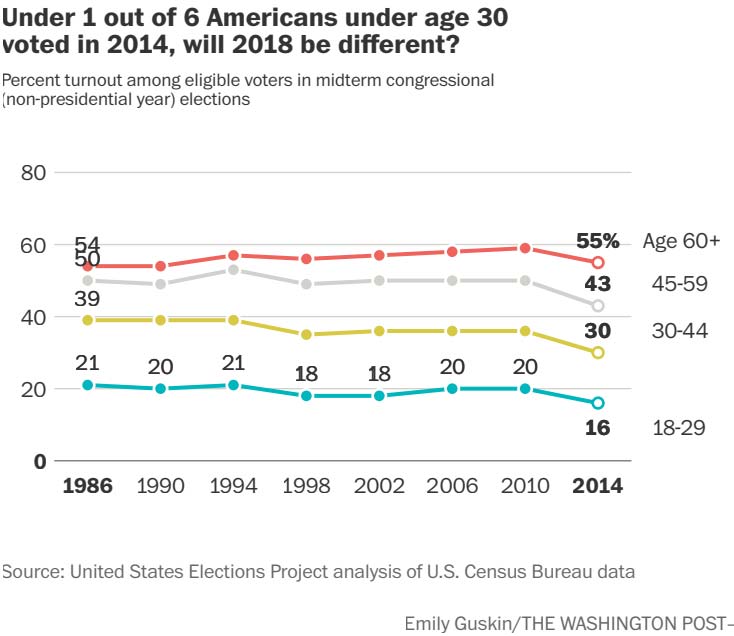 The surge in activism among young Americans about gun laws after February's Parkland, Florida, shootings, and that group's general disapproval of President Donald Trump, has raised the prospect that they will turn out at higher rates in this year's midterm elections.

An early sign backed up the possibility: voter registration data. Separate analyses by The New York Times and Democratic voter database firm TargetSmart Communications found that younger adults made up a greater percentage of new voter registrants across several states.

But a Washington Post analysis of voter registration data tracked by Aristotle Inc. finds hardly any change in the overall share of registered voters ages 18 to 29 since the Parkland shootings. That, coupled with low enthusiasm from the youngest voters and the group's history of anemic turnout in midterm elections, does not point to under-30 voters having a huge impact in November.

The new analysis compared the share of all registered voters ages 18-29 in eight battleground Senate states before and after the Feb. 14 Parkland shooting.

In Florida, where the Parkland shooting occurred, Aristotle data shows 16.2 percent of registered voters before the shooting were between 18 and 29. That is almost identical to the percent in mid-April, the last time we got new data from that state.

In Ohio, where Aristotle's data was updated more recently, young adults made up 17.4 percent of registered voters before Parkland and 18.2 percent in June, less than a one-point change.

Looking across the battleground states for which data is available, the share of registered voters ages 18 to 29 increased by an average of 0.6 points from before the Parkland shooting, a bump unlikely to exert a significant impact on this fall's elections.

The other states examined included West Virginia, where the share of voters ages 18-29 was up 0.5 percentage points since before the Parkland shootings to 17.2 percent of voters according to the latest numbers; Nevada (up 0.4 points since Parkland); North Carolina (also up 0.4 points); Missouri (up 0.3 points); Virginia (up 0.1 points); and Arizona (unchanged).

Many people who register to vote do not show up on Election Day, and young people are by far the least likely age group to cast ballots, especially in midterm elections. The United States Elections Project analyzed U.S. Census Bureau data tracking turnout in midterm elections since 1986 and found that 16 percent of eligible voters ages 18 to 29 turned out to vote in the 2014 midterms. It was the lowest for any election since 1986, though turnout among this age group was never higher than 21 percent in midterms over this period.

Looking ahead to November, the latest polling shows that younger registered voters see voting as less important than those older. According to a July Post-Schar School poll, a third (33 percent) of registered voters ages 18 to 29 said voting in this year's midterms was "extremely important," a smaller share than those 30 to 49 (46 percent), 50 to 64 (48 percent) and 65 and older (57 percent). While the question above was asked for the first time this year, national Post-ABC polling provides a comparison of young adults' interest in voting this year with the 2014 midterm elections. Averaging across polls in January and April of this year, 46 percent of registered voters under 30 said they are "absolutely certain to vote." That compares to 54 percent of 18-to 29-year-olds who were certain to vote in April and June of 2014, a difference that is not statistically significant. In both years, older voters were more likely to say they were certain to vote.

At least one poll shows signs that young Americans are more engaged in this year's midterm elections. A Pew Research Center survey looked at a broader swath of millennials ages 22 to 38, finding 62 percent said they are "looking forward" to midterm elections, up from 46 percent in 2014 and 39 percent in 2010.

We'll have to wait until November to know whether such optimism will translate to higher turnout. So far, voter registration data does not point to a shift that could swing more than the tightest of elections .