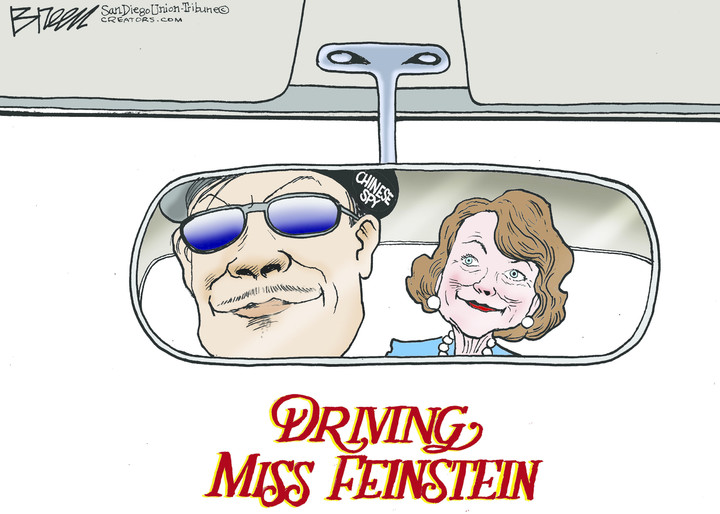 Imagine if it emerged that the Republican chairman of the House or Senate intelligence committee had a Russian spy working on their senate staff.

Think it would cause a political firestorm? Well, this week we learned that Sen. Diane Feinstein, D-Calif., had a Chinese spy on her staff who worked for her for 20 years, who was listed as an "office director" on payroll records and served as her driver when she was in San Francisco, all while reporting to China's Ministry of State Security though China's San Francisco Consulate. The reaction of the mainstream media?

Feinstein acknowledged the infiltration, but downplayed its significance.

"Five years ago the FBI informed me it had concerns that an administrative member of my California staff was potentially being sought out by the Chinese government to provide information" Feinstein said in statement -- which means the breach took place while Feinstein was heading the intelligence committee.

But, Feinstein insisted, "he never had access to classified or sensitive information or legislative matters" and was immediately fired. In other words: junior staffer, no policy role, no access to secrets, quickly fired -- no big deal.


But it is a big deal. I asked several former senior intelligence and law enforcement officials how serious this breach might have been. "It's plenty serious," one former top Justice Department official told me. "Focusing on his driver function alone, in Mafia families, the boss's driver was among the most trusted men in the crew, because among other things he heard everything that was discussed in the car."

A former top CIA clandestine officer explained to me what the agency would do if they had recruited the driver of a senior official like Feinstein. "We would have the driver record on his phone all conversations that Feinstein would have with passengers and phone calls in her car. If she left her phone, iPad or laptop in the car while she went to meetings, social events, dinners, etc., we would have the driver download all her devices.

If the driver drove for her for 20 years he would probably would have had access to her office and homes. We would have had the source put down an audio device in her office or homes if the opportunity presented itself. Depending on the take from all of what the source reported, we would use the info to target others that were close to her and exhibited some type of vulnerability."

"In short," this officer says, "we would have had a field day."

It seems improbable that Feinstein never once discussed anything sensitive in her car over a period of years. But let's assume that Feinstein was extraordinarily careful and never discussed any classified information in front of her driver or on any devices to which he had access. Even so, one former top intelligence official told me, "someone in that position could give an adversary a whole bunch on atmospherics and trends and attitudes which are from time to time far more important than the things we call secrets."

He added "It's like [having access to her] unclassified emails." (And we all know no one ever exposes classified information on unclassified emails). Washington is understandably focused on the threat from Russia. But according to FBI director Chris Wray, "China from a counterintelligence perspective represents the broadest, most pervasive, most threatening challenge we face as a country." It was China, after all, which hacked the Office of Personnel Management in 2015, stealing the SF-86 security clearance forms of many thousands of executive branch employees in the most devastating cyberattack in the history of our country.

Beijing has successfully recruited FBI agents and State Department employees as spies, and has used information from U.S. informants to kill dozens of CIA sources inside the regime. And now, we know they recruited a high value senate staffer who worked in immediate proximity to the head of the senate intelligence committee.

Feinstein owes the country a detailed explanation of how she let a Chinese spy into her inner sanctum. And the media should give this security breach the same attention they would if it involved Russia and the Republicans.