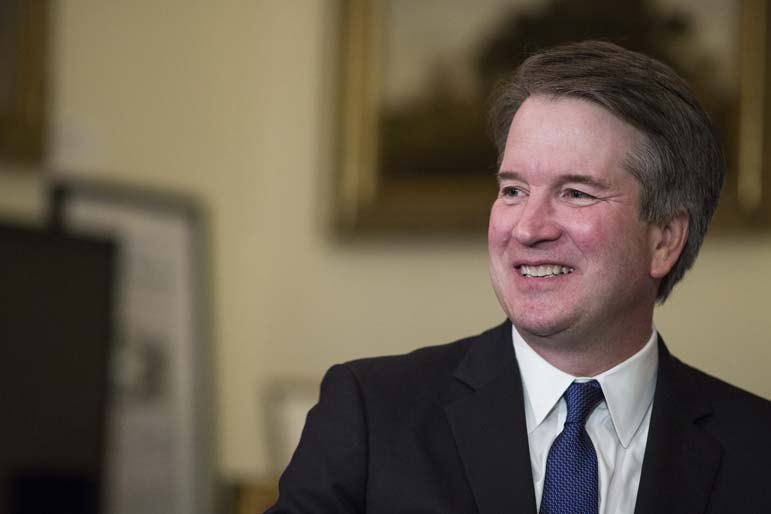 ORONO, Maine --- Democrats have all but acknowledged that they are unable to stop the Senate from confirming Trump nominee Brett Kavanaugh for the Supreme Court this fall.

Moderate Republican senators such as Susan Collins of Maine, the most closely watched GOP swing vote, are sending strong signals that they will back Kavanaugh. Several Democrats facing difficult reelections this year have indicated they are open to voting for the judge. And leaders of the resistance are already delivering post-mortem assessments and blaming fellow Democrats for a looming failure.

Barring a major revelation, the Senate is poised to install the 53-year-old Kavanaugh on the high court and take the next step toward fulfilling President Donald Trump's pledge to remake the Supreme Court - and the wider federal judiciary, potentially for decades.

"There were too many Democrats who decided out of the gate that this was an unwinnable fight," said Brian Fallon, the executive director of Demand Justice, a leading anti-Kavanaugh group that will continue to battle the nomination.

The fizzling of the campaign to block Kavanaugh underscores the relative weakness of the Democrats, who had promised their political base a pitched battle to protect the landmark Roe v. Wade abortion ruling and other liberal causes. From the moment Trump introduced Kavanaugh to the nation at a prime-time White House ceremony, Democratic leaders sought to portray the would-be justice as a far-right ideologue and targeted a handful of senators in both parties seen as persuadable.

But Democrats are likely to watch helplessly as the Senate confirms Trump's second Supreme Court pick after Justice Neil Gorsuch. In addition, Republicans have pushed through 24 circuit court judges, a record number for a president in his first two years in office, and two more are in the queue when the Senate returns next week.

Senate Majority Leader Mitch McConnell, R-Ky., who sees a conservative judiciary as the legacy of the GOP's grip on all levers of government, spoke confidently on Friday about Kavanaugh's prospects. "He'll get confirmed. It won't be a landslide, but he'll get confirmed," McConnell told WKDZ radio in Cadiz, Kentucky.

Hours later, Senate Republicans announced that confirmation hearings before the Judiciary Committee would begin the first week in September.

"We always maintained it was an uphill fight, but we have a chance to win and we will keep fighting," said Senate Minority Leader Charles Schumer, D-N.Y.

Collins, who plans to meet with Kavanaugh later this month, is showing no signs that liberal pressure is getting to her. She decried the "overblown" rhetoric from the sharpest Kavanaugh critics. "That is certainly not what is going to determine my decision at all," she said.

Manchin met with Kavanaugh for two hours last month, with the senator calling the session "very productive." Heitkamp and Donnelly will hold their one-on-one sessions with Kavanaugh next week. Some Democrats expect the three senators, who face reelection in solid Trump states, to vote for the judge.

Here in Maine, Collins has spent two decades building a reputation as a moderate willing to break ranks with her party on some issues, as she did last year in opposing the GOP repeal of the Affordable Care Act.

That health-care vote and Collins' support for abortion rights initially gave anti-Kavanaugh forces hope. They have rooted their opposition effort in casting the judge as a threat to tilt the court toward rolling back ACA protections and overturning Roe v. Wade, the 1973 decision legalizing abortion.

But those ambitions have faded as the reality of Collins' record on judges has set in. She has been a largely reliable Republican vote, backing Kavanaugh in May 2006 when President George W. Bush nominated him to the U.S. Court of Appeals for the District of Columbia Circuit. And she indicated this week that she is open to supporting the nominee.

Collins has never voted against a Supreme Court pick, giving Democratic and Republican presidents their choice.

In a testament to her brand in the state, at a university grant announcement this week a professor asked Collins to kick off an experiment testing a bridge, because she has "spent her whole career building bridges."

"I want to look at his entire record," Collins said. "You know, we're very fortunate with Judge Kavanaugh because he has been on the Circuit Court for more than 12 years. He's personally authored more than 300 opinions, and he's participated in many more. So we have a pretty full record on which to evaluate him."

Local activists have been regularly showing up at Collins' offices to make personal appeals for rejecting Kavanaugh, including warnings that a court with him on it could strip ACA protections for people with preexisting medical conditions.

One afternoon at Collins' Portland office, 10 people spoke of their concerns. A pastor's hands shook as he discussed the urgency of protecting people with preexisting conditions; he told the story of his nephew who was diagnosed with a brain tumor at age 15.

Marie Follayttar Smith's voice cracked as she explained how she manages a condition that could put her in a coma. "I ask that she vote to protect someone like me," the co-founder of Mainers for Accountable Leadership told a Collins staffer, who listened patiently and jotted down notes.

Even as they made their pleas, there was a sense among some in the group that it would not be enough to sway Collins. "I'm feeling a little bit pessimistic," said Genevieve Morgan, who recently met with the senator.

A constellation of national groups is trying to amplify concerns about health care, with advocacy in Maine and other states. Organizations including Demand Justice, Planned Parenthood and Protect Our Care are organizing rallies, airing TV ads and assisting efforts to contact Collins' office. They plan to ramp up their activities in the coming weeks in hopes of turning the tide.

But Collins issued a stern warning. "I always want to hear from my constituents," she said. "What is not effective is when these advocacy groups spend millions of dollars on attack ads, on jamming my phone lines with out-of-state callers that prevent Mainers with real problems from being able to get through."

Collins said she has spoken to residents who repeatedly called her office to discuss problems with federal agencies and eventually decided to show up in person after getting busy signals.

One Nation, an organization affiliated with McConnell, plans to go up with a TV ad in Maine next week supporting Collins' current stance on the Kavanaugh nomination as she moves toward a decision, according to a person familiar with the plans.

While the groups try to press their case, the intensity of the campaign against Kavanaugh has not reached the level of last year's fight to preserve the health-care law, Republicans and Democrats agreed. Many people, including senators, are not convinced Kavanaugh presents the clear existential threat to the health-care law posed by the GOP repeal bill.

"I'm going to care about whether that, in my judgment, that this could result in the rollback of preexisting conditions," Heitkamp said last month. "But, I think it's going to be very, very difficult to gauge that based on the fact that no one is going to answer a question that basically says, 'How would you vote in this case?' "


Pam Cunningham, who visited Collins' office in Portland, Maine, said the multiple issues at stake in the court fight have made it more challenging, compared with last year's health-care showdown.

"I think for some people, it's confusing - it's like there's so much going on. With the ACA, the messaging was easier," she said. "So it is harder. We feel like we have to do more as far as drilling down the message."

Democratic senators facing reelection in Republican-leaning states, top targets of the anti-Kavanaugh forces, said they are not experiencing extraordinary levels of anger about the Kavanaugh votes.

"This process, from my perspective as a senator, isn't significantly different than what it was on the last Supreme Court nominee," said Sen. Claire McCaskill, D-Mo. "Frankly, the calls are about even. Maybe slightly more 'Vote no.' "

"No matter how I vote," McCaskill added, "there's going to be a lot of people who are not going to be happy with it. This is not a political winner, quote-unquote, no matter how the vote is ultimately decided for me."

Some activists fighting Kavanaugh's nomination wonder whether the urgent mission they began a month ago has been reduced to a symbolic exercise.

Some have lashed out at fellow Democrats, including Schumer, for not embracing their cause with more vigor.

Schumer opposes Kavanaugh's nomination and has been critical of the GOP's handling of the nominee's extensive paper trail, but he has given his red-state Democrats space to make up their minds rather than using hardball tactics. Their races are crucial to the battle for the majority in November's midterm elections. "Punishment is not how this place works," Schumer said in a July interview.If Schumer publicly pressured Democrats to vote no, according to a person with knowledge of Democratic leadership's thinking, it would make it harder for them to do so, since they are trying to demonstrate independence from the national party.

His posturing has frustrated activists on the front lines of the Kavanaugh fight.

"He speaks and acts in contradictions," said Smith, who organized the visit to Collins' Portland office.