In search of family in a small-town graveyard 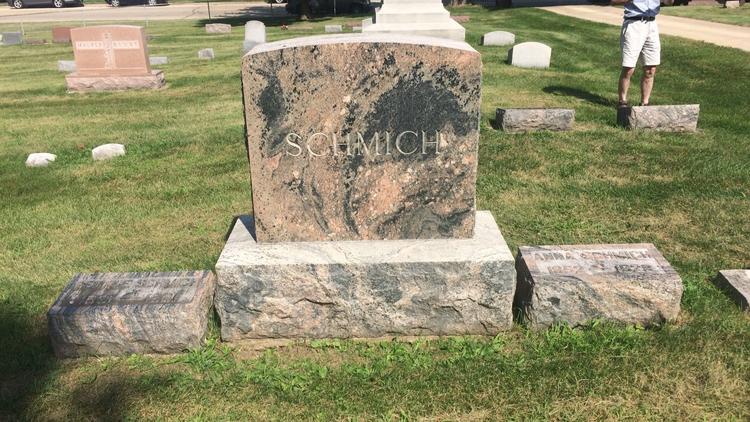 One of the gravestones the author found as she searched in a Catholic cemetery in Freeport, Ill. Mary Schmich/Chicago Tribune

When you drive west out of toward the , into a land of small towns, hills and cornfields, one thing you notice is the graveyards.

You're never very far, it seems, from a cluster of old headstones poking out of the grass and resting under the trees, reminders of people doomed to be forgotten.

I was new to when the reader, who had noticed my byline, wrote to say, "If you want to find your Schmich ancestors, go to the cemetery in ."

I'd never heard of or met anyone outside my immediate family with our weird last name. Curious, I opened an atlas, and there, in the northwest corner of Illinois, was , population 26,000 or so, settled largely by Germans.

Mildly interesting, I thought at the time, but not compelling enough to demand a two-hour drive.

I appreciate my relatives who have that gene. I don't. Neither did my father.

My dad rarely talked about the people or place he came from. His kids knew he was from , which to us, growing up in and later , sounded as foreign as Mesopotamia.

We knew vaguely that in his hometown of , there had been a church and an Irish Catholic church and that marrying across the boundaries was taboo. His Irish-bred mother and German-bred father married anyway, or so the story went.

The only time I remember my father elaborating on his ancestry was at the end of a boozy dinner when he told us that some Schmichs had come from the region of Alsace-Lorraine, where meets , and had run a brewery in America.

I liked the idea that the unromantic name "Schmich" might be vaguely French, and having beer-makers in the family seemed both exotic and fitting.

Around the time the Tribune reader wrote me about the cemetery, I was in an antiques store in Galena where I stumbled upon some amber beer bottles embossed with the name "Schmich Bros Brews" and, on the back, "Freeport, Ill."

The brewery to graveyard link became clear. I bought the bottles. But only recently did I feel the urge to find the graves.

On that day recently, my brother and I located the , via Google maps, not far from downtown. There was no registry visible. No one answered when we knocked on the little yellow building where, another visitor said, someone could guide us.

We began pacing the rows.

Up and down the grass we went, glancing left and right.

It was hot. The quest was pointless. And, really, who cared? After a futile hour, we got back in the car, ready for a beer.

But abandoning a quest, any quest, is for cowards. It's a bad habit of mind, even if the quest is one you tell yourself doesn't matter. If you start it, finish it.

So maybe we were looking in the wrong place? What about that Catholic cemetery we'd passed at the entry to town?

We drove over, agreed that we'd browse briefly and then admit that we had no more time to waste on dead people we'd never met.

We parked. Got out. And a few rows in, there they were.

I've since learned that if we'd wanted to travel deeper into the cemetery, we would have found more. But these three felt like victory, and, more than I expected, like family, and not only because our father's name was .

What I realized later was that finding the dearly departed Schmichs was only part of the discovery. Strolling through the graveyards was an encounter not merely with family history but with the collective history of our Midwestern world, when the Germans were the newcomers looking for a place to call home.

I left thinking that knowing your history is good. Being excessively identified by it is not.

There's nothing like a graveyard to make the point that we all come and go, people replaced by new people, old immigrant groups followed by new ones, all of us fleeting.