A woman found human ashes in a novelty she bought at Goodwill. Her daughter went searching for the rightful owner 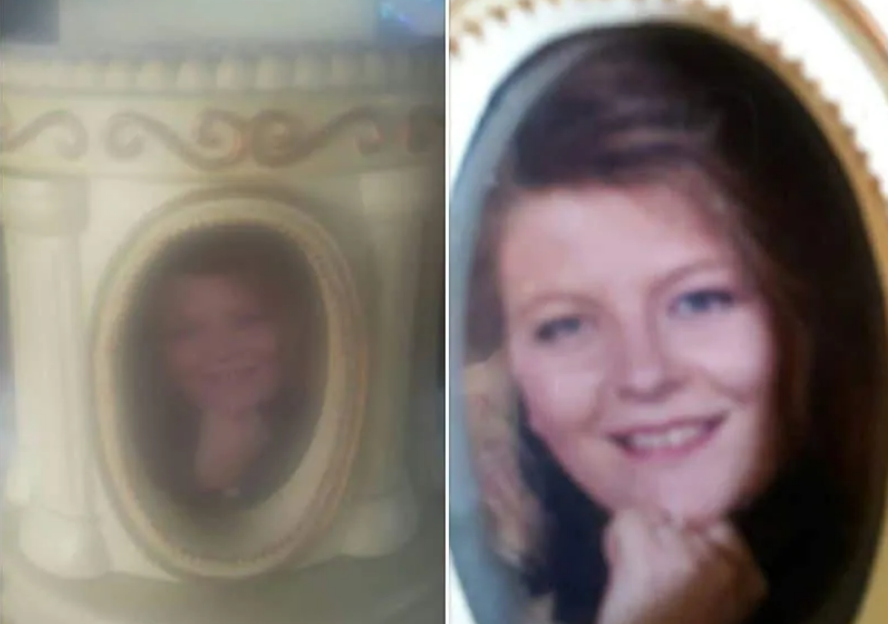 Jeni Kinney posted these images of Tammy Ellis on Facebook.

She'd just bought a decorative glass globe at the Goodwill store near her Missouri home - and when she opened up the back of it on the drive home, she saw something alarming inside: human ashes.

"She said, 'Jeni, what do I do? I bought something and it has someone's ashes in it,' " Kinney recalled in an interview with The Washington Post.

The globe, which cost $2 and had a printed prayer inside the glass dome, played the song "Amazing Grace" when a dial was turned. It also displayed a photo of a smiling woman.

Kinney's mother, Anita Minks, had picked it up at the thrift store on July 31 thinking she'd place a photo of her son in it. Her son had passed away 15 years ago, at age 33, and she was hoping to add to his shrine in her living room.

But when she saw the ashes, she knew something had gone terribly wrong. The ashes were a familiar sight to her because she had her son's ashes in an urn in her home.

Minks, 65, asked her daughter on the phone: Should I bury the ashes I found in the globe or take them to a river?

But Kinney thought they should at least try to find the rightful owner.

So she posted two grainy photos with this query: "My mom bought this little fountain thing at goodwill in farmington this morning..was going to put my brothers picture in. Has a sweet prayer and sings amazing grace. Well she gets home and it has ashes in it. This beautiful ladys picture is in it as well. Please help find her family."

By the following day, her post had been shared more than 1,000 times and there were dozens of comments, including one from someone who said she knew the smiling woman in the picture.

The commenter said: "Omg that's momma Tammy!!!!!!!! Thats one of my good friends mom . . . Seriously . . . Omg thank you for not throwing it out. This momma was everything to her daughter I mean everything!!!

So Kinney contacted the daughter, Jasmin Ellis, 22, on Facebook. Ellis said she was stunned when she saw the photo of her mother, who died of cancer in 2013, just two days shy of her 40th birthday. The photo was taken in happier times, years before Ellis's mother became ill, and before her father died when a tree he was cutting down fell on him.

She took a moment to process it.

"I went through a lot of emotions real quick. Who would just donate somebody's stuff like that? When you look at it you can tell it's a personal item. You can tell it meant something," Ellis said. "I got angry and then sad and then happy they found it. I was lucky it happened that way."

It turned out that her mother, Tammy Ellis, bought the globe in a hospital gift shop toward the end of her life. She liked the prayer inside that said, "Your presence we miss, your memory we treasure, loving you always, forgetting you never."

Tammy Ellis gave it to her best friend and told the friend that she wanted her to have it and place some of Ellis's ashes inside when she died, Jasmin Ellis said. Several family members also were given some of the ashes, including Jasmin Ellis.

"My mom was a lovable, lovable person," Ellis said. "She wanted everybody to have a piece of her."

After Tammy Ellis died, the friend followed instructions and put her ashes and the photo in the globe. She recently was preparing to move and put her things, including the globe, in temporary storage. Her storage unit was burglarized, and the globe somehow ended up at Goodwill, Ellis said.

Ellis found out the globe was missing after she saw Kinney's Facebook message.

Ellis responded to the message, feeling incredulous that her mother's ashes and globe were sold in a thrift store.

"They let me know they found it at Goodwill, that they literally bought it for $2," she said.

But she wanted to make sure she got it back.

So that evening, she drove about an hour to Kinney's home. By that time, she had learned that the people who had her mother's ashes were simply trying to help. There were hugs and many tears.

"I wanted to cry, I wanted to laugh, but really I just cried," Ellis said.

She was overwhelmingly grateful that Kinney found not only her mother's ashes but her.

"I know they took time out of their day to do the right thing," Ellis said. "They took another person's feelings into account, and that's awesome. You really don't see that nowadays. I'm so grateful for those people."

Ellis said she has the globe on a shelf in her bedroom, where it will stay.

"I set her next to my dad, where she needs to be anyways," Ellis said.