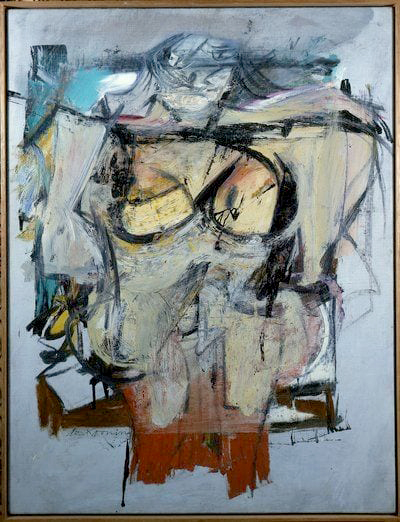 "Woman-Ochre" by Willem de Kooning. Courtesy of University of Arizona Museum of Art

Jerry and Rita Alter kept to themselves. They were a lovely couple, neighbors in the small New Mexico town of Cliff would later tell reporters. But no one knew much about them.

They may have been hiding a decades-old secret, pieces of which are now just emerging.

After the couple died, a stolen Willem de Kooning painting with an estimated worth of $160 million was discovered in their bedroom.

More than 30 years ago, that same painting disappeared the day after Thanksgiving from the University of Arizona Museum of Art in Tucson.

And Wednesday, the Arizona Republic reported that a family photo had surfaced, showing that the day before the painting vanished, the couple was, in fact, in Tucson.

The next morning, a man and a woman would walk into the museum and then leave 15 minutes later. A security guard had unlocked the museum's front door to let a staff member into the lobby, curator Olivia Miller told NPR. The couple followed. Since the museum was about to open for the day, the guard let them in.

The man walked up to the museum's second floor while the woman struck up a conversation with the guard. A few minutes later, he came back downstairs, and the two abruptly left, according to the NPR interview and other media reports.

Sensing that something wasn't right, the guard walked upstairs. There, he saw an empty frame where de Kooning's "Woman-Ochre" had hung.

At the time, the museum had no surveillance cameras. Police found no fingerprints. One witness described seeing a rust-color sports car drive away but didn't get the license plate number. For 31 years, the frame remained empty.

After their deaths, the painting was returned to the museum. The FBI is investigating the theft.

Did the quiet couple who lived in a three-bedroom ranch on Mesa Road steal "Woman-Ochre" and get away with it?

De Kooning, who died in 1997, was one of the most prominent painters of the midcentury abstract expressionist movement. "Woman III," another painting in the same series as "Woman-Ochre," sold for $137.5 million in 2006. The works of de Kooning remain among the most marketable in the world.

The Alters had moved to Cliff (population 293) in the late 1970s or early 1980s, according to the Silver City Daily Press. H. Jerome Alter, who went by Jerry, had been a professional musician and a teacher in New York City schools before retiring to New Mexico, he wrote under "About the author" in "Aesop's Fables Set in Verse," a book he published in 2011.

"His primary avocation has been adventure travel," the biographical sketch says, noting that he had visited "over 140 countries on all continents, including both polar regions."

Rita Alter, who died in 2017 at the age of 81, had worked as a speech pathologist at the local school district after the couple moved to New Mexico, the Daily Press reported. Her former co-workers remembered her as "pleasant but quiet," a friendly woman who was good with children but didn't volunteer much information about her life.

In 2011, a year before his death, also at the age of 81, Jerry published a book of short stories, "The Cup and the Lip: Exotic Tales." The stories were "an amalgamation of actuality and fantasy," he wrote in the preface. Though none were literary masterpieces, one stands out in the wake of the de Kooning discovery.

"The Eye of the Jaguar," concerns itself with Lou, a security guard at an art museum. One day, a middle-aged woman and her 14-year-old granddaughter show up. The older woman asks Lou about the history of a prized emerald on display. Six months later, she and her granddaughter return, then leave in a rush.

"Wow, those two seem to be in a hurry, most unusual for visitors to a place such a this," Lou thinks. He reinspects the room and realizes the emerald is gone. Running to the door, he sees the pair speeding away and runs out to stop them. The older woman floors the accelerator, crashing into Lou and killing him. Then the two speed off, leaving behind "absolutely no clues which police could use to even begin a search for them!"

Jerry Alter's fictional tale ends with a description of the emerald sitting in an empty room. "And two pairs of eyes, exclusively, are there to see!" it concludes.

He could just as easily have been describing the de Kooning. But nobody thought of that until the painting was discovered in the Alters' bedroom, where it had been positioned in such a way that you couldn't see it unless you were inside with the door shut.

After Rita Alter died, her nephew, Ron Roseman, was named executor of the estate. He put the house on the market and began liquidating its contents. On Aug. 1, 2017, antique dealers from the neighboring town of Silver City came to see what was left.

One of the men, David Van Auker, would later recall at a news conference that he spotted "a great, cool midcentury painting." They bought it, along with the rest of the Alters' estate, for $2,000.

Silver City, an old mining town near the Gila National Forest, has a high concentration of artists. So it didn't take long for someone who recognized the painting's significance to wander into Manzanita Ridge Furniture and Antiques.

"It probably had not been in the store an hour before the first person came in and walked up to it and looked at it and said, 'I think this is a real de Kooning,' " Van Auker told KOB 4, a TV station in Albuquerque. "Of course, we just brushed that off."

Then another customer said the same thing. And another.

It was becoming evident that the painting might be worth more than they had originally thought. Van Auker and his partners, Buck Burns and Rick Johnson, hid it in the bathroom.

Once the painting had been secured, Van Auker did a Google search for de Kooning. That's when he spotted an article about the theft of "Woman - Ochre" and called the museum.

"I got a student receptionist, and I said to her, 'I think I have a piece of art that was stolen from you guys,' " he told Dallas-based news station WFAA. "And she said, 'What piece?' And I said, 'The de Kooning.' And she said, 'Hold, please.' "

Miller, the museum's curator, told WFAA that what made her pause was when Van Auker described how the painting had cracked, as if it had been rolled up. It was a detail that no one could have invented. The dimensions were an inch off from "Woman - Ochre," which corresponded with it being cut out of the frame.

Van Auker took the painting home and stayed up all night with his guns, he told Tucson Weekly, getting startled every time he heard a branch scrape against the side of the house.

The next night, a delegation from the museum arrived. When Miller walked in, Van Auker told the Daily Press, the room turned silent.

"She walked up to the painting, dropped down on her knees and looked. You could just feel the electricity," he recalled.

Authentication would later confirm that it was a perfect match for the missing de Kooning.

Over the past year, a handful of clues potentially linking the Alters to the theft have surfaced.

Several people told the New York Times that they had a red sports car, similar to the one spotted leaving the museum. The car also appears in home movies obtained by WFAA.

Some of the couple's photos show Rita in a red coat like the one that the woman at the museum had been wearing, KOB 4 reported. And Ruth Seawolf, the real estate agent who put the Alters' house on the market, told the Silver City Sun News that she had taken home a luggage set and, inside, found glasses and a scarf that match the police description.

"In the Alters' day planner from 1985, they took meticulous notes about what they ate, where they went, and the medications they had," KOB 4 points out. "On Thanksgiving 1985, they mysteriously left it blank."

And now there's the family photo showing they were in Tucson the night before the painting was stolen.

The investigation has been underway for a year now. The FBI has declined to comment until the case is closed.

People who knew the Alters find it hard to think of them as criminal masterminds. And opinions are mixed about whether a sketch of the suspects resembles the couple.

"Composite sketches, in hindsight, resemble the faces in the Thanksgiving photo, down to their position side by side," the Arizona Republic wrote.

The Alters had two children, Joseph and Barbara. Reporters from multiple news outlets, including The Washington Post, have been unable to locate either child. Several of the couple's acquaintances told the Times that Joseph Alter has severe psychological problems, and has been institutionalized on and off since the 1980s.

Jerry Alter's sister, Carole Sklar, told the New York Times that the idea that her brother, his wife, or their son could have stolen the painting was "absurd," as was the theory that her brother disguised himself in women's clothing.

"I can't believe Rita would be involved in anything like that," Mark Shay, one of her former co-workers, told the Daily Press. "I could see them buying a painting not knowing where it originally came from, maybe."

Museum officials, however,told the Arizona Republic that the painting only appears to have been reframed once during the 31 years it was missing, suggesting it had only had one owner during that time.

Something else doesn't add up. Jerry and Rita Alter worked in public schools for most of their careers. Yet they somehow managed to travel to 140 countries and all seven continents, documenting their trips with tens of thousands of photos.

And when they died, they had more than a million dollars in their bank account, according to the Sun News.

"I guess I figured they were very frugal," their nephew, Ron Roseman, told WFAA.

Roseman couldn't be reached for comment on Thursday evening. But not long after "Woman - Ochre" resurfaced, he told ABC13 that he couldn't imagine that his aunt and uncle had stolen the painting.

"They were just nice people," he said.