No travel until our kids reach their 30s? 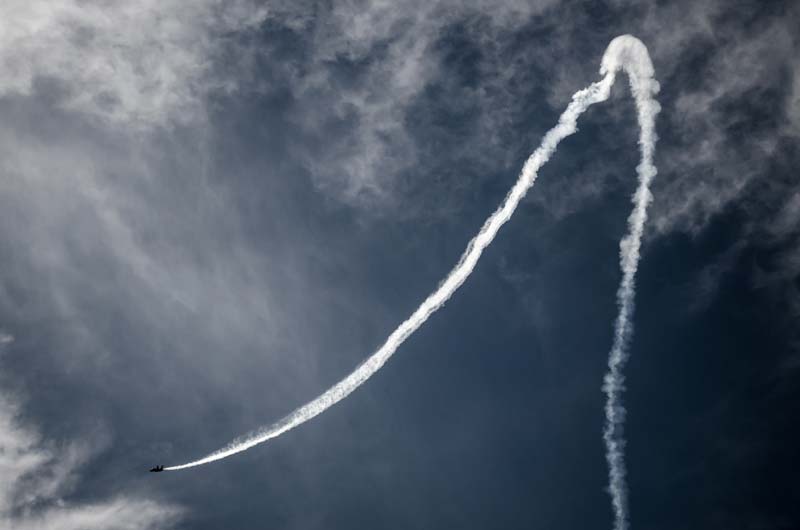 "There's nothing worse than flying . . . Right . . . Next . . . To a screaming kid," I overheard a woman saying while I was waiting for my torta sandwich during an O'Hare layover.

Yeah, there is, I wanted to reply: Flying with a screaming kid. Or, in my case, two.

When I returned to the gate with the sandwich, my wife, Marissa, asked about the bag's contents.

"I know. And we still have four more hours of flying," she said, mishearing.

Then the 2-year-old pinched the 4-year-old. Crying ensued.

Flying with kids wasn't always traumatic. When the ratio was 2:1, parenting on flights from New York to Hawaii, or internationally, was manageable. But when we had a second child, things changed, especially since our younger daughter refuses to sleep on planes and takes a man-stung-by-bees approach to alert passengers of her discomfort, including throwing herself violently into the aisle. That, coupled with the reality that we now have to pay for the seat she refuses to occupy, has made family flying insufferable.

But I'm getting ahead of myself. The torture of flying with young children starts the week preceding the journey.

There's pre-trip anxiety regarding car seats: Do I check or gate-check the car seat? If I bring it onto the airplane, will my child be more comfortable and restrained? Or will they freak out because their feet are touching the seat in front of them? If I don't bring car seats because the company that I booked transportation with pinky-swore that they would have two car seats waiting for me, what are the odds that they'll have only one car seat? (One-hundred percent.) And what are the odds that this seat will buckle properly? (Zero percent.)

My favorite is the line for security because I've always wanted to be on a game show. The Show's Announcer - of course that's what TSA stands for. Duh - usually offers this challenge: While your pants are falling down because your belt is still in the scanner, and with five minutes remaining before your gate closes, can you tell me. . . . What's in the bag?

"A baby?" he repeats, studying the scanner screen.

When he finds the doll and kilos of nontoxic crayons in my daughter's unicorn backpack, I'm awarded with the chance to Clean. Up. His. Mess.

So I repack, right the strollers, shoulder a rucksack, collect our scattered items from security trays, grip a car seat, gather the child fleeing for Terminal B, and race wildly toward Terminal C. Yea, vacations!

For those paying close attention, we haven't even boarded the plane. I'll use a sonnet to present the rigmarole of flying with children:

Fasten up and focus on iPad screen.

Nobody wants to hear your death knell scream.

Uncanny that urge to pee on takeoff.

Spilled your drink and snack, sure, why the hell not?

You made sister cry 'cause you flicked your snot.

Daddy tries to help Mom, but you rebuff.

This is why my family is taking a hiatus from the friendly skies. But it doesn't have to mean no travel until our kids reach their 30s.


The revelation came last summer. We had just faced a version of the above sonnet for the 21,600-second flight to Seattle. After collecting our rental car and installing both car seats (and both children), I pressed the accelerator. The first sounds of peace filled our ears. The kids were asleep.

People always complain about time spent in cars. They groan about the length of road trips or the unbearable traffic jams. I used to loathe driving, too, but mostly because of the maniacs on the road. However, as a parent who still wants to travel, the maniacs on the road are preferable to my maniacs in the sky.

On our two-week road trip through Washington and Oregon, the rental car became a Zen retreat and entertainment center. We consumed family podcasts like "Wow in the World" and used apps like Waze and Roadtrippers to avoid traffic or to break up long journeys with interesting stops along the way, respectively.

During multiple six-hour drives, the kids slept for the majority of the time. When they found good reason to scream their heads off - ie.: Marissa paused in her singing of "I'm Bringing Home a Baby Bumblebee" -- just knowing that we didn't have to apologize to other passengers allowed Marissa and I to exchange affectionate glances, as if our wedding song had come on the radio. If the tantrums became intolerable we pulled over.

Quite often, our breaks were perfectly timed. From Seattle to Walla Walla, for instance, we stopped at the J. Bookwalter Winery for literary-themed cabernets, while our adorable little antagonists resolved their conflicts, outside of hearing range, in a grassy field beside the establishment. In Oregon, instead of Benadryling our kids for the journey ahead like some flying parents do - you know who you are - we exhausted them with stops at fruit farms and an alpaca ranch. Then we set off on the long, lovely drive.

Even "I have to pee" sounded like a melody in our rental car. On airplanes, the children only announce such a thing when meal carts are obstructing the path. But on the road, we pulled over anywhere there was a shoulder.

But it was time to return the rental car and fly home.

"How long would it take to drive back to New York?" Marissa asked when we saw the first sign for Portland's airport.

It sounded nice, but we flew home to the chaos. To the sonnet.

At one point during the flight, I looked across the aisle at my wife. The children smothered her. (I should note, for my reputation's sake, the kids refuse to sit with me.) The torture in her eyes said it all: No more flying.

"Road trip," I mouthed, before ingesting the torta.

Lederman is the author of the memoir, "A World Erased." He writes the travel blog Somewhere or Bust. His writing has also appeared in the Economist, Boston Globe, Miami Herald, Slate, and elsewhere.