4 ways Trump could go after Google 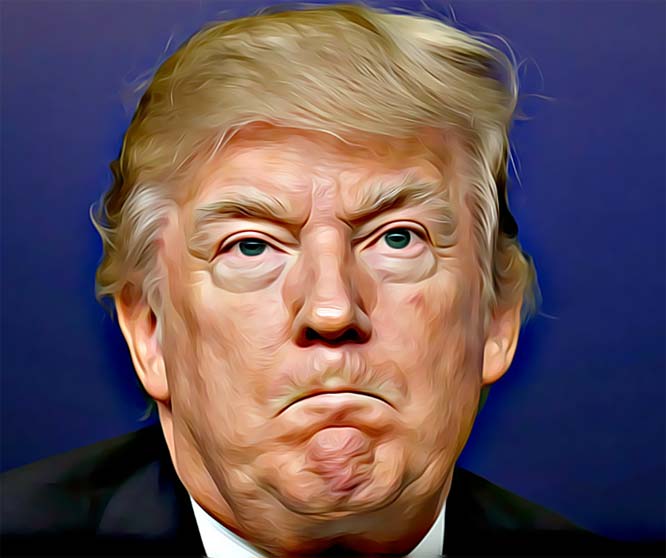 President Donald Trump and his advisers are looking at ways to regulate Google and its search engine. The purported reason behind this effort is Trump's claim that Google "suppresses" right-wing viewpoints in its search results and is discriminating against conservatives - despite Google's denials and outside research finding little evidence for the assertion.

Still, the mere suggestion that the government could come down on Google and the rest of the tech industry raises a natural question: What exactly can Trump do?

The answer: Probably not much, at least on his own, because of the limits of presidential power. But below, we go over some of Trump's options - and how they could play out. (Google didn't immediately respond to a request for comment.)

When Trump tweeted on Tuesday that Google's practices "will be addressed," he didn't elaborate. But the easiest way he could "address" the issue is simply to continue amplifying the matter using his substantial presence online and in his remarks from the Oval Office, experts say.

Trump has already tweeted three times since late July about alleged discrimination by tech platforms against conservatives - suggesting that this week's complaint may not be the last.

This approach may have benefited Trump already. On the same day as his tirade against Google, Trump's campaign sent text messages to his supporters highlighting his feud with the tech company and asking for donations ahead of this year's midterm elections.

While it may not have a direct impact on Google in the short term, rallying Trump's base by stoking anger at the tech industry could have longer-term effects.

In recent months, both Facebook chief executive Mark Zuckerberg and Twitter chief executive Jack Dorsey have gone out of their way to meet with conservatives as a way to show their receptiveness to right-wing complaints of bias. Trump's attacks - and the threat of regulation - give tech companies an even greater vested interest in cultivating goodwill with conservatives, according to Matthew Dickinson, a political scientist and presidential scholar at Middlebury College.

Trump could also meet with tech execs to discuss the issue, particularly as the tech industry lobbies the White House for business-friendly privacy rules. A draft proposal could emerge by this fall.

Trump's audience isn't solely made up of his own voters. His tweets are closely watched by high-level members of his own party, particularly on Capitol Hill. By calling on Congress to hold more hearings or to rein in Google and other tech companies, Trump could shape the upcoming legislative agenda. In this case, many Republicans are already on the same page as Trump. In April, Sen. Ted Cruz (R-Tex.) accused Zuckerberg directly of a "pervasive pattern of bias" during what would become a grueling, hours-long hearing.

Conservatives have been motivated to enact legislation that targets tech companies. Months ago, Rep. Marsha Blackburn, Tenn., the leading Republican on a key subcommittee dealing with tech issues, proposed a bill that would impose additional privacy obligations on Silicon Valley. That bill has since gone dormant, but it offers evidence of some lawmakers' existing interest, even apart from Trump, to bring the tech industry down a peg.

Trump could encourage the Justice Department or the Federal Trade Commission to open up an investigation into Google.

He would not need to do so explicitly for regulators to get the message, said Luther Lowe, senior vice president of public policy at Yelp, a company that has been critical of Google's search practices in the past. Trump's rhetoric alone could simply give them political air cover to launch a probe.

"They [would] have free rein to pursue cases on the merits without fear of facing political head winds," said Lowe.

But Trump would need to be careful not to push too explicitly: The White House is not supposed to be seen directing the enforcement activities of independent agencies. This nearly got him into trouble when the Justice Department sued to block AT&T's merger with Time Warner; AT&T briefly sought White House records that could have uncovered evidence of inappropriate influence over the merger review.

A different strategy Trump could take is to encourage third parties to file lawsuits against Google, or to try to write an executive order that tackles the issue somehow.

Presidential administrations have been known to file arguments as a non-involved party in outside lawsuits, said Dickinson.

"It's not unusual for the government to weigh in on court cases in areas like, say, affirmative action, involving suits by private citizens," Dickinson said.

The executive order path is somewhat hazier. It's not clear whom in Trump's administration he would direct to act against Google, or what Trump could legally order his own officials to do, Dickinson said.

"It is a limited tool for influencing policy, but one that could be effective under certain conditions," he said.

Previously:
• A woman dared -- yes, dared! -- to question Fitbit's accuracy and almost ended up in a legal no-man's land
• Supreme Court's travel ban ruling could have big implications for Trump's Twitter account
• What happens if police officer forces you to unlock your iPhone X with your face?
• The latest NSA leak is a reminder that your bosses can see your every move
• Supreme Court ruling changes what it means to buy almost anything
• The Supreme Court's big ruling on 'patent trolls' will rock businesses everywhere
• How to protect yourself from the global ransomware attack
• The future of Internet business might rest on this obscure court case
• Your guide to choosing an unlimited data plan
• A federal court may have just added to Clinton's email woes
• The Internet may never be the same, thanks to this landmark court ruling
• His Internet was too slow. What he did when the cable company wouldn't rectify the situation
• The real reason America controls its nukes with ancient floppy disks
• What happens when a top privacy and security regulator falls for an email scam?
• The infuriating rule American Airlines won't tell you about until it's too late