A woman dared -- yes, dared! -- to question Fitbit's accuracy and almost ended up in a legal no-man's land 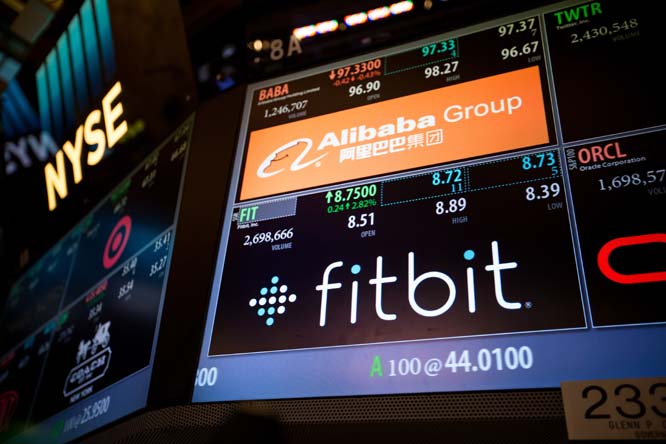 Fitbit signage is displayed on the floor of the NYSE. Michael Nagle for Bloomberg

When Kate McLellan walked out of a California Sports Chalet in 2015 with a brand-new Fitbit, she was expecting to unbox a cutting-edge heart rate tracker.

The Fitbit Charge HR, the company's marketing said, would measure McLellan's heartbeat continuously as she wore the device on her wrist, helping her "accurately track" her exercise intensity.

But McLellan discovered the device did nothing of the kind. Instead, the $150 gadget allegedly underreported her heart rate compared with readings she obtained from her usual heart monitor, a reliable but inconvenient chest-mounted strap. Her results appeared to match what dozens of other customers had found out for themselves: Fitbit's reports on her heart rate were off, in some cases, by up to 30 heartbeats per minute. Sometimes the readout was too high; other times it was too low.

"People are going to be relying on this information as the gospel truth. This could be a problem, health impact-wise," McLellan, who holds a PhD in exercise science, said. "They need to change their marketing until they can fix the technology."

McLellan is now at the center of an unfolding controversy over the accuracy of Fitbit's wearable health trackers. She and other users are raising questions in court about whether the company misled consumers and sold them a defective product. Fitbit is pushing back: It has sought to defang a class-action suit over the issue and driven some complaints, including McLellan's, toward a private venue for individual disputes known as arbitration. But it has also dragged its feet with the arbitration process, according to a federal judge, who accused Fitbit last week of litigating in "bad faith" and perpetuating the notion that private arbitration is where consumer lawsuits "go to die."

The result is a bitter legal battle not only about the limits and capabilities of new technology but about the rights of consumers to hold companies accountable - and the roadblocks seemingly thrown in front of unhappy customers that appear to be aimed at exhausting their will to fight.

Wearable heart-monitoring devices have become increasingly commonplace as the miniaturization of components, the falling cost of computing and the growing usefulness of data have combined to make portable health trackers more convenient and affordable. Wearables such as Fitbits and the Apple Watch work by measuring the amount of light emitted by built-in LEDs that bounces off a wearer's artery and back into the device, where software then calculates the user's heartbeats per minute.

Users should not expect medical-grade accuracy from these consumer gadgets, experts say, but they ought to be reliable enough for most everyday movements and activities. "For resting heart rate, it's pretty darn good, and for moderate exercise," said Eric Topol, a cardiologist and professor at the Scripps Research Institute. "But it could well be that if you're doing very intensive interval training it's not accurate in the signal detection."

McLellan said she knew not to demand scientific quality from her Charge HR, but after multiple calls to Fitbit's customer support, not even the company's staff could get the device working as she expected. So she took legal action.

"I don't need it to be 100 percent valid," she said. "I'm not going to be comparing it in a lab against the gold standard. But I needed it to be reliable."

Outside studies by the Cleveland Clinic, the University of Leeds and other institutions, the complaint said, had also observed inaccuracies in Fitbit's detection technology.

McLellan and her lawyers first brought a class-action suit against Fitbit more than two years ago. The company persuaded court officials last month that only those who had complied with the company's fine print could participate in the suit. There is only one way for Fitbit customers to opt out of the arbitration track and become eligible for the class action: by writing to a corporate email address within the first 30 days of accepting the company's terms of service, a step users go through when setting up their devices. Those who missed that legalese - or who didn't understand it - must process their complaints through arbitration, as Fitbit lays out in its terms, Judge James Donato of the U.S. District Court for the Northern District of California, said, according to court documents.

These kinds of arbitration clauses are by now a ubiquitous feature of America's commercial landscape. Banks, private schools, companies and organizations nationwide have taken to slipping arbitration agreements into their consumer contracts as a way to resolve customer disputes quickly and without the lawyers' fees that can accompany big class actions. But critics of arbitration say the practice puts an unnecessary burden on consumers to make their case and pits well-resourced companies against the relatively weak.

"When they force cases into one-on-one arbitration, most people go away," said Lauren Saunders, associate director of the National Consumer Law Center. "And that's what companies count on."

Unlike most people, McLelland resolved to put the company's arbitration policy to the test. What she encountered next was a thicket of legal arguments by Fitbit that Donato would later conclude were "intended to shut her out of arbitration," even after she had already been denied access to the class-action suit.

Despite first arguing that McLelland's complaint could only be resolved through arbitration, Fitbit told the judge it didn't expect to go through with the arbitration after all. It offered McLelland a settlement of roughly $1,000 plus legal fees, and told the court it made no sense to go to arbitration over what amounted to a customer refund.

"The Court ought to understand that a claim that is $162 - an individual claim - is not one that any rational litigant would litigate," Fitbit's lawyers said, according to court transcripts. The trivial sum, Fitbit said, also explained why it did not pay its arbitration fees on time and instead told McLellan it considered the complaint "closed," according to court documents.

Some evidence suggests arbitration can benefit consumers. The CFPB's own studies have shown that when consumers win at arbitration they receive, on average, $5,389 - far more than the average $32 that class-action victors receive. And experts say companies in arbitration are not allowed to use many of the legal tricks they otherwise might to wriggle out of a complaint in court.

Still, McLellan's case underscores why some critics view arbitration clauses with suspicion. Even as Fitbit sought the benefits of invoking arbitration - closing the door to class action for all but 200 complainants who'd opted out - it argued against seeing the arbitration through to its natural conclusion, which could have led to an unfavorable decision for the company.

Trying to have it both ways rarely works out for companies, according to Andrew Pincus, who represented AT&T in the 2013 Supreme Court case on arbitration. "Companies deciding whether or not to adopt an arbitration system for resolving disputes have to realize that there are benefits, but there are also things that companies give up," Pincus said.

Donato concluded last week that McLellan's arbitration process can continue after Fitbit ultimately paid the processing fees it owed. But he minced no words as he excoriated Fitbit's "abuse of the judicial process" that he said created the situation in the first place.

"It's no surprise that many people, including judges, are skeptical about arbitration agreements in light of situations like this one," he wrote. "Fitbit's conduct undermines the public's confidence in getting a fair shake when arbitration is compelled."

Previously:
• Supreme Court's travel ban ruling could have big implications for Trump's Twitter account
• What happens if police officer forces you to unlock your iPhone X with your face?
• The latest NSA leak is a reminder that your bosses can see your every move
• Supreme Court ruling changes what it means to buy almost anything
• The Supreme Court's big ruling on 'patent trolls' will rock businesses everywhere
• How to protect yourself from the global ransomware attack
• The future of Internet business might rest on this obscure court case
• Your guide to choosing an unlimited data plan
• A federal court may have just added to Clinton's email woes
• The Internet may never be the same, thanks to this landmark court ruling
• His Internet was too slow. What he did when the cable company wouldn't rectify the situation
• The real reason America controls its nukes with ancient floppy disks
• What happens when a top privacy and security regulator falls for an email scam?
• The infuriating rule American Airlines won't tell you about until it's too late