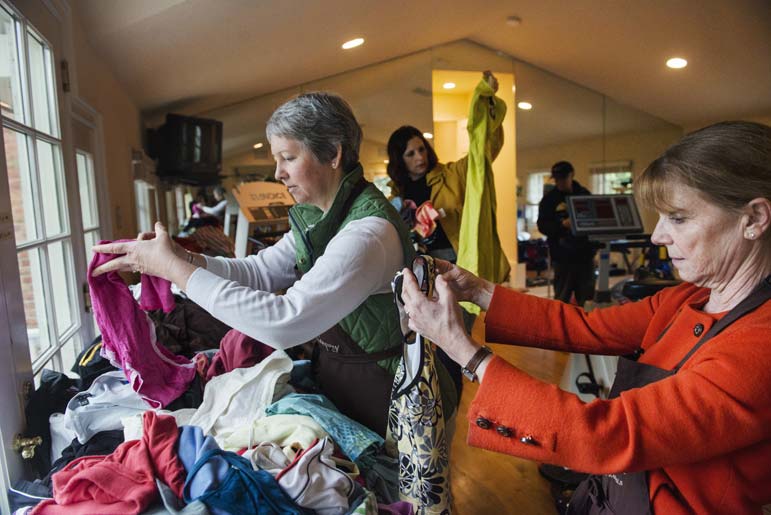 WASHINGTON - You never forget the one that got away.

The art nouveau-era brooch shaped like a dragonfly had landed gracefully atop a mound of jewelry inside a display case. I could see its appealing $10 price tag. So could all the other treasure hunters at the estate sale, mashed shoulder to shoulder like strap hangers at rush hour. Before I could get the attention of the woman in charge of the jewelry case, another shopper elbowed me out of the way and netted the bug. I still mourn.

Wedding photographer Kate Headley wasn't about to let the same thing happen to her at an estate sale here this summer. Already 15th in a line that snaked around the front lawn of a French-style manor, Headley, 36, had pored over online photos. She was there to score a paint-splattered stool that had belonged to the former artist-in-residence, Gini Alter (no relation).

"Estate sales are like time capsules; you never know what you're going to find," said Headley, who was wearing a $4 straw hat she found at another sale. "I once looked under a bed and found a tanning machine." As soon as the doors opened, she made a beeline to the back yard and nabbed her prize.

Estate sales are held to dispose of the bulk of a person's belongings, usually but not always after death. They attract a wide assortment of shoppers: dealers hoping to turn a profit, couples looking to furnish starter homes, amateur collectors, looky-loos who just want to explore mansions in wealthy enclaves or homes of the rich and/or famous. And they offer an even wider assortment of prizes -- first-edition books, costume jewelry, patio furniture, antique Persian rugs, and yes, even tanning beds. No matter what you're into, chances are you'll be able to find it at an estate sale.

If you're not a regular, the process -- including finding one and navigating it once inside -- can be confounding. But with a bit of preparation and a few simple tricks of the trade, you can elbow it out with the best of them.

"The game has changed quite a bit," said Mike Weichbrod, 73, whose suburban home offers ample space for the antique and vintage tools he collects. In the past, he looked in The Washington Post's classified section to find sales. "Now there are a number of ways to gain entry."

One method is to subscribe to EstateSales.net, a daily email and app service available nationwide that locates sales by state and/or ZIP code. Besides addresses and start times, most listings include photos of available items.

Other options include EstateSales.org and Yardsalesearch.com. Individual listings will also specify what time either numbers will be handed out or a sign-up sheet will be posted, usually near the front door, to determine who gets in first.

"Make sure you go" before you go, said Robbin Mullin, a longtime jewelry dealer at Sunday's Georgetown flea market who always seems to be first in line at every sale. Just because a house has a bathroom, she warns, doesn't mean it's open to the public.

It's also a good idea to charge your phone in case you want to look up, say, how much Royal Doulton figurines are selling for on eBay. I've seen a husband and wife set up camp in front of a bookcase, laptops open, shamelessly checking used-book prices on Amazon.

If you're into vintage and designer clothing, and the least bit modest, wear something fitted for trying on clothes (I go with leggings and a tank). The bedrooms at many sales look like the backroom at Loehmann's, with heaps of dresses off hangers, piles of sweaters on the carpet and women in various stages of undress.

Consider bringing a list. David Davenport, 27, and Paul Wells, 29, who were at the sale that Headley attended, both work in health-care fields and had just moved into a one-bedroom condo together. "We need everything," said Davenport, whose small notebook contained a prioritized shopping list broken down into categories such as kitchen, furniture and decor. At the top of the page, he had written "bring cash, a tape measure, and fabric samples and paint chips." All good ideas.

• Go where, and when, others don't

You've shown up at the correct address, got your number and stood around trading stories with the other people in line. The door opens. Now what?

"Don't be afraid to get down and dirty," said Carrie Cohen, a 40-something weekend warrior. "Go to the basement, check in the closets, check in the pockets of all the jackets." Cohen did just that at the March estate sale of the late astronaut and senator John Glenn where hundreds of shoppers waited in line to enter a room designated for memorabilia. Cohen instead wandered down to the basement and, in a closet filled with crumpled newspapers, unearthed Glenn's flight bag along with his personalized Senate attache case. She declined to say what she paid for the items (or what she plans to do with them) but shares that she recently spent some time scrounging through the attic of a house on 16th Street NW where, for $5, she bought a 48-star American Flag. Its value, she thinks, is more than $1,000.

Fiction writer Bob Girardi has a similar strategy. "I nose around the bottom and work my way up," he said. "The basement is where they put the old stuff that they didn't want to throw away," such as a midcentury chair he recently found. Girardi, whose father was in the CIA, said he can walk into a home and tell instantly if it belonged to a CIA family: "Camel saddles from North Africa and spy novels on the bookshelves are giveaways."

In one house he came across a sort of who's who in the CIA published, he said, by a front group for the KGB during the Cold War, which he bought even though his family's name wasn't in the book. His greatest discovery? "I once found a first edition of Joseph Conrad's "Lord Jim" for $1," he said. "I traded it for a Honda CR-V when my car broke down."

Artist Patty Marcus, 57, employs a different tactic. "I look for the area with less people and work around from there," said Marcus, who moves fast. "If you see something you like, pick it up and carry it with you or you'll never see it again."

Another strategy is to hit a sale on its final day, when most things are 50 percent off. (Some companies will lower prices by 25 percent on the second day.) The last day of a sale is also a great time to negotiate for larger pieces of furniture. "If I have a $100 offer for a piano and it's going to cost me $250 to have it moved after the sale, I'm going to take that offer," said Carol Walser who, with business partner Lyn Witt, runs the estate sale company Market House. "My goal is to get it out of the house and make money for our clients."

Do be on your best behavior. "It amazes me how disrespectful some shoppers can be when they're coming into someone else's home. They're like wrecking balls, driving on lawns and going in rooms that are marked 'Do Not Enter,' " Walser said. "I once saw a man and a woman rolling around on the front lawn, fighting over a Hummel figurine." The woman, she added, won.

Do bargain. "We will negotiate, absolutely," Walser said. But it pays to be nice; Girardi uses what he calls "the dimple discount" when he makes an offer.

Don't shop out of someone else's hold pile. Typically, the hold area is by the register, and items that are already spoken for are marked with and sometimes barricaded by masking tape.

Don't ask too many questions. However much you want to know the provenance of a piece of jewelry or antique dresser, "you shouldn't exercise your nosiness," warned Stephanie D'Orazio Rigaux, who runs DC Estates. Some of her clients are former spies, famous or have simply hit hard times, she said. "There are lots of reasons why people are selling everything they own."

• Finally, have a good time

"Come with an open mind, bring an empty shopping bag or two, some cash or a checkbook, and enjoy the experience," Walser said. "We welcome first-timers. We say, 'Come on in. This is fun.' "