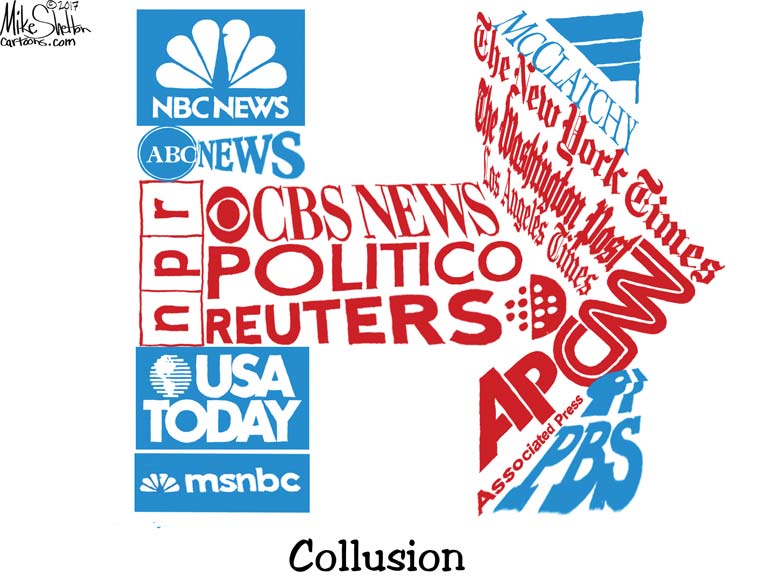 The Boston Globe successfully organized a campaign to get nearly 350 newspapers, large and small, to publish an editorial on Aug. 16 on "the dangers of the administration's assault on the press." They laughably claimed: "This whole project is not anti-Trump. It's really pro-press."

This was The Globe's summation: "The greatness of America is dependent on the role of a free press to speak the truth to the powerful. To label the press 'the enemy of the people' is as un-American as it is dangerous to the civic compact we have shared for more than two centuries."

It's easy (and obvious) for any newspaper to write purple prose about the glories of the First Amendment and the crucial role the press plays in keeping governments accountable. The rebuttal is just as easy: Many liberal media outlets stink at holding liberal politicians accountable. Instead, they gush over them and defend them at every turn, refusing to advance stories that could damage their reputations. Let's do a quick review of The Globe "holding liberals accountable."

— When the movie "Chappaquiddick" came out in April, Globe film critic Ty Burr touted Ted Kennedy's "endless accomplishments" in the Senate and added that the Kennedys "remain royalty in a country of grudging commoners." Was the movie true? The critic concluded, "I'll never know, and neither will you."

— In January, The Globe topped a Sunday paper with a headline oozing over former President Barack Obama: "Gone but Still Growing on Us." It began: "His poll numbers look great, his Twitter posts are often among the most read in the world, and with every utterance, his impassioned base of supporters reacts with a fervor more typical for celebrities than former civil servants. Meet Barack Obama." Can you smell them holding presidents accountable?

— Last September, The Globe's front page carried a story implausibly promoting ultraliberal Sen. Elizabeth Warren as a Bible-thumping Christian. "Warren is well known for her acrid take on Wall Street" and Donald Trump, "But religious leaders who have known her since her first run for public office say her Christian faith is a constant, if quiet, presence in her life, that it is deep and authentic, and informs her work as a senator." That echoes the way liberals promoted Hillary Clinton and skips over their hardcore defense of abortion on demand.

By contrast, The Globe's ardor against Trump caused it to create literal "fake news." On April 9, 2016, it published an entirely fake front page dated April 9, 2017, that imagines the nightmare of a President Trump.


A fake story was headlined "U.S. Soldiers Refuse Orders to Kill ISIS Families." The orders never came. In another fake story, Trump offended the Chinese first lady by naming his new dog after her. Trump didn't get a new dog. Another predicted, "Markets Sink as Trade War Looms" and had a chart showing the Dow Jones at 9,912. On the actual date in 2017, it was over 20,000.

The Globe describes this anti-Trump jihad as "promoting the freedom of the press, in light of President Trump's frequent attacks on the media." It chooses to ignore that the media's documented network evening-news coverage of the Trump campaign in 2016 was over 90 percent negative.

It chooses to ignore that this 90 percent negative coverage has been the norm every single month since then. His attacks on them may be frequent, but theirs on him are almost universal. There are many things the press ignores these days, including their rampant hypocrisy.