Libertarians wrestle with the alt-right 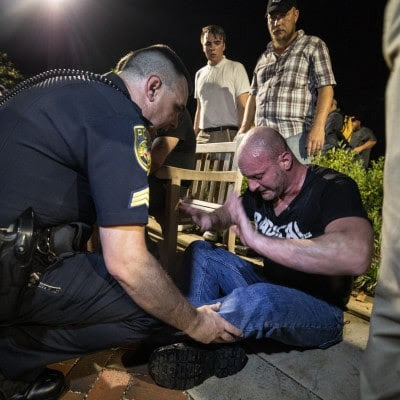 White nationalist Chris Cantwell has had quite the week after being featured prominently in an HBO news program on the march in Charlottesville, Virginia, last weekend. Photo by Evelyn Hockstein for The Washington Post

Christopher Cantwell, the self-described anti-Semite and alt-right activist who starred in a viral Vice News documentary about the deadly protests in Charlottesville, Virginia, is now facing three charges based on his conduct.

Unlike some of the other marchers, Cantwell was no stranger to confrontations with authority. In New Hampshire, his sudden fame startled libertarians who had known Cantwell as a busy, talkative but increasingly extreme anti-government activist. In 2012, he arrived in the state as a vocal support of Ron Paul's 2012 presidential campaign, and as a critic of the police - a hot issue in Keene, a college town in western New Hampshire with a robust libertarian population. At some point in the Obama years, he had changed.

"Until the last year or two of his life, he'd been a libertarian activist with no known racist streak," wrote Ian Freeman, a radio host and commentator in the "Free Keene" movement, in a post last week. "A couple of years ago, he began down this road to his current skinhead-racist form and once that happened, we had to dump him as a co-host of my radio show, Free Talk Live. As libertarians, we believe in the individual and don't see people as groups based on color, gender, or religion. Chris now only sees the group rather than the individual. He's one of the few people who has turned away from the libertarian message after having embraced it."

But in Cantwell's own words, he had come to racism and anti-Semitism through libertarianism - not by abandoning it.

Cantwell's story is one of several that have made libertarians ask fresh questions about the turns that their movement took in the Obama years, as Paul's two Republican bids for president consolidated everyone from anti-government "voluntaryists" to racist conspiracy theorists into one roiling campaign.

"I've been concerned about some libertarians trending alt-right, because these hard alt-right proto-fascists and neo-Nazis have been trolling libertarians for years," said the libertarian writer Jeffrey Tucker, who has written extensively about the racist threat to the movement. "They're doing to libertarianism what they did to Pepe the frog, or Taylor Swift - to co-opt it. They know that no normal American is going to rally around the Nazi flag, so they're taking ours." But as Cantwell himself pointed out, a debate about racism - and racism's political utility - had been taking place among libertarians for decades. Ron Paul first ran for president in 1988, drawing media attention but bringing his Libertarian Party less than 1 percent of the vote. In the wake of that defeat, the libertarian thinker Murray Rothbard argued that the movement needed to take a page from the campaigns of former Ku Klux Klan leader David Duke.

Libertarians, stuck in a losing effort to win "yuppies," needed to realize the potency of an appeal to white working-class voters, one that explained how shrinking the state would mean fewer benefits devolved to people not like them.

"The proper strategy of libertarians and paleos is a strategy of 'right-wing populism,' that is: to expose and denounce this unholy alliance, and to call for getting this preppie underclass-liberal media alliance off the backs of the rest of us: the middle and working classes," Rothbard wrote.

In an essay published at his personal website last week, Cantwell cited Rothbard as one of the thinkers who had moved him from generic anti-state activism, toward racism.

"What I realized in the course of my inquiries, is that the people everyone called racists weren't claiming that race was a reliable way of judging individuals. They were only observing demographic trends, and hate was not the focus of their efforts. They were trying to reduce the amount of conflict and violence in their society, and they figured out that discrimination based on ethnic categories was an efficient method of accomplishing this goal.

"That seemed to coincide well with my libertarianism. Libertarians also want to reduce conflict over scarce resources. In libertarian philosophy, nobody ought to be compelled to associate with anyone else. People should be free to exercise complete control over their own person and property. If blacks are committing crimes, or Jews are spreading communism, discriminating against them is the right of any property owner."

Mainstream libertarians were worried about the spread of ideas like that. Paul's campaigns, which some cosmopolitan libertarians viewed skeptically, took their philosophy to new heights of political support. It also, indisputably, won the support of some white supremacists. In 2007, as Paul was rising in polls for what had been a quixotic presidential bid, he appeared as a guest speaker for the Robert Taft Club, led by Richard Spencer - the same Richard Spencer who, after the 2008 election, coined the term "alt-right."

This year, when Spencer was invited to talk to some attendees of the International Students for Liberty conference, Jeffrey Tucker confronted him in an exchange filmed from several angles and shared by alt-right activists who thought that Spencer got the better of it. "I used to read your articles," Spencer said, mockingly, while Tucker accused him of trying to troll the conference.

The confrontation had been a long time coming. In 2014, Tucker had written an essay against what he called "libertarian brutalism," defining it as an anti-liberal tendency that grew out of a perversion of libertarian principles.

"The brutalists are technically correct that liberty also protects the right to be a complete jerk and the right to hate, but such impulses do not flow from the long history of the liberal idea," he wrote. "As regards race and sex, for example, the liberation of women and minority populations from arbitrary rule has been a great achievement of this tradition. To continue to assert the right to turn back the clock in your private and commercial life gives an impression of the ideology that is uprooted from this history, as if these victories for human dignity have nothing whatever to do with the ideological needs of today."

One of Tucker's critics, at the time, was Christopher Cantwell. "What we 'brutalists' are saying is, egalitarianism is not the means or end of libertarianism, and saying otherwise in hopes of attracting Democrats into our ranks is illusory," he wrote. "When you repeat statist race propaganda, do you grow our ranks? No. You simply distract from the point that race is irrelevant."

Three years later, having substantially changed his views on race, Cantwell would turn himself in to police after bragging about his actions at a rally organized by racists.