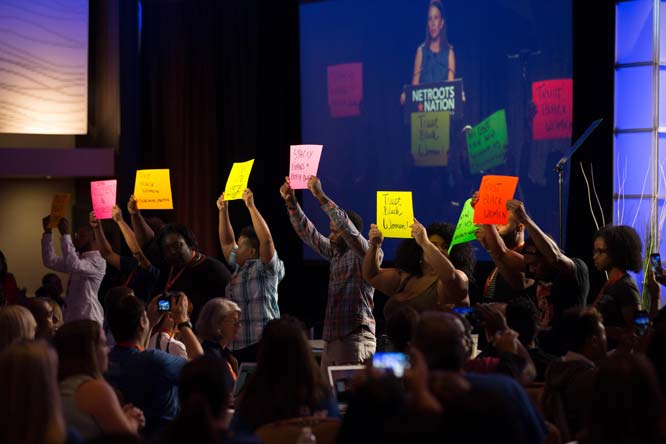 ATLANTA - Rep. Stacey Evans, D-Ga., a legislator running to be the Democratic nominee for governor of Georgia, spent her entire 10-minute speech at the annual Netroots Nation Conference talking over protesters who chanted "trust black women!" and compared her to Secretary of Education Betsy DeVos.

The protests put racial tensions progressive activists on display, with protesters accusing white progressives and Democrats of holding Rep. Stacey Abrams, D-Ga., the first black female leader of her party in the legislature, to higher standards than the white and moderate Evans.

"An interruption is not necessarily promoting one person over another," said Anoa Changa, a protester who held court outside the convention hall after Evans left the stage. "How do you have someone onstage with groups like the [National Education Association] that are fighting the issues that she supports? Come on!"

Abrams, first elected in 2006, had been a star at previous Netroots Nations conventions, and spent two days working the convention with a message about how massive voter registration could activate black voters.

"We can change the face of Georgia, forever," she told supporters at a Thursday night fundraiser near the convention. Trump voters, she suggested, could "come along for the ride."

Evans, first elected in 2010, has talked more about winning back white working class voters who abandoned the party in 2016, and in Georgia for decades before that. The focus of that effort was her 2011 vote against cuts to the state's HOPE scholarship - cuts that Abrams supported by explaining that they were the only way to save the scholarship from a complete gutting at the hands of a GOP majority enhanced after the 2010 elections.

At Netroots, Evans repeatedly attempted to talk about HOPE, barely drowning out the chants of protesters as they turned their back on her and waved signs reading "Trust Black Women" and "Evans = DeVos." A handout, with no markings indicating who had produced it, accused Evans of taking DeVos-like positions on key education issues. "Voted FOR the bill to create the private school voucher program" it read; "voted FOR constitutional amendment to allow state charter schools."

What also animated the protests was a sense that Abrams was being held to a higher standard than Evans - part of a persistent media narrative that treated white candidates as bridge-builders and black candidates as focused only on the base.

In a profile of Evans, Washington Examiner wrote this year that the Democrat told "an important economic story that appeals to the blue-collar white voters that Georgia Democrats lost to Donald Trump," suggesting that Abrams did not.

"The question is, will that story work?" asked Zito. "Or do Democrats merely need to turn out more of their urban and ethnic base?"

At Netroots, some protesters who declined to give their names said that they'd been angered by recent coverage of Sen. Kamala Harris, D-Calif., and Sen. Cory Booker, D-N.J., saying that the early, purity-testing coverage of their records was being mirrored by coverage of Abrams and the HOPE scholarship program. Evans made no move to remove the protesters, apart from asking them to let her speak. After she finished, Angel Kyodo Williams, the emcee of the Saturday session, said that both Evans and the protesters had behaved appropriately.

The next speaker, Maryland gubernatorial candidate Ben Jealous, briefly addressed the protests by praising Abrams's work as an organizer.

"I heard somebody yelling, 'Trust black women,' and I want to say, I trust Stacey Abrams," said Jealous.