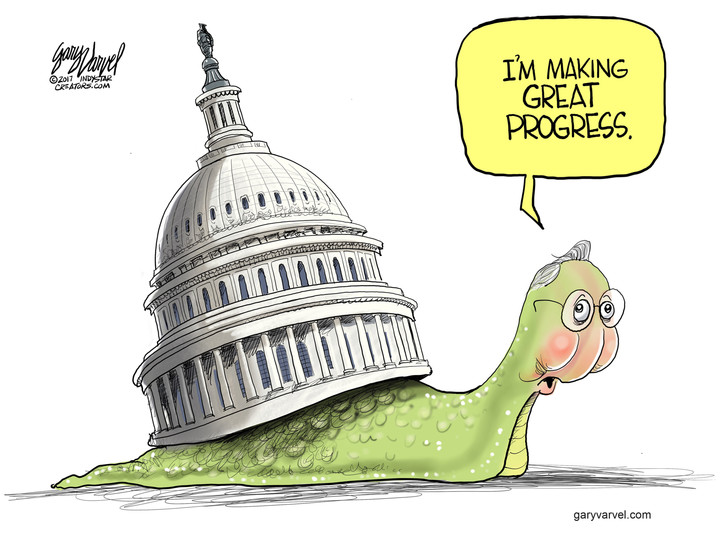 President Donald Trump attacks Senate Majority Leader Mitch McConnell, R-Ky. The House and Senate have yet to agree to a budget, putting in play a government shutdown. None of the big items on which Republicans ran -health care, taxes, pulling out of the Iran deal, building a wall - have been accomplished. It's no wonder Republicans in the House and Senate are grossly unpopular:

"According to a new CNN poll conducted by SSRS, with nearly 7 in 10 (68 percent) judging the Republican Congress a failure so far after last month's repeal and replace plan died in the Senate. Approval of the current Republican leaders in Congress has dropped from 39 percent in January to just 24 percent now. Seven in 10 say they disapprove of Republican leaders in the legislature. More broadly, only about a quarter of all Americans (24 percent) judge the Republican Congress a success so far. President Trump gets the approval of 38 percent of Americans in the CNN poll."

Even Republicans are not pleased with Republicans. ("Republicans themselves are evenly split 44 percent to 44 percent on whether the GOP-led Congress has been a success or failure so far.") Democrats aren't that much more popular (34 percent approve), but as the minority party they have the most to gain in "throw the bums out" midterm elections.

Moreover, as Democrats work hard to keep their base engaged, Republicans may have trouble turning out their side. ("Views among Republicans and Republican-leaning independents of their party's congressional leadership has plummeted over the last eight months, falling from 75 percent approval in January to just 39 percent now. Democrats' and Democratic-leaning independents' views of their party's leadership remains basically unchanged at 50 percent today.") Moreover, a plurality (38 percent) of Americans blame Republicans in Congress specifically for not getting things done.

Unfortunately for him, popular support for repealing and replacing Obamacare has lagged:

"Moving forward, a majority of all Americans (56 percent) says Republicans should work with Democrats to make changes to current health care policy. The rest are divided: One in five say the GOP should both stop trying to repeal Obamacare completely (21 percent) and the same share say Republicans should keep trying to repeal it anyway (21 percent). Republicans themselves are split on this question: 45 percent say GOP leaders should continue trying to repeal Obamacare on their own, 42 percent that they should work with Democrats to make changes. And finally, Democrats are benefiting from the gender divide. ("Six in 10 women back Democrats for Congress in 2018, while men back Republicans by a slim 5-point margin.")

Looking at this data Trump, might benefit from dumping Republicans and looking to make deals with Democrats on infrastructure and repairing Obamacare. Trump has always been about his own wins, so why should he care which congressional party helps deliver what he wants? By the same token, if Democrats could strike a deal with Trump on, say, infrastructure, they'd undercut the rationale for GOP majorities in the House and Senate.

That strategy is fraught with peril for both sides, however.

Democrats want no part of items Trump might demand (e.g., "the wall") as part of a bipartisan deal, and they would just as soon see Trump fail, dragging down the GOP House and Senate with him. Meanwhile, Trump needs to keep the support of Republicans, who are the only ones that can confirm conservative judges, pass a giant tax cut and, most important, protect him from not only removal but also more serious inquiries that would explore his conflicts of interest and receipt of foreign money.

Trump might revel in sticking a knife in the back of the party he inhabited to reach the White House, but as a practical matter, a president as weak as this one, with brewing legal problems and waning support from the GOP base, cannot afford to be friendless.

In short, voters don't like Republicans in Congress, who these days don't much like Trump, who doesn't like Republicans but cannot afford to lose GOP majorities. Democrats would like nothing better than to see Trump's attacks and GOP inertia depress the GOP midterm electorate, but not if it means giving Trump wins he so desperately needs. In sum, no one likes much of anyone these days but neither do they want to risk blowing up the partisan status quo.

That means we should be prepared for plenty of sniping and very little legislation.