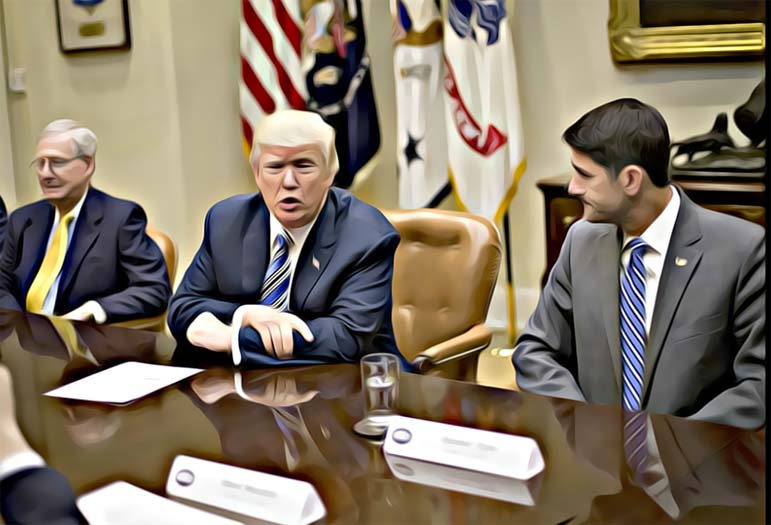 While President Trump spends the next two weeks away from the White House, scores of workers will undertake the next steps in a long-planned renovation of the West Wing.

White House staffers have been relocated while stairs and leaks are repaired, electrical systems upgraded, walls repainted, drapes cleaned and a modernized system of heating and air conditioning is installed.

The massive 24/7 repair work area is an ideal metaphor for the troubled Trump administration rolling toward its eighth month: It has a new chief of staff, a purged National Security team, an empty director of communications slot and a brand-new work flow chart imposed by retired Gen. John Kelly.

(Trump clearly favors working with generals who are, in effect, military chief executives. We'll see if the impetuous elected chief executive feels the same after a couple of months of Marine Corps discipline.)

However, one serious problem remains unaddressed - the deteriorating relations between the Republican president and the Republican Congress, something that reared its head during the prolonged House struggle to repeal Obamacare. Without repair, this poor relationship threatens to sink GOP chances of holding its congressional majorities in next year's midterm elections.


If they don't start working better together in the remaining 65 weeks to get at least some major items passed and signed, the loss of GOP control would doom their chances of getting anything through another gridlocked Capitol leading up to 2020.

"This is a critical time for us as Republicans," admitted RNC Chair Ronna McDaniel, "because we do have the Senate and the House and the White House ... Now it's our time to show....that we can govern when we're given the majority."

Donald Trump might be described as a Republican of convenience, an outsider not bred of the ideological stock that wins and maintains D.C. power. His populist pragmatism appealed to millions of non-Beltway voters angry at both parties for years of unkept promises. He feels his electoral majority pulled GOP members along.

So, the billionaire has no trouble lashing out at his own party's members, even though he will need them next month and beyond for tax reform, debt ceiling and trade votes, among others.

Trump grumbled about Congress's prolonged inability to pass healthcare reforms and new Russian economic sanctions restricting his ability to change them without approval. He said the bill reduces relations with Moscow to "an all-time and very dangerous low," adding, "You can thank Congress, the same people that can't even give us" healthcare.

Tellingly, GOP House and Senate leadership had no comment. Turns out, most elected congressional Republicans got more votes than Trump last November.

And South Carolina Republican Sen. Tim Scott replied: "We work for the American people. We don't work for the president."

Blunt words coming from a caucus that for years boasted to voters and donors how much more it could accomplish if only the GOP held the White House. But now Trump's approval has slid into the 30s as numerous investigations of the administration proceed.

Trump's party is also moving now to block his ability to fire special counsel Robert Mueller. It also rejected Trump's urging to resurrect once more a bid to repeal Obamacare and his plaintive complaint over lack of congressional protection, as if Congress wasn't a separate branch of government.

But - wait for it - other Republicans have other ideas, mainly involving broader reforms. A similar plan foundered over party fractures during the administration of George W. Bush. Not only did the GOP lose both houses of Congress in 2006. It proceeded to lose the White House two years later in 2008.