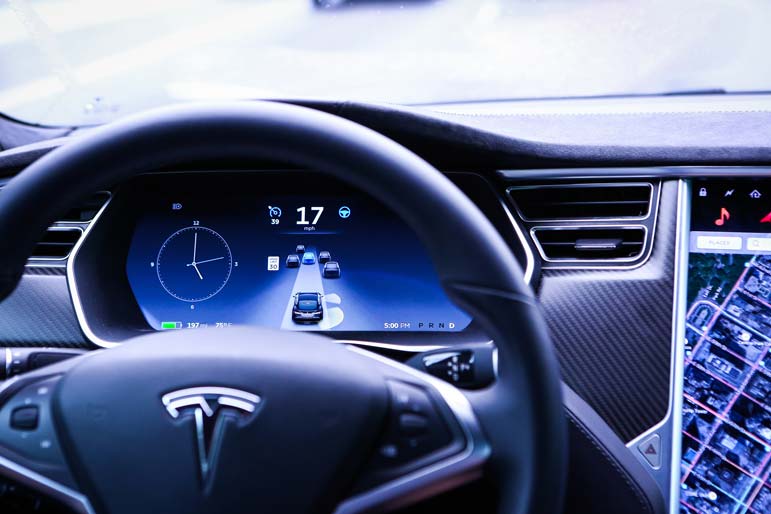 An instrument panel illustrates the road ahead using autopilot technology in a Tesla car. Bloomberg photo by Christopher Goodney

Tesla's new electric car has debuted to rave reviews; one writer called it "the most important car in the world right now." In general, the commentary on the Model 3 has suggested the product delivers on its promise. Solar panels are falling exponentially in price, and there are periodic bursts of good news on the quest to develop a more durable and cost-effective battery. All of these developments would boost the prospects of green energy.

You might think the U.S. productivity slowdown is finally ending, but unfortunately the news isn't as good as it first seems. Instead, we are specializing in a new and sadly necessary practice of what I call "defensive innovation."

Defensive innovation is when you create a new product or capability to protect yourself against an impending disaster, such as the worst scenarios for climate change. It's important, of course, to practice defensive innovation, but don't confuse it with progress. The defense only stops your living standards from falling.

The military response to foreign threats is another example of defensive innovation. The risk and potential costs of cyberwarfare are escalating rapidly, and terrorist threats seem worse than they did in the 1980s or 1990s. The best case scenario is that we come up with better means of tracking and hindering cyber and terrorist attacks -- by cutting off funding or by tracing and halting potential perpetrators. Those too will be defensive innovations, aimed mostly at preserving capabilities we already have.

The American military might someday develop better protection against the new threat of North Korean intercontinental ballistic missiles, which might be capable of delivering nuclear weapons to U.S. cities, possibly even New York and Washington. Imagine something akin to Israel's "Iron Dome," but protecting a broader geographic area against a greater diversity of weapons. That would be an impressive achievement, but would be an essentially defensive innovation.

Sometimes defensive innovations are mixed in with positive advances. The aging American population faces a potential crisis of senility, dementia and Alzheimer's disease. A very large number of nonfunctioning elderly people would impose a significant burden on the economy and on caretakers.

If medical science miraculously eliminated those cognitive problems, that would be a very real gain in well-being and happiness for America's elderly. But some of the gain would be defensive in nature, preventing millions of Americans from facing the burdens of caring for such individuals.

Similarly, the electric car is not entirely a defensive innovation. It may be zippier and fun to drive, with a new driver interface. Still, the truly exciting element of the electric car seems to be its potential for limiting carbon emissions and other forms of air pollution.

Driverless cars will save lives and ease commutes. But again they are a defensive product, as otherwise traffic congestion will be much worse.

The need for defensive innovation suggests that many observers overrate the true pace of technological progress. Too many exciting headlines are about cleaning up previous messes, and often those are messes we have made ourselves. Repair work is necessary, but it's preventing a step backward rather than paving the way for higher living standards on a sustainable basis.

Note that in the earlier stages of economic growth, there is usually less defensive innovation, if only because there is less to defend. There are fewer resources to protect, and the pollution problems of poorer societies are either smaller-scale or simply intractable, short of having more prosperity.

So when these poorer societies innovate, usually those are progressive developments. The relative paucity of defensive innovation does mean higher risk, of course, and that is a human cost. But if anything we are underestimating the progress those societies are making. They are accepting higher risks to move ahead more rapidly.

These days, too many of America's defensive innovations aren't even about protecting actual social values at all. Homeowners seem to have gotten better at limiting nearby real estate developments, and defenders of the status quo have honed their skills at policy gridlock. More and more of the federal budget is frozen into place to pay for entitlements. That stultification of the role of government is what happens when you get too good at defensive innovation.

So don't be too easily impressed by even the truest and most reliable stories of tech advances. Instead, ask yourself whether we're playing offense or defense.