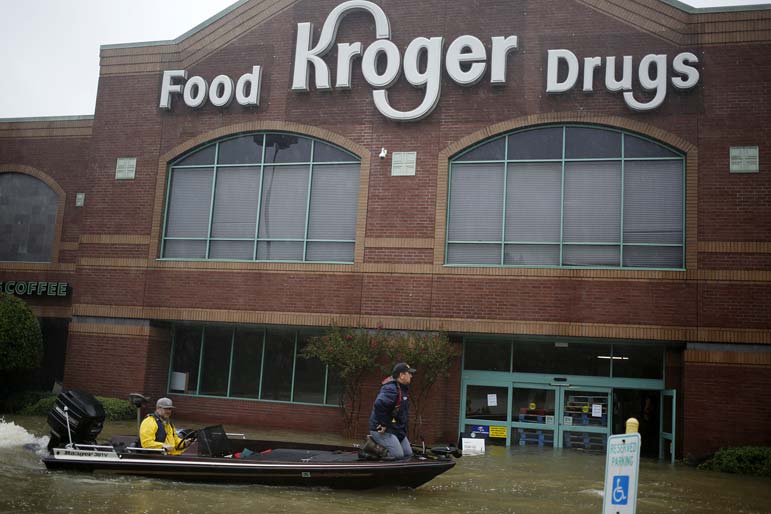 Twitter erupted with fury Tuesday after a television reporter tweeted from Houston that he had informed police about looting he observed at a grocery store while covering Hurricane Harvey.

Angry tweets accused the reporter, Tom Llamas of ABC News, of "ratting out" desperate, starving people. Llamas later said that he had been misunderstood.

Were the reporter's critics right? Should we conclude that people taking food from an empty store during an emergency are not committing a crime? That's exactly what we should conclude - they are not lawbreakers - but it's important that we understand exactly why.

Let's start by considering our own instincts. If I was trapped and my family was starving, I would grab the food; I suspect most readers would too. Already our instincts tell us, then, that the moral situation in which we find ourselves is different when a disaster has struck. I believe, very deeply, in the importance of strong property rules.

In an emergency, however, we should interpret the rules differently.

The problem is familiar to law students. It arises in courses on torts, contracts and (of course) criminal law. A well-known example in the Model Penal Code posits a hiker who, trapped by a blizzard, breaks into a cabin and eats the food to survive. The hiker has taken both food and shelter without the permission of the owner.

By choosing to violate a property rule rather than starve to death or die of exposure, the hiker has selected the lesser of two evils. This is one form of the defense known as "necessity," and is generally considered to mean that there is no crime.

But let's be clear about why this is so. In the Model Penal Code example, there's a life-threatening emergency but there's also something else. When the hiker stumbles upon the cabin, it's empty.

Thus we might say formally that high transaction costs make it impossible for the hiker to negotiate with the owner for the food and shelter that he needs. The same then would be true of the people left hungry in Harvey's flooding. Key to our conclusion that they're not looters is that the stores from which they are taking food are unattended - empty.

So now imagine a different case: When the hungry people arrive at the flooded supermarket looking for food, the owner is standing in their path. He is an ornery sort. He listens to their pleas but says no. They demand food anyway. He brandishes a shotgun and says that he will defend his property. If they overpower him and take the food anyway, is the case the same?

Plainly it isn't. For one thing, they have added assault to the crimes with which they might be charged. Pilfering food when you're hungry is one thing; injuring someone to get it is another. In other words, the defense of necessity weakens as the crime becomes more serious.

But if this is so, then suppose a scenario where the owner isn't present (meaning there can be no negotiations), but he later discovers the looted food store, and finds out who took his goods. No crime has been committed.

Does that mean that no tort has been committed? If we suppose that there would have been negotiations had the owner been present, then a court could indeed require that those who took the food must pay a reasonable price later on. If we don't believe this, then it's not clear why the hungry shouldn't be permitted to fight their way past the ornery owner and take the food over his objections.

(And before you answer that the hungry should indeed be able to fight their way past the store owner, imagine that refugees from the storm show up at your door and demand to share your house, under the rule of necessity. If you say no, should it be legal for them to fight their way into your house and take it over? Shelter is a necessity too.)

Another way to put the point is that although the law allows property rules to be violated in cases of emergency, rules protecting the individual are treated differently. Moreover, although charity is a moral obligation it is rarely a legal obligation. We should love our neighbors. We should share with them to the extent that we are able. But with rare exception the law will not force us to share, even when sharing is the right thing to do.

The distinction is far from abstract. After Harvey, police have arrested a number of residents for armed robbery - that is, taking what they need (or want) by force. This is as it should be. But the police have also promised to arrest "looters," and reportedly have already put some behind bars. If the supposed looters were simply trying to feed their families in an emergency, then they're like the hiker in the Model Penal Code example. I trust the prosecutors will order them turned loose.