For Speaker Ryan, It's A Marriage Of Inconvenience With Trump And Clinton 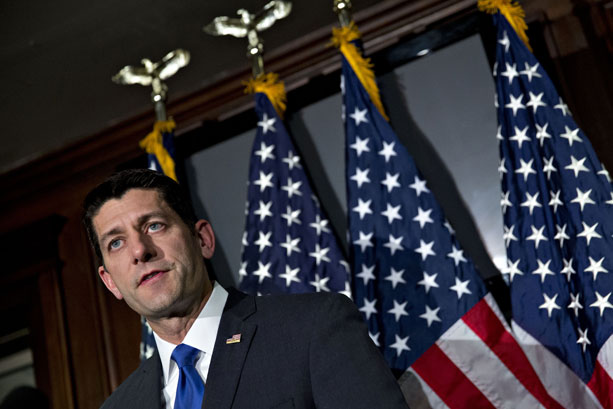 Hard to believe, but it's now more than twenty years since a forlorn Princess Diana went on the BBC to discuss a future queen's ransom of troubles - bulimia, postpartum depression, an extramarital affair and competing with Camilla Parker Bowles for her husband's affections.

That interview yielded this signature sound bite: "There were three of us in this marriage, so it was a bit crowded."

Remember this line if and when Donald Trump and Hillary Clinton debate next month.

The polls tell us there are two principals in this election. And, if those numbers hold up, there will be only two candidates - Clinton and Trump - on the three debate stages.

Let's start with assumption that the Senate goes Democratic this November. The New York Times gives it a 60% chance of happening.

That sounds about right considering Republicans have the same problem in Senate contests as they have with the national election: no room for error.

If GOP incumbents fall in Illinois and Wisconsin, as expected, and Evan Bayh wins back a seat in Indiana, that leaves the Democrats only two contests shy of an absolute 51-seat majority (that's counting two independent senator who caucus with the D's). And that seems plausible, as GOP Senate incumbents are playing defense in Arizona, New Hampshire, North Carolina and Pennsylvania.

(If you're looking for a hell scenario, try a Senate deadlocked at 50-50: Democrats probably would try to get Maine Sen. Susan Collin to cross over, ala Jim Jeffords back in 2001; Republicans might try the same with West Virginia Joe Manchin).

Meanwhile, Ryan stands a much better chance of returning as Speaker in the 115 Congress. And takes us back to the idea of him as the third person in this presidential election.

If Donald Trump prevails, there's the question of how the nation's two most prominent Republicans would get along.

They're not friends, or enemies, or even "frenemies" for that matter. Ryan's endorsed Trump. He's also suggested that the endorsement isn't etched in stone.

But what does Ryan do in Trump's 100 days, if there's such a creature? Does he push the new president to back down from the Mexican wall pledge? While the two might find common ground on tax reform, how hard does the Speaker push for his long-desired entitlement reform?

Fitting for the man in the middle, Ryan may soon find himself in yet another uncomfortable position: the object of Democrat affections. That is, if you believe the Wikileaks data-dump showing the Democratic National Committee concerned that the Clinton campaign wanted to praise Ryan as the anti-Trump - the kind of sweet-nothings that congressional Democrats wouldn't like.

But let's now suppose that it's a Hillary Clinton presidency and, unlike the last three men to hold the office, she enters the job facing a divided Congress.

Here are two scenarios to entertain:

First, Mrs. Clinton uses a big Electoral College number to claim a policy mandate (her husband received 370 electoral votes in 1992; 379 in 1996 - twice failing to win a majority of the popular vote).

And what happens if Clinton preys on Republican consternation over its dwindling Hispanic support to try to strong-arm Ryan into a deal on immigration reform?

One other interesting what-if about a Clinton-Ryan relationship: just how civil would it be? If she's smart, a President Hillary Clinton mounts a full-on charm offensive if Ryan winds up as the last Republican standing in 2017: invite him down to the White House for diner and a movie, bring him along on the first overseas trip.

But that's assuming a Clinton White House operates in sweetness and light - something maybe beyond Hillary's insecure bandwidth.

And it also assumes a Republican House doesn't junk up the first year of a Clinton presidency with investigations into all the minor things - State Department schedules, Clinton Foundation quid pro quos - that are getting bypassed in 2016.

The funny thing about this election: no one is likeable. Going by the latest YouGov/Economist poll, Trump is 27 points underwater (35% approve, 62% disapprove). Clinton likewise is underwater, though closer to the surface (44% approve; 53% disapprove).

As for Ryan, he represents one-half of an institution - the U.S. Congress - that scored a whopping 12% approval in the same poll (a year ago, Congress was steaming along with 16%).

Maybe that's Ryan's way out of this marriage. You need 15% to get on the presidential debate stage; Congress isn't there.

If only the Speaker can figure what to do next February, when one fewer person will be in this marriage.