If Trump Wants To Be The One, Why Not Promise One Term And Done? 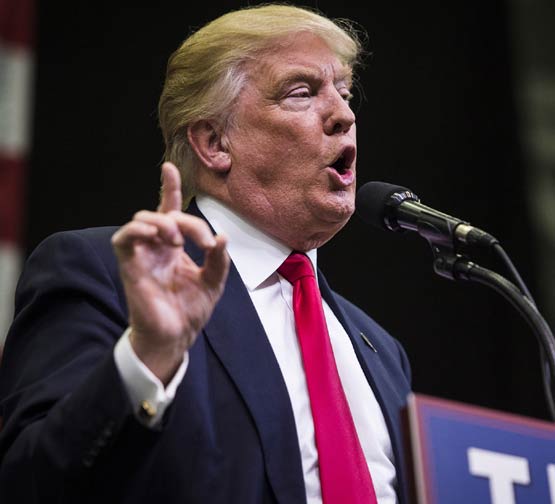 It just wouldn't be a day on the campaign trail without a little media snark directed (fairly, sometimes unfairly) in Donald Trump's direction - yesterday being no exception.

Noting this Trump boast - "At the end of four years, I guarantee you I will get over 95 percent of the African-American vote. I promise you." - ABC News dryly added that the words were directed at "a largely white audience [in] Dimondale, Mich., a town where in 2010 just 9 of the town's 1,234 residents were black, according to census data."

Let's set aside the silliness of what Trump promised. Since the 1964 election and Lyndon Johnson cashing in on having signed that year's Civil Rights Act (LBJ received 94% of the black vote in that contest - a number not surpassed until 2008), the best a Republican has done with America's black electorate is Gerald Ford's 15% in 1976.

What concerns me more: the idea of Trump talking about his re-election prospects when he should be doing just the opposite.

If I were Trump, I'd promise to serve but one four-year term and voluntarily check out after November 2020.

Moreover, I'd make this announcement next month, in my first debate with Hillary Clinton - and challenge her on the spot to make the same pledge.

First, there's a historical model for Trump. And that would be James K. Polk, arguably the nation's only "successful" one-term president (ironically, it was only a year ago that Jeb Bush, the son of one-term president, who was talking up Polk).

The last in the Jacksonian line of Democrats who ran in part on a deep distrust of the federal government, he pledged to serve only one term while seeking the job back in 1844. Polk ran on the annexation of Texas, expanding west, settling the northwestern territorial dispute with Great Britain, reducing tariffs and reforming the nation's banking industry.

Indeed, after only one term and making good on his agenda, Polk kept his word and returned to his native Tennessee (it was a brief post-presidency, as he died just three months after leaving office).

Trump, like Polk, could frame three or four policy proposals as the core of what he plans to accomplish over the next four years.

And leave it at that - and, leave after that.

Consider that, since the Democratic National Convention and amidst Trump's gaffe spree, Clinton has kept a relatively low profile. Just look at her media strategy: lots of social media, but limited interaction with the mainstream press.

Why? Because the Clinton campaign understands that, as long as the election is a referendum on Trump with the media scrutiny centered on him and not her, she likely will slip into office.

Trump won't get far winning hearts and souls and late-inning converts. But if there's a sliver of the electorate that might vote for him given the choice of four years of his bombast versus eight years of her brushes with the law, why not take a shot?

Finally, the third argument in favor of a "one and done": at this point in the election, Trump needs to view the remaining 79 days as a guerilla operation more so than an all-out war.

Showing up in Louisiana was a good start: for Trump, it was breaking from the ennui (and rhetorical pitfalls) of large-scale rallies and stump speeches - and forcing her (and President Obama) to react to his initiative.

Trump should take the same approach in his three debate encounters with his opponent. Hillary Clinton has more experience in such one-on-one encounters both this past year and eight years prior. And she knows more about policy and the in's-and-out's of government than does he.

However, there's one area where Trump has an advantage: on the stage, he's quicker on his feet.

Mrs. Clinton, on the other hand, retreats to a bad place of double-talk and exaggerations when put on the spot.

This should be Trump's aim in each debate: force his opponent into a series of pledges she may or may not make. If I were doing the choosing, I'd go with a one-term pledge, refusing to engage in any political fundraising of any sort while in office, and banning all political employees from secondary incomes (if Hillary refuses to go along on the latter, that's an invitation to discuss Huma Abedin's time at the State Department).

Such a strategy comes with risks. Some will dismiss a one-term pledge as a sign of weakness, if not an act of political desperation (this may be why John McCain almost did it, in 2008, but ultimately backed away).

Moreover, a debate over campaign aides' moonlighting will bring up, for example, Paul Manafort's Ukraine ties and, by extension, Trump's vetting skills.

But at the point, Trump should be thinking outside the box. He's an unconventional candidate in the middle of an unconventional election. And he sorely needs to shift the conversation back to the Clinton campaign.

For Trump, an interesting concept: hire me - and I'll save you the trouble of firing me.