How will McConnell and Ryan fare after the election? 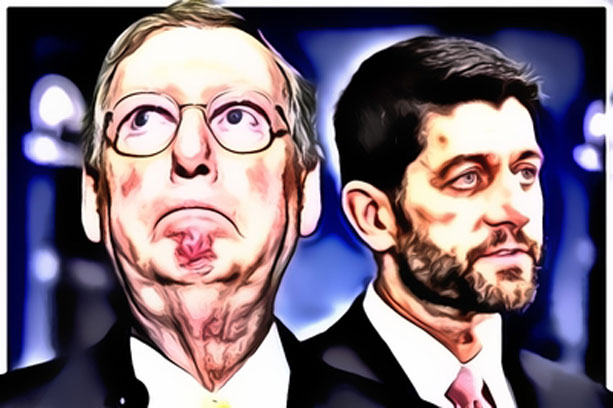 McConnell acted quickly and perfunctorily in giving his support and then spoke about Trump almost invariably in negative terms (e.g. chiding him for being off-script, questioning the viability of his campaign). Ryan agonized and dragged his endorsement out.

McConnell made clear that he did it only because he is in a leadership spot in the GOP; Ryan tried to intellectually defend his decision. Ryan was constantly left to explain how he could support [fill in the blank -- a racist, a Putin sycophant, a NATO-basher].

McConnell never posed as anything but a hard-as-nails political insider. No one really expected anything but a politically cagey decision. Ryan wants to talk about the soul of the conservative movement; people who admired him for his principle came away seriously disappointed. ("His support for Trump is obviously damaging his brand as a moral and intellectual leader of the party. And it appears to be scoring him few points with the Trumpkins," radio talk-show host Charlie Sykes is quoted as saying.)

McConnell made clear that his members could endorse or not, as their races demanded. Ryan made it virtually impossible for other House members to hold out. (If the party's head wonk is with him, what's your problem?)

It's far from clear that any of this matters. The Senate majority will turn on how well salvageable incumbents in blue and purple states-- Sens. Kelly Ayotte, R-N.H., and Pat Toomey, R-Pa. -- can run separate from Trump and much stronger than Trump does (probably by double digits). If the GOP Senate keeps the majority, McConnell -- by giving members wide berth to navigate as they saw fit -- won't get nearly enough credit in public, but the candidates he helped and knowledgeable party insiders will understand how well he played a rotten hand.

Meanwhile, unless a true landslide ensues, the House majority likely holds. If not, Ryan is unlikely to get blamed for a debacle that big. He will therefore almost certainly remain the speaker or minority leader, but one whose reputation has been smudged considerably.

The long-term ramifications of their strategies for handling Trump are uncertain, but in 2017 we should look for some changes within the dynamic in Congress, in part from the contrast between McConnell's rip-the-bandage-off-quickly tactic vs. Ryan's public agonizing.

First, whether narrowly in the majority or relegated to the minority, McConnell is likely to enjoy great solidarity and support within the caucus if/when Hillary Clinton is in the White House. They'll owe their majority (if they keep it) to McConnell and other political insiders who came through with big bucks (diverted from the presidential race). If they fall just short of the majority, his mastery of Senate process will be critical. Those senators up for reelection in 2018 will need his help and political wits.

In the short run, Sen. Ted Cruz, R-Tex., may be a somewhat diminished figure (because he showed lack of even plurality support in the party, he didn't take on Trump until late in the game and made a scene at the convention). In any case, Cruz may have come to appreciate how critical it is to work with others and produce some legislation. He cannot afford to be a perpetual troublemaker.

The level of support McConnell enjoys from his own troops in turn will help determine whether McConnell can establish the sort of bipartisan relationship that Ronald Reagan and Tip O'Neill had, which he was not able to accomplish with President Barack Obama. McConnell has repeatedly said that difficult reform on the budget and entitlements can come out of divided government. Provided that McConnell helps stem the losses on his side, he may have just a bit more success brokering deals with the Clinton 45 White House.

In addition, look to see whether within the Senate and in the party at large the #NeverTrump Republicans (Sen. Jeff Flake, Sen. Ben Sasse, Sen. Mike Lee) become more influential. They've gone a long way toward debunking the idea that "conservative" means "crazy" or "obnoxious. They've generally been on the side of constructive reform and may serve as critical post-Trump leadership.

As for Ryan, he'll have to work hard to maintain his profile as the policy leader of the party and to keep both pro- and anti-Trump elements on his side. He managed to annoy both with his handling of Trump's campaign, but there is no conceivable alternative as speaker. Both because he was an unsteady hand and because the most vulnerable members who lose may be among the most moderate, Ryan could well have his hands full with a grouchy, smaller and more dogmatic conference. He'll need to make the case over and over again that the only way the party as a whole returns from the political wilderness is by adopting innovative policies with wide appeal.