Post-Trump Republicans: To shun or not to shun? 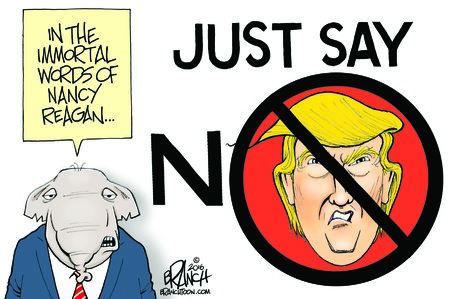 The #NeverTrump Republicans have about had it with the Trumpkins -- the apologists on Fox Non-News, Republican National Committee Chairman Reince Priebus telling us not to believe what we read (we suggest not believing Donald Trump is being audited), the anticipatory claim of cheating in Pennsylvania, where Trump trails by double digits, the ludicrous "get on message" chorus, and the supply-siders who pretend Trump is a fiscal conservative (ignoring his plans to enlarge the debt, enact protectionist barriers, etc.). It hardly matters to the #NeverTrump contingent whether the Trumpkins are sincere or simply playing on the ignorance and biases of their audience.

With Trump's defeat now all but inevitable, the most cartoonish of the Trumpkins have panicked and turned to blaming those who tried to warn the party and who opposed Trump from the get-go. Go figure. No, Trump's loss and the humiliation of the GOP will rest squarely on the shoulders of Trump, right-wing media shills, the soulless RNC chairman, elected Republicans too spineless to oppose him and, most of all, the primary voters who lifted him to the nomination.

Republican politicians who cannot bear to break with Trump should save the eye-rolling and head-shaking, the empty words of despair and excuse-making. (He's gone too far. It was only a joke.) At this point the damage is done; elected Republicans who could have repudiated him when it made a difference did not. They'll be seen in a different light by many conscientious conservatives.

For the opponents of Trump -- some of whom have even organized for Hillary Clinton -- thoughts naturally, desperately turn to the post-Trump era. Some argue for a "purge" of the Trumpkins, while others call for kumbaya unity. The notion of a "purge," however, is misplaced. Aside from a new chairman and total housecleaning at the RNC, which is standard fare after a party blows a presidential election, the GOP is not capable of "purging" people from a voluntary organization based on self-identification and registration. Alas, there is no political desert island to which to send the Trumpkins.

This does not mean there are no consequences for the Trumpkin cheerleaders. The party may not be able to "purge" disagreeable elements and individuals, but it can shame and shun them. (Is there really a place for an American Conservative Union that backed Trump? Maybe CPAC is past its expiration date.) There's no reason to invite to party gatherings Trumpkin enablers such as Ben Carson and Newt Gingrich to pontificate on conservative values. These are cynical hustlers who led the party into a ditch.

Republicans should consider carefully who did what during the debacle of 2016, and how, if at all, they can go about reassembling a viable center-right national party. A scalpel in this case is preferable to a machete.

The party will be badly in need of political regeneration and ideological rehab after the November elections. On the political front, elected Republicans (e.g., Sen. Jeff Sessions, New Jersey Gov. Chris Christie) who actively assisted Trump are not going to be the new face of the GOP. Christie is term-limited; Alabama voters should be able to find someone who better defends conservative principles and rejects anti-immigrant animus. Running mate Mike Pence's career for all intents and purposes should end with a November defeat.

Figures such as Sen. Marco Rubio, R-Fla., who floundered when confronted with the Trump phenomenon may get re-elected, but are not ideally suited to repudiate the tenor and message of Trumpism. By contrast, those who resist bullying and pleading to support Trump (e.g., Sen. Ben Sasse, Sen. Tim Scott, Sen. Mike Lee, Gov. John Kasich ) should be commended and viewed with new respect.

The party would do well, as did the Democrats in the 1970s, to form an organization within the GOP akin to the Democratic Leadership Council or Coalition for a Democratic Majority, in order to steer the party back toward the center, repudiate the politics of divisiveness and introduce a new generation of leadership. For such an undertaking, Republicans who steered clear of Trump and Trumpism will be needed. In essence, the Republicans who knew enough to stay away from Trump's convention (e.g., New Mexico Gov. Susan Martinez) and stars who have shown the capacity to unify their constituents under the banner of conservative reform (e.g., South Carolina Gov. Nikki Haley) should now step up to lead the post-Trump GOP.

The good news is that on policy matters, House Republicans under Speaker Paul D. Ryan have gone a long way toward devising a conservative reform agenda aimed at the middle and working classes. Ryan, having been compromised by Trump, may not be the ideal political leader of the party, but it would be foolish to throw out the baby (reform conservatism) with the bathwater. Know-nothingism in the form of anti-free-trade and anti-immigration furor must be rejected. Repudiating policy lies and urban myths is critical but not sufficient.

The new center-right agenda must depart from the 1980s' economic handbook and fully embrace the 21st century, which is far more inclusive and socially libertarian than deep-red enclaves where Republicans predominate. On the tax front, cuts to the top individual rates are of limited economic benefit; a more cogent and politically savvy agenda would include corporate tax reform to remove cronyism and promote growth, including full expensing of investment. Instead, the party should look to payroll tax cuts to encourage hiring and work, as well as expansion of an earned-income tax credit to help poorer Americans who are willing to work.

Moreover, the party cannot consider spending cuts and tax reform as the end-all-and-be-all of economic policy. The key is increasing worker productivity, which means investing in workers and attracting the best and the brightest. Innovation in education, health care, job retraining, legal immigration and criminal justice should be the party's focus as it looks for areas where it can agree with the new president and oppose her where it cannot.

More than the personnel and the agenda, however, the party must affirmatively reject the spirit of Trumpism -- an approach to politics dismissive of facts and devoid of empathy, one that seeks to pin the downsides of globalization on foreigners. Pandering to anger, resentment, victimhood and prejudice is as immoral as it is, ultimately, ineffective. In many cases, that will require politicians and policy leaders to repudiate malicious forces -- be they from alt-right websites, dumbed-down cable TV non-news or Beltway groups preaching ideological purity.

Trump's core base -- white, lower-income and non-college-educated men -- cannot be treated as delicate flowers, too frail to assume the responsibilities of informed citizenship and too dim to understand the demands of a highly automated economy. It is time for some tough love: If you don't have technical skills or a college degree, you're unlikely to attain a middle-class lifestyle. Immigrants and free trade are not the problem; preparation for the 21st-century economy is. In any event, you owe your fellow Americans civility and respect.

Evangelical Christians may have permanently minimized themselves as a political force in America after breaking the hypocrisy meter with endorsement of Trump. Roe v. Wade is not going to be reversed, nor is same-sex marriage going away. A Republican can win the presidential nomination with or without evangelicals.

The so-called values voters and especially their leaders (many who disgraced themselves in support of a raging narcissist, one entirely lacking in Christian virtues) would be wise to rediscover values such as respect, kindness, humility and honesty, and devote themselves to real issues -- fighting poverty, alienation, addiction, etc. If they want to regain stature, they might start by demonstrating concern for their brothers and sisters and setting a good example in rhetoric and deportment.

There will be time for kumbaya unity -- but after the party takes stock and takes responsibility for its grave missteps. New leaders and contrite veterans can advance a viable agenda with broader appeal. They should turn off talk radio, find real news to watch, treat hate-mongers and charlatans with disdain and reconnect with communities and civic organizations. Once they reacquaint themselves with 21st-century America as it is -- not as right-wing cranks think it was or should be -- they'll be better prepared for leadership.