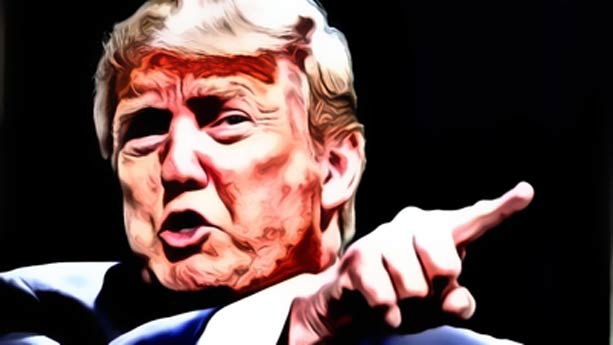 A century ago, Donald Trump might have gone to prison for suggesting that "the Second Amendment people" might find a way to stop Hillary Clinton's agenda as president. Today, the First Amendment protects him -- barely.

It's still a federal crime to threaten the life of the president, and people go to jail for it all the time, despite the apparent abridgment of free speech. But while Trump's words would probably get him a Secret Service visit if he were an ordinary crazy person, they wouldn't lead to prosecution.

The law here is 18 U.S.C. Section 871(a). First passed in 1917 and used to punish threats to Woodrow Wilson's life, it makes it a felony to utter a threat of bodily harm against the president "knowingly and willfully."

Originally directed only against the president, vice president or others in line for the office, the law was subsequently expanded to include "a major candidate for the office of President or Vice President, or a member of the immediate family of such candidate." So Clinton is covered by the law, even though she isn't president.

The U.S. Supreme Court has considered the meaning of the law just once, in the 1969 case of U.S. v. Watts. In a short, unsigned per curiam opinion, the justices said the law was constitutional because "the Nation undoubtedly has a valid, even an overwhelming, interest in protecting the safety of its Chief Executive."

But invoking the First Amendment, the court also said that "a threat must be distinguished from what is constitutionally protected speech." And it reversed the conviction of an 18-year-old who, at a Washington Monument rally, said that if drafted he was "not going. If they ever make me carry a rifle the first man I want to get in my sights is LBJ." His comment, the court held, was "political hyperbole," not a "true threat."

Was Trump's comment political hyperbole or a threat? It was certainly the former -- but whether it was also a true threat is difficult to determine. That's where more recent interpretation of law comes in.

In the 2011 case U.S. v. Bagdasarian, the U.S. Court of Appeals for the 9th Circuit said that the government must prove two things to get a conviction under the statute. The first is that people hearing or reading about the statement "in context" would consider it "a serious expression of an intent to kill or injure a major candidate for President." This is what lawyers call an "objective" test: It asks in essence what a reasonable person would think the statement means.

This component is a close call when it comes to Trump. Some reasonable people would probably consider his comment about the Second Amendment people a joke; others would consider it a true threat. In criminal law, ties go to the defendant, and Trump probably wouldn't be convicted. But it's conceivable that a jury might think the threat was real.

The second requirement according to the 9th Circuit is that the defendant actually intended "to communicate a serious expression of an intent to commit an act of unlawful violence to a particular individual." It's hard to prove such a subjective intent, and that alone would suffice to get Trump off the hook.

There's also the technicality that Trump didn't threaten to kill Clinton himself -- he suggested that others might want to "do something." There's a district court case from 1945 that says the law "does not penalize the imagining, wishing or hoping that the act will be committed by someone else." Trump could certainly defend himself by saying that, at the most, he speculated that others might act -- although that wouldn't necessarily protect him against a charge of inciting violence.

To be sure, the fact that Trump's words are likely protected political speech doesn't mean that they would have no consequences, at least if they had been uttered by someone else.

The Secret Service investigates a huge number of threats against presidents -- although it doesn't disclose exactly how many. Prosecutions go forward even without very much proof that the defendant was really going to do anything. Just this past January, a Wisconsin man was convicted of threatening President Barack Obama's life even though the only weapon he owned was a slingshot.

When the law was first passed, Trump could have gone to jail. In 1918, a federal appeals court sustained a conviction against a man who said, "Wilson is a wooden-headed son of a bitch. I wish Wilson was in hell, and if I had the power I would put him there." And in those days, prosecutors were happy to go after presidential candidates. Eugene V. Debs, the Socialist candidate for president, was convicted of encouraging resistance to the draft in violation of the Espionage Act. The Supreme Court upheld his conviction, and he served time in jail.