Clinton has yet to respond to Trump's attack on globalism 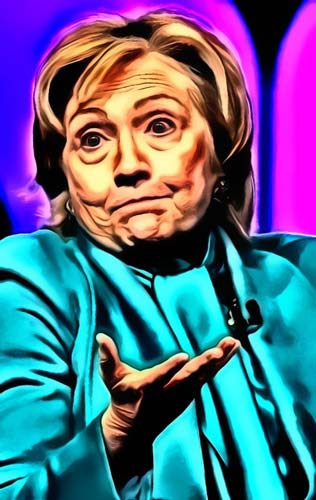 Hillary Clinton offered a predictable and comfortable response to Donald Trump's economic speech: It's just more Republican trickle-down economics. What she has yet to address fully are Trump's non-Republican views on trade and whether she agrees or disagrees with his sharp critique of globalism.

Trump's economic speech at the Detroit Economic Club was policy in two parts. The first was orthodox Republican economics. Among other things, he called for tax cuts on individuals and businesses, tax simplification and the paring back of federal regulations.

This was the easiest target for Clinton as a way of drawing traditional distinctions with her Republican rival. She said Trump had "tried to make these old, tired ideas sound new," adding, "His tax plans will give super-big tax breaks to large corporations and the really wealthy. . . . He wants to basically just repackage trickle-down economics."

Trump's tax and regulatory proposals played well with the Republican establishment and in particular with those in the congressional wing of the party. The speech was a bow to those in the party who continue to hope that their nominee will sound and act more like a conventional Republican - even though his views on issues such as entitlement reform and the size and scope of government appear at odds with their views.

The second part of Trump's plan, which repeated his views about trade, offered the other side of Trump. It was far from GOP orthodoxy. The headline on a Wall Street Journal editorial about the speech said, "Progress on taxes and regulation but his trade policy is a jobs killer."

Yet trade policy, more than tax policy, has animated Trump's thinking for decades. It was part of his first speech as a candidate and has been a core economic message throughout the campaign. His Monday speech was another full-throated assault on the trade policies of presidents from both parties that date back decades.

At one level, Trump and Clinton are in agreement on trade. He opposes the Trans-Pacific Partnership (TPP), and after championing the idea of such a pact while she was secretary of state, Clinton, too, opposes it. Her opposition represents a clear break with President Barack Obama, who noted last week that, wherever she stands, he still wants to see it approved before he leaves office.

Clinton came out against the agreement last year to put herself in alignment with Vermont Sen. Bernie Sanders during the primaries - and also to associate herself with the views of liberal activists, whose hostility to trade agreements is a long-standing policy and whose influence in the primaries represented a threat to her candidacy.

But in doing so, she put herself at odds with the views enunciated by her husband, Bill Clinton, when he was president, and raised questions about whether her change of heart was mere political expedience.

Which is why her position on trade and global economics has remained suspect to those on the left - so much so that, when Virginia Gov. Terry McAuliffe suggested during the Democratic convention that she would reverse herself and find a way to support the TPP after the election, her team rushed to squash the controversy.

She's anti-TPP now and anti-TPP after the election, they said, and McAuliffe, long one of the Clintons' closest friends, retreated. That got her safely through the convention, but it did not answer all the questions about her views about trade and globalism.

Before the conventions, Trump delivered a speech devoted almost solely to issues of trade and global economics. Coverage focused heavily on his break with Republican policy, but it was notable for another reason. It was not simply an anti-trade message but one of the most direct assaults on the net effect of globalism delivered by a major party candidate.

Trump denounced globalism as something that has benefited Wall Street and elites but that has left workers behind. "Globalization has made the financial elite who donate to politicians very, very wealthy," he said.

The view of most politicians who support big trade agreements is that, on balance, globalism is good for the world economy and nations. According to this view, there are winners and losers in a global economy, but the benefits outweigh the costs, and there can and should be policies to cushion the effect on those who have been harmed by the movement of jobs and capital.

Trump seems to take the opposite view, that on balance globalism has produced more losers than winners, or at a minimum that those who have gained the most have ignored those who have been harmed. He has tried to turn the debate upside down, seeming to reflect the views of his core constituency of white, working-class voters whose wages have stagnated and many of whom have seen their jobs moved elsewhere.

What does Clinton really think about this aspect of economic policy? How do her views today square with what she has thought and advocated during her public career? If there is a difference, how substantial are the changes in her views and what produced a change of heart?

Those are issues about which she has so far been relatively silent. She found a safe zone during the primaries by putting herself close to Sanders and was not pressed to articulate broader views about trade and international economics much beyond that. Trump has presented her with a challenge; is she is prepared to take it up?

Her husband never shrank from this challenge, either as a candidate campaigning in favor of the North American Free Trade Agreement in front of union audiences bitterly opposed to it, or as a president who needed Republican votes to pass the agreement over the opposition of many in the congressional wing of the Democratic Party.

Obama too has been a strong advocate of trade and globalism, as his comments about the TPP last week indicated, just as Sanders and Trump have been consistent opponents of a string of trade agreements and of the overall effect of globalism. Where exactly is Clinton in this debate?

In her responses to Trump's Detroit speech, Clinton did not address what the GOP nominee said about trade. It's difficult to believe that was an oversight. Her comments instead focused on taxes and regulation and included criticism of his team of economic advisers as a bunch of wealthy financiers who would benefit from the tax policies he outlined.

No doubt Democrats believe there is much to question about Trump's economic views. Clinton will make the most of the areas where she thinks he is most vulnerable. On his assertion that he will make sure goods are produced here at home, she has chosen to belittle him over how, as he complains about jobs being shipped overseas, the clothing that bears his name has been manufactured abroad.

But she has not said whether she think his overall views about trade and about globalism are as abhorrent as she thinks his tax and regulatory policies are, even if they are currently in the same place on the TPP. Nor has she indicated whether she believes that, on balance, the benefits of globalism significantly outweigh the costs.

Trump has put down a clear marker on these issues, however controversial. Does Clinton not owe the public a fuller explanation of her views on a topic that her rival has made central to his candidacy?