Should Jeb have fired back when Hillary attacked? 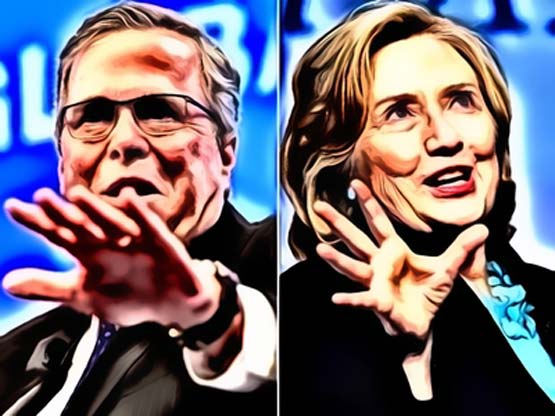 Some observers say former Florida Gov. Jeb Bush seemed unprepared when Hillary Clinton attacked him as both spoke to the National Urban League meeting in Ft. Lauderdale Friday. Members of the Bush circle say Bush wasn't surprised at all. Whatever the case, Bush, who spoke after Clinton, had to make a quick decision: Should he ignore Clinton's attack and give the speech he planned to give, or should he include a response, if only a brief one, to show that he will not let Clinton's accusations go unanswered?

There's no doubt Clinton slammed Bush directly and repeatedly, focusing on the concept of opportunity and a "right to rise" on which Bush has based his campaign. "I don't think you can credibly say that everyone has a right to rise and then say you're for phasing out Medicare, or repealing Obamacare," Clinton told the Urban League audience. "People can't rise if they can't afford healthcare. They can't rise if the minimum wage is too low to live on. They can't rise if their governor makes it harder for them to get a college education. And you can't seriously talk about the right to rise and support laws that deny the right to vote."

That covered a lot of ground. Medicare, Obamacare, the economy, education, civil rights — Clinton packed a lot of jabs into one paragraph. And there was no doubt who the target was — in a speech delivered in Florida, who else would "their governor" be? "In a biting surprise attack, delivered as Mr. Bush, the former Florida governor, waited backstage … Mrs. Clinton portrayed him as a hypocrite who had set back the cause of black Americans," wrote the New York Times' Michael Barbaro.

So what to do? When it came time for his own speech, about an hour later, Bush chose not to respond, delivering an address that stressed his accomplishments in Florida, focusing most heavily on education but also touching on job creation, economic growth, crime, and issues involving race. (On that last note, Bush included a sentence praising the president: "When President Obama says that, quote, 'for too long we've been blind to the way past injustices continue to shape the present,' he is speaking the truth.")

By most accounts, the speech was politely received by the heavily Democratic group. Outside the room, it won some positive reviews. When Republican strategist Rick Wilson tweeted that Bush's speech was "impressive work," CNBC and New York Times analyst John Harwood responded, "Best speech delivery I've seen from him so far, by a mile. It's why he'd be very tough to beat in November."

But Bush had left all those Clinton charges unanswered. And to some conservatives who question his resolve to fight, Bush's silence had an ominous sound to it. After all, this was the Jeb who had presented Hillary with the National Constitution Center's "Liberty Medal" in 2013. And this was the Jeb who has sometimes seemed inclined to criticize fellow conservatives at least as much as Democrats.

"Echoes of '92: Hillary implies Jeb's a bigot on stage yesterday, Jeb responds by praising Obama," tweeted radio host Laura Ingraham. Later, noting praise of Bush, Ingraham added: "Clockwork: New York Times will come to Jeb's defense as the 'adult' in the room … until he becomes the nominee." It seems unlikely that Ingraham will be alone in coming days; don't be surprised if Bush's decision not to answer Clinton becomes another point in the Jeb-is-a-RINO case put forward by some conservatives.

But what should Bush have done? I asked a number of GOP insiders — some strategists from rival campaigns, some unaffiliated — for their reaction. All wanted to speak anonymously, so take that into account. But they represented a range of opinion on Bush that reflects the dilemma he faced before the Urban League.

"This is the sort of story that really worries Republican donors and activists alike," said one strategist from a rival campaign. "The Clintons and Bushes are obviously friendly and close, but only the Clintons appear ready to take off the gloves. After their first confrontation, it's pretty obvious why the Clintons are openly hoping that Bush wins the nomination."

"This underscores why Jeb Bush — contrary to what his campaign and the mainstream media want people to believe — is not at all well suited to beat Hillary Clinton in a general election," said a strategist from another campaign. "Not only does he let Clinton's disingenuous attacks go completely unanswered, but his background and wealth take two of the most effective lines of attack against Clinton off the table: that she's a legacy candidate from a political dynasty and that she's an out-of-touch Washington millionaire who has no idea the struggles everyday Americans are facing."

Another campaign rival — there are a lot in this enormous GOP race — slammed both Clinton and Jeb: "In their premature eagerness to run against another cloistered candidate, an unimaginative Clinton campaign nakedly exposed its utter contempt for the voters' ability to see the audacity of their hypocrisy. Hard to tell which campaign is more disconnected from reality — the one that couldn't see it coming or the one that can't see itself."

Others didn't want to be quoted at all. One suggested the incident would make little difference in the long run, but that Bush wouldn't have been hurt by a back-and-forth with Hillary, because it would help create the impression in the general public that he's already the Republican nominee. Bush would be justified in doing so because she started the fight.

Some others, unaffiliated and without a direct stake in the question, saw Bush's side. "To the dismay of the blood-sport hobbyists who drool at the sight of brickbats flying, Bush chose a higher path," wrote one. "His mission was not to engage Clinton but rather the leadership present and folks who focus on making America better for everyone. By not stooping to her level and not taking the bait, he won this round."

As for the Bush team itself, campaign spokesman Tim Miller stressed that Bush regularly criticizes Clinton, but that the Urban League meeting wasn't the place to do it. "Governor Bush went to the Urban League to offer a unifying message that laid out how his conservative record in Florida helped the black community — increasing minority income and student achievement in particular," Miller wrote via email. "Secretary Clinton offers countless opportunities for criticism and Gov. Bush does so with regularity, including later that day on Cuba! This was an occasion to make a case that draws people who don't hear from Republicans often to the conservative cause. Gov. Bush is uniquely positioned to do that given his track record in this area, and that's something anyone who wants a conservative president should want so that we can actually win a national election again."

Clinton delivered her speech, Miller took a sharper tone, tweeting, "Clintonesque move to pass over chance to unite in favor of a false cheap shot. When you have no record of accomplishment to point to…" Miller also tweeted, "The DNC and Hillary scramble to attack Jeb today and misrepresent his record betrays their fear of his ability to broaden GOP support." And then: "Could Hillary get any smaller on her trip through Florida? She's one step away from putting a trolling comment on Jeb's Facebook page."

Who's right? The underlying assumption of Bush supporters is that responding directly to Clinton's attack would have been unpopular in the room and would have therefore undercut Bush's goal of expanding the appeal of the Republican Party. Maybe that's correct. But Clinton's indictment of Bush was sharp, far-reaching, and delivered in person, with Bush watching nearby. It called for at least an acknowledgment. And Bush's speech was already a defense of his record as governor. Without rewriting it on the fly, Bush could have placed that record within the context of Clinton's attack and reminded the audience that, contrary to what some speakers told them, Floridians really did have a right to rise when he was governor.