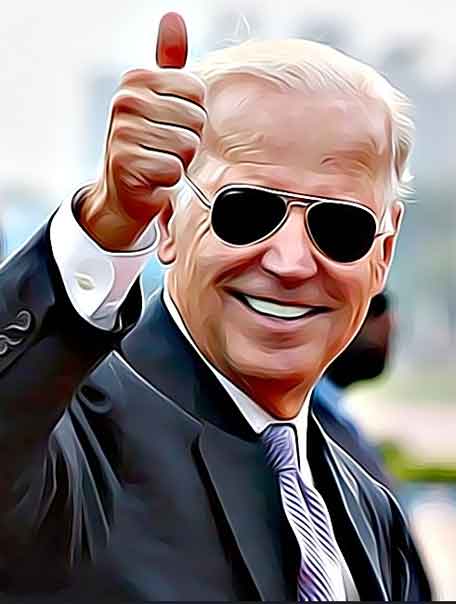 While Joe's biding his time over whether to challenge Hillary, let's review the Vice President's options:

2) Wait it out two or three more months, to see what if any other trouble dogs the Clinton campaign. The key date here: November 27, which is the filing deadline for next February's New Hampshire primary.

3) Take a page out of Bobby Kennedy's 1968 playbook and see how New Hampshire plays out — if Bernie Sanders lands in the Pat Buchanan/Eugene McCarthy sweet spot of 37%-42%. It wouldn't be the first time Biden channeled RFK.

4) Ask Barack Obama what he what thinks. Let's assume the President personally likes Biden more so than the Clintons (especially since some of her State Department choices, such as talking to Sidney Blumenthal, undercut the White House). Then again, Obama is thinking legacy — part of which hinges on having a Democratic successor who doesn't undo his policies. The more electable Democrat at this moment: Biden or Clinton?

One of the more thoughtful looks at the potential impact of a Biden candidacy comes from FiveThirtyEight.com's Nate Silver, who calls it a "Schrodinger's Cat Campaign" in that we don't know what we're getting into until we open the box (proving that Nate Silver knows both Austrian physicists and Big Bang Theory re-runs).

The New Yorker's Ryan Lizza was more blunt: Biden, in his estimation, doesn't match up well with Hillary on youth, gender, broad party support, money, campaigning chops, or lefty cred (though he was ahead of her onsame-sex marriage and making sense of a post-war Iraq).

Actually, it does make sense in that: a) Mrs. Clinton's poll numbers are down (the latest concern: she's losing ground with white women); b) bored Democrats (and a bored media) would like to see some drama on the road to Philadelphia.

Your guess is as good as mine as to Biden's decision. Meanwhile, this much we know about where he fits in with 2016's grander plans:

1) If the Vice President was seriously considering it, then Maureen Dowd has a different column in last Sunday's New York Times. Ms. Dowd is a lot of things, but fly on the wall isn't one of them. Someone fed her exquisite details of conversations between Biden and his now-deceased son, all the way down to Beau Biden's difficulty in speaking. The column worked — we're talking about a Biden run . . . and it rattled the Clintons' cage.

Judging by the calendar, Biden's already behind the eight ball. If history is any guide, the ideal date to announce for president in this election cycle was June 12, 2015. Why? Because, since 1972 and in non-incumbent elections, the winner announced an average of 511 days before Election Day. Only once — 1980 and Ronald Reagan — has the last candidate to join the field won it all.

3) BTW: the candidates who announced closest to June 12 would be . . . Jeb Bush, who formally entered the race on June 15, and Donald Trump, who got in the following day.

That's enough to scare both extremes of the Republican electorate.