The Right Way to Use People 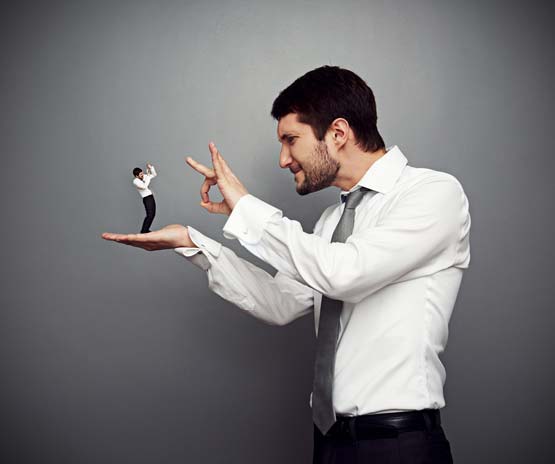 Abuse of Power from Bigstock

“[Rabbi Ben Azzai] says, 'Do not be scornful towards any man, and do not be disdainful of any thing, for there is no man who doesn't have his hour and no thing that doesn't have its place.' ”


Philosophers have said that "the other," by his mere presence, is an obstacle to the full, unrestrained expression of the ego.

"The other" gets in my way, intrudes on my space. His wishes obstruct the path I need to take to reach my goals, and his goals may not be compatible with mine. This is the basic conflict of interests that underlies every battle in the world. It is the source of all the interpersonal struggles, wars, and competition that have formed most of human history on this planet.

At every level, from international relations to family dynamics and every level in between, a person learns at a very early stage that in order to survive, he must use people. He must, in some way, exploit them for his own needs.

In a totalitarian society (and this paradigm includes that little dictator, an either physically or verbally violent husband who subjects his family to his tyrannical rule), others are exploited through harsh commands, through the crack of one sort of whip or another.

In an open, democratic society, other means of exploitation are used: the fake smile, double-talk and flattery — "gentle" psychological pressure, spiced with superficial expressions of appreciation that the victim accepts as compliments, hungry as he is for some crumb of recognition as a person and not just as a functionary to help his operators achieve their goals.

An Israeli journalist gave me a concrete example of this sort of exploitation. For years, he was the parliamentary reporter in the Knesset, and he was riding high. Everyone danced to his drumbeat. Power tingled in his fingertips when the elected leaders of the nation trembled before him and his pronouncements in the paper.

And then the day came when he handed over his scepter to another journalist. A few weeks later, he paid a visit to the Knesset, his stomping grounds of so many years, where he had been the darling of all the key figures. To his astonishment, some of them, who used to practically lick his boots, walked by without as much as a "hello." He might as well have been invisible.

This sort of exploitation has been experienced everywhere by people who have retired from a position of status. The moment they leave their position, they find out how soon the human heart forgets.

Almost every friendship in our society is conditional; as soon as the mutual self-interest dissipates, there goes the friendship. The bottom line is that deep in our hearts, behind the screen of etiquette and sugary smiles, we scorn the being — the human being — who stands before us.

Much as we may talk of respecting others, of revering the individual created in the Divine's image, we scorn him.

Ben Azzai came out against this exploitation.

"Do not be scornful towards any man, and do not be disdainful of any thing, for there is no man who doesn't have his hour and no thing that doesn't have its place."

Superficially, his words might be fueled by pure pragmatism. Don't scorn any man, because who knows — you might need him some day. He might end up in a key position where he can help or hurt you. And then he will remember how you treated him in the past, and you will be the loser. So even if he is unimportant to you now, don't scorn him.

Ben Azzai is apparently teaching us to "Cast your bread upon the waters," as it is commonly understood.

That understanding is to scorn Ben Azzai himself, Heaven forfend, suggesting that he, too, is part of the system of exploitation, except that he is wiser and more experienced, a sort of ancient Dale Carnegie so to speak, teaching us how to "win friends and influence people". Or in other words, how to use people — nicely.

But of course, this is untrue regarding Ben Azzai and his teaching.

Ben Azzai was a holy Talmudic sage, and his dictum penetrates the armor of the grim reality in which we live and reveals the core of the problem, the evil root that has caused society to become so distorted. And through a new understanding of the concept of "man," he tries to correct our basic approach, to cure us of the illness that makes us slaves to self-interest and an enemy to the interests of others.

He also seeks to show us how a person can realize his full potential while sincerely holding others in high esteem.

Consider the explanation of this mishnah by the Maharal (d. 1609): "Do not be scornful towards any man, saying that this person has no importance, that he is superfluous in the world and has no part in the world at all… Do not do this, 'for there is no man who doesn't have his hour.' That is to say, every man has his special hour. Although he has peers who are similar to him in every respect, each individual has his own mazal [destiny], for it is not possible for two people to have the exact same mazal…. And since every individual has his own unique mazal, which no one else has, he is part of this world, and he makes the world complete, such that it takes every single individual to make the world is complete" (Nishmas Chaim, the Maharal's commentary on Ethics of the Fathers).

Since the world was created purposefully by a Divine Creator of unfathomable awareness and infinite understanding, it contains nothing superfluous. This basic principle is founded upon the axiom that the world is a complete, unified, interdependent whole. The science of ecology has contributed much to our understanding of this unity. It has shown us many examples of the mutual complementarities in nature, and the destruction that is wrought when we, in our great folly, upset the balance by harming vital components that seem to us unnecessary and worthless.

Ben Azzai warns us against such thinking: "There is no person who doesn't have his hour," he says. As goes inanimate nature, so goes human society.

There is no useless person; everyone on earth has a role to play in the perfection of the world and of human society. Being scornful of one person is to scorn the world as a whole — including yourself.

You cannot be complete without the person you are tempted to scorn, even if you don't notice his contribution to your life.

Vegetation provided oxygen for all mankind long before the scientific facts of gas exchange were known, and so is the contribution of each individual needed by all others, even though we can't understand that interdependence.

Your fellowman, Ben Azzai teaches, is not an obstacle to you! He is not getting in your way, although it may seem that way to you. By virtue of his uniqueness, his difference from you, he is fulfilling a task in the world — yes, even in your personal world.

If you recognize this fact, if you sense your lack of completeness, if you understand that you are only part of a whole — not flying solo with the world as your footstool — if you realize that you are merely a fraction of humanity, which is composed of billions of people, every one of which is a phenomenon, not a mere cog on the cosmic assembly line, then you will make an about-face in your attitude toward your fellowman.

You will thank every person for the services he provides for you, you will esteem every person just for being human, and you will gladly give of yourself to others, for you know the great secret: every individual complements us all.