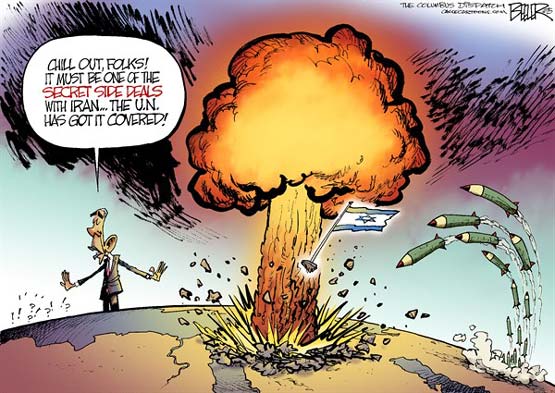 It was obvious the fight over President Barack Obama’s nuclear deal with Iran would get very ugly, very quickly. And so it has.

It was obvious that it would be ugly because the fight over Obama’s appeasement policy toward Iran has been going on since he took office six-and-a-half years ago. And it has always been ugly.

Every time Obama has sided with the mullahs against domestic opponents he has played the Jew card in one way or another. He has blown more anti-Semitic dog whistles than many in Washington even realized existed.

Now the stakes are far higher than a mere sanctions bill. Obama has gotten his deal with Iran. And he’ll be damned if he allows it to go down.

So it is open season on Israel and its supporters.

Secretary of State John Kerry made this clear two weeks ago when he said it will be Israel’s fault if the deal goes down. Since the administration threatens that torpedoing the deal will cause war, Kerry is threatening that the administration will blame Israel if war breaks out.

As for Obama, in his conference call with leftist supporters last Thursday, he attacked AIPAC and the other Jewish organizations for daring to lobby Congress to vote against removing US sanctions from Iran and conflated their opposition to the deal with Jewish Republicans’ support for the invasion of Iraq.

In the president’s words, opposition to his deal comes “partly from the $20 million that’s being spent lobbying against the bill,” and “partly from the same columnists and former administration officials that were responsible for getting us into the Iraq war.”

One of the ironic things about this statement is that while AIPAC studiously avoided taking a position on the Iraq war, (while both of Obama’s secretaries of state and his vice president supported it), two years ago Obama strong-armed AIPAC – against the wishes of its members – to lobby Congress to support his plan to bomb regime targets in Syria. He then left AIPAC high and dry, with its credibility in tatters, when he changed his mind at the last minute and did nothing.

But irony is not the point. The point is demonization.

By casting aspersions on the motives and character of his opponents Obama seeks to end debate on the merits of his plan in order to force Democrats to support it.

And he will need to end that debate quickly. The longer it goes on, the less the public likes his deal.

A Quinnipiac University poll published this week showed that the US public opposes the deal nearly two to one. Although other polls carried out by The Wall Street Journal and CNN indicate near parity between supporters and opponents of the deal, the trend seems to favor opponents of the deal. And some Democrats – including Senator Chuck Schumer – are reportedly beginning to feel the heat.

For Obama to end this debate he needs to make this a popularity contest. And the only nemesis big enough to block debate as far as Obama is concerned in Prime Minister Benjamin Netanyahu. As Obama apparently sees things, if he can secure Democratic support for himself against Netanyahu, then his firewall against Democratic abandonment is safe.

Obama has a problem though. In Israel, this isn’t about Netanyahu.

Whereas Americans oppose Obama’s deal two to one, according to a New Wave poll taken for Israel Hayom, three-quarters of Israeli Jews support Netanyahu’s vocal opposition to the deal and want him to keep it up.

Only 15 percent believe he should stop voicing opposition to the deal.

Similarly, 73% of Israelis believe Obama is not attending to Israel’s interests.

In an attempt to neutralize the inconvenient fact that there is no significant Israeli support for the agreement, the administration has seized upon the small group of retired generals from the IDF, Shin Bet (Israeli Security Agency) and Mossad who have spoken out against Netanyahu’s opposition to the deal. According to J Street, these men will play a key role in the effort to secure the support of Congressional Democrats.

Some of these retired security brass are radicals with records of politicized service. Retired Lt. Col.

Uzi Even, who wrote an op-ed in support of the deal last week, compromised Israel’s bombing raid on Saddam Hussein’s nuclear reactor at Osirak in 1981 when he leaked the planned operation to then opposition leader Shimon Peres. In recent years Even, who served in high-level positions in Israel’s nuclear program, called for the closure of the Dimona nuclear facility. He also served as a member of Knesset for the radical Left Meretz Party for a year or so. To refer to his positions as fringe is an understatement.

Most of the generals who oppose public opposition to the deal and support its promise to keep Iran’s nuclear ambitions at bay for a decade or more, like former Shin Bet directors Ami Ayalon and Carmi Gillon, have no expertise in nuclear issues. So their opinion holds no more validity than that of the average man on the street.

Many of the generals that have been cast as supporters of the deal by Obama’s defenders have actually not supported the deal. They have simply claimed that Israel lacks the means to cancel it and that we need to learn to live with it. Among these voices are former OC Military Intelligence and current Labor Party member Amos Yadlin and former OC Operations Yisrael Ziv.

This view is apparently making headway among some Democratic lawmakers. In an interview explaining his decision to support the deal, Democratic Congressman Adam Schiff from California channeled Yadlin and Ziv’s position. The only problem is that whereas Yadlin and Ziv are powerless to block the US from implementing the nuclear deal as currently negotiated, Schiff has significant power to do so. By voting down the deal he can force the administration to return to the negotiating table and bring back a better deal.

It is still unknown whether the administration played a direct role in organizing the retired generals to support it against three quarters of the public.

But over past few years, the Obama administration has aggressively sought to subvert Israel’s security establishment. The goal has always been to mobilize a significant number of retired generals to side with the administration against the elected government.

Two years ago former OC Central Command Maj. Gen. Avi Mizrachi revealed that the State Department had hired retired Israeli generals, led by his predecessor in Central Command Gadi Shamni, to lobby the Israeli public to support an Israeli surrender of the Jordan Valley. Both the government and the public opposed such a withdrawal.

It is possible that some of the generals who oppose Netanyahu’s handling of the Iran dispute with the administration are convinced by the merits of the administration’s talking points. It is possible that they simply don’t like Netanyahu and want to weaken him. But the fact is that whatever their motivations and regardless of whether or not they are being paid for their statements, these men represent a fringe opinion both among the general population in Israel and among the security establishment.

Whatever their intentions may be, these retired generals are helping Obama get Congress to sign a deal that threatens far more than Israel.

This deal, which guarantees Iran a nuclear arsenal in 10-15 years and permits it to purchase and develop intercontinental ballistic missiles, will enable Iran to develop the means to achieve its highest goal – the destruction of America. This is the substance of the deal. This is why Americans oppose it. And this is why Democratic lawmakers must also oppose it.

For Netanyahu, as for the three quarters of Israelis who support him, opposition to the deal is not the consequence of ill will toward Obama. This isn’t personal. Netanyahu opposes this deal because it is disastrous for Israel. The more Americans know about the deal, the more they will be convinced that it is a disaster for their country as well. It is a shame that some Israelis are helping Obama to hide the truth from them.