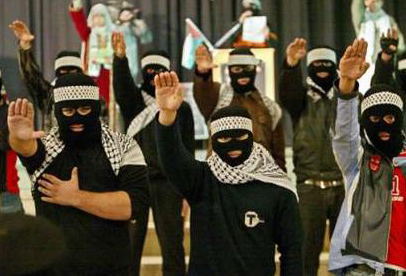 There have been Christians in Mosul for just shy of two millennia, since the first century. There are none today.

The Yazidi are practitioners of Kurdistan's oldest religion, fire-worshippers whose presence in the region predates Islam. They're either being executed or starved to death on a mountain:

We are being slaughtered. Our entire religion is being wiped off the face of the earth.

ISIS are fast-track Nazis. No messing about with a few property restrictions and intermarriage laws as a little light warm-up: They're only in the business of "final solutions", and they start on Day One and don't quit until the last Christian and Yazidi is dead or fled. As I've often remarked about today's exhaustively cleansed Maghreb, Levant and Araby, Islam is king on a field of corpses. But pikers like the Muslim Brotherhood, the Baathists, the House of Saud take their time. ISIS are shooting for the Guinness Book of Records.

Fortunately, progressive opinion in the west hates Jews more than it loves Christians or Yazidi or Shia or Kurds, so ISIS can get on with killing everyone they want to kill. George Packer reports in The New Yorker:

Karim couldn't help expressing bitterness about this. "I don't see any attention from the rest of the world," he said. "In one day, they killed more than two thousand Yazidi in Sinjar, and the whole world says, 'Save Gaza, save Gaza.' "

An engineer and a father of three young children, Karim spent years working for the U.S. Army in his area, then for an American medical charity. He's been waiting for months to find out whether the U.S. government will grant him a Special Immigrant Visa because of his service, and because of the danger he currently faces.

Good luck with that. America's depraved immigration bureaucracy is too busy organizing teddy bears for gangbangers at the southern border and terrorizing bagpipers at the northern borders. So how did helping out the Americans work out for Karim?

Karim had time to do just one thing: burn all the documents that connected him to America—photos of him posing with Army officers, a CD from the medical charity—in case he was stopped on the road by militants or his house was searched. He watched the record of his experience during the period of the Americans in Iraq turn to ash, and felt nothing except the urge to get to safety.

Perhaps it's just as well we're so bad at "winning hearts and minds". We won Karim's heart and mind - and then ran over it in the stampede for the exits. A few weeks ago I quoted Prince Sirik Matak, the former Cambodian Prime Minister, shortly before his murder by the Khmer Rouge:

Mark it well that, if I shall die here on the spot and in my country that I love, it is too bad because we are all born and must die one day. I have only committed the mistake of believing in you, the Americans.

On the lam, trying to keep one step ahead of ISIS, Karim can be forgiven for coming to the same bleak conclusion. In that column, I also cited Bernard Lewis from a few years back and his prescient warning that America risked being seen as harmless as an enemy, treacherous as a friend.

The bad news is that harmlessness will attract more enemies. The good news is there will be fewer friends left to betray.

~I'm still hopping mad about the US Government's bagpipe crackdown. The international piping scene is basically Scotland, Canada and the north-eastern US. On the Atlantic seaboard, it's a cross-border community. Yet since the end of June the official position of the United States Government is that, if someone from northern New Hampshire competes in a bagpipe championship in Quebec, he cannot take his pipes through any US/Canadian land border crossing. So instead of a pleasant three-hour drive from Montreal back to New Hampshire, he has to fly from Montreal to Boston and then drive all the way back, more than doubling the time and vastly increasing the cost.

That's an unacceptable burden to impose on a free people - and, if Americans were as free as all the songs and T-shirt slogans claim, it would not even be entertained.

As I said yesterday, under the insanity of America's hyper-regulatory tyranny, you now have to register musical instruments with the US Department of Fish & Wildlife.

And, even if you do, you still can't drive that instrument over a US/Canadian land border.

Aside from anything else, this will kill the annual Highland Games at Loon Mountain, New Hampshire. I'm already hearing that Scots and Canadians don't want to take the risk of losing beloved family heirlooms to the gauleiters of Customs & Border Protection.

This is how liberty dies, with a thousand cuts, day after day after day. Bill Clinton famously said, "The age of Big Government is over". And in a sense he's right: This is an age of small, itsy-bitsy teeny-weeny government, in which nothing is too inconsequential and trivial not to command the attention of the federal enforcers - until, cumulatively, all the itsy-bitsy teeny-weeny government adds up to the biggest government ever seen.

Where is America's so-called party of small government on this stuff? When are the Republican Party's leaders going to pipe up?