Does putting your religion on a resume help or hurt you? 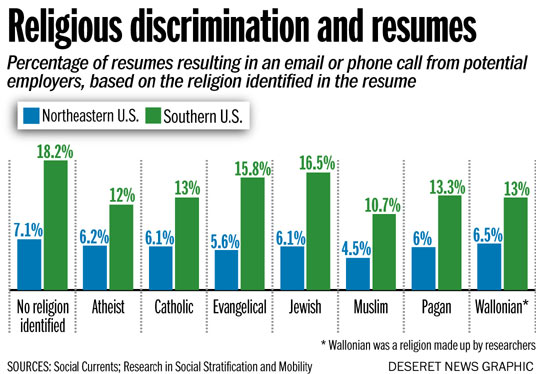 Religious college graduates have some resume revising to do, according to two new studies from a group of University of Connecticut sociologists.

The field experiments on the relationship between religious affiliation and hiring discrimination showed that mentioning involvement in campus religious groups on a resume hurts an applicant's chances of hearing back from potential employers.

"Overt religious expression in the workplace — regardless of the specific religion — may be perceived as potentially offensive to coworkers, clients or customers," the researchers explained. They correctly predicted that employers would respond at a lower rate to resumes that mentioned religion.

But what some employers don't understand, explained human resources consultant Joyce Dubensky, is that religion isn't always the primary focus of a religious employee's day.

"If it's a regular day, I may not be focused on my Judaism. I could be focused on being the only woman in an office of guys," said Dubensky, executive vice president and CEO of the Tanenbaum Center for Interreligious Understanding.

The first study focused on New England employers and showed that when referencing involvement in a Roman Catholic, evangelical Christian, atheist, Jewish, Muslim, pagan or Wallonian (a religion made-up by researchers) student group, an applicant was 24 percent less likely than the control group to receive a phone call from an employer. The control group was composed of those resumes that mentioned a generic student organization like "The Student Alliance."

The second study repeated the field experiment in the South with similar results. Applicants who reported a religious identity of any kind were 26 percent less likely to receive a phone call or email.

Muslims suffered the most discrimination in both regions, receiving 38 percent fewer emails and 58 percent fewer phone calls than the control group in the South and 33 percent fewer total contacts in New England.

Michael Wallace, one of the University of Connecticut researchers, emphasized that anti-Muslim discrimination is likely to increase when applicants have Arabic names. The resumes submitted in both studies used generic names like "Sara Korvel," UConn Today reported.

Wallace, a professor of sociology and the director of graduate studies at UConn, said that the strength of the studies is that they show religious discrimination in two regions with very different religious climates.

Wallace said that there is a notable lack of research done on religious discrimination in the workplace. "Surprisingly, sociologists haven't done a lot of studies of this problem. We found only a scattering of five or six articles over a 30-year period," he said.

Additionally, Wallace and his colleagues were aware that religious discrimination in the American workplace is on the rise. "In the last 20 years, religious-based complaints filed by employees with the U.S. Equal Employment Opportunity Commission increased from 1,388 in 1992 to 3,790 in 2010," the University of Connecticut researchers reported.

By taking advantage of a popular employment Web site, the researchers were able to replicate a resume-submission process familiar to most recent graduates, though on a much larger scale. There were 3,200 resumes sent to 800 job postings in the Southern United States, and 6,400 resumes were sent to 1,600 job postings in New England.

Each potential employer was sent four resumes that were designed to allay suspicions. The group of four always included two men and two women, four different resume templates and four of the eight religious affiliations (one of the seven religions or the control response that did not reference a faith group).

The jobs were in the fields of banking, customer service, finance, hospitality and telecommunications, areas that are known to attract recent college graduates. The falsified former job experiences were at places like Starbucks, with the applicants serving as bank tellers or restaurant wait staff.

The key to the experiment was the inclusion of membership in or leadership of a campus religious group. "Including such religious information on resumes is realistic for recent college graduates because they generally lack extensive work histories and tend to compensate by listing involvement in extracurricular activities," the southern report explained.

A CASE FOR FAITH

Although the results varied by region, both studies supported the researchers' hypothesis: employers resist the entrance of religion into the workplace.

Dubensky believes that the results illustrate how important it is to educate companies about religious practice.

"It's in a company's best interest to address religious diversity," she said. "The best talent does not come in only one shape and size."

Furthermore, Dubensky explained, screening out religious affiliation in the application process does not mean an office will be religion-free. Tanenbaum's 2013 survey on religion in the workplace reported that "roughly one-in-five (22 percent) of workers overall share their religious beliefs with other coworkers occasionally."

Wallace said that the two studies confirmed the researchers' sense that secularization extends to the workplace. Secularization theory, in brief, claims that religious expression is being uncoupled from public life, even if many Americans continue to report involvement in religious communities.

"We are a society that espouses religious freedom and appreciates religious diversity," Wallace said. "(But) in certain areas, it's frowned upon to openly assert your belief. … We simply aren't thinking about G0D in every waking minute of every waking day."

However, Dubensky noted, neither are religious employees.

"Everyday that I go to work, I'm always white, I'm always a woman and I'm always a Jewish person," she said. "Whether (Judaism) is salient, critical or important on a particular day may vary."

By welcoming and nurturing religious diversity, companies can create a safe and healthy workplace for people of all faiths. "They can actually create environments where they will attract and retain the best of the best," Dubensky said.

Wallace believes that there is plenty of work left to do when it comes to understanding religious discrimination in the workplace. But the studies showed a need for applicants passionate about their participation in campus religious groups to go the extra mile in explaining why their resumes include religion.

"Many of the students who put something about religion (on their resumes) are not so much signaling … religious identity," Wallace said. Instead, these students might be showing that they held a position of leadership in the organization.

Matt Warzel, president of MJW Careers, said entry-level job applicants should include involvement in religious groups if it "showcases who they are and impacts what they can do for the company."

Warzel, who advises clients on writing resumes and landing interviews, said that it is important for everything on a resume to be quantified. In other words, employers need to know how an internship or volunteer position will serve them.

For applicants short on job experience, involvement in religious groups can help a recent graduate create a resume based on skills like leadership. "But be sure to include more than one experience under each header," Warzel said.