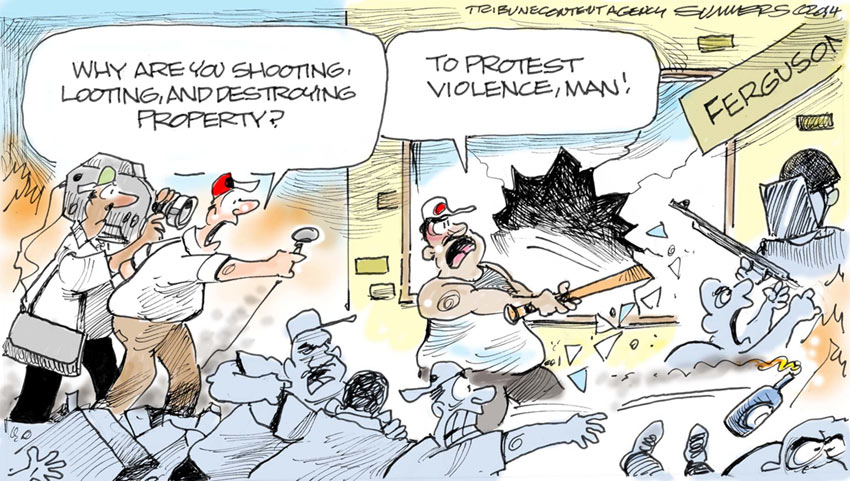 Violence following the recent fatal shooting of an unarmed robbery suspect in , has tragically followed a predictable script.

On average, more than 6,000 African-Americans are killed by gun violence each year. That startling figure is nearly equal to all of the U.S. combat fatalities incurred in both and over some 13 years. African-Americans are the victims in about half of the homicides in America each year despite the fact that blacks represent only about 13 percent of the U.S. population.

One would think that these alarming statistics would provoke the sort of protests that we've seen in , but that is not the case. Nor does racial unrest automatically follow cases in which white police officers fatally shoot black criminal suspects. Only a small handful of such instances trigger outrage in the black community.

Instead, the sort of civil unrest we're seeing in is most likely to be ignited by the infrequent and disparate cases in which someone white, whether a police officer or not, fatally shoots an unarmed African-American.

There is a second theme in such cases. The media almost invariably distorts the facts, sometimes deliberately seeking to incite tensions. In the case, journalists published photos of Martin as a diminutive adolescent, not more recent pictures of Martin as a 17-year old who was much taller than Zimmerman.

Zimmerman was referred to by the as a "white Hispanic" (a term not usually accorded those of mixed ancestry). was accused of airing footage of Zimmerman shortly after his encounter with Martin that concealed the severity of Zimmerman's head injuries. edited a recording of Zimmerman's 911 call to police in a way that suggested Zimmerman was a racist. falsely speculated that Zimmerman may have used the racial slur "coon" during his 911 call.

In the Brown case, the media has rushed to portray the victim as a "gentle giant" who was almost certainly gunned down by a racist, trigger-happy cop. Only days later it was reported that just minutes before his death, the 6-foot-4, 292-pound Brown had allegedly committed a strong-armed robbery, bullying and assaulting a store owner half his size -- and had been almost immediately been stopped not far away for walking down the middle of the road.

A third theme is the entrance of , and the . Almost immediately, they incite tensions by issuing wild, unfounded charges. Jackson said of the Martin shooting that "targeting, arresting, convicting blacks and ultimately killing us is big business." Jackson just called the Brown shooting a "state execution." Sharpton called the legal acquittal of Zimmerman an "atrocity." In the Zimmerman case, the new put a bounty on his head, and in it called for violence against the police.

Fourth, demagogic politicians use these tragedies for political advantage -- usually in ways that only make things worse. Libertarian Sen. , who is eyeing a 2016 presidential run, blamed the police for their overt military appearance and their crowd-control tactics. Yet street violence still persisted days after police in military-style riot gear were pulled from the scene -- until finally there were requests for intervention.

President Obama did not soothe tensions when he claimed that looked like the son he never had, an implication that any president of might have greater sympathy with those who shared a similar appearance. Obama initially weighed in on the Brown case before all the details had emerged, faulting both sides equally for the violence. In 2009, when police arrested professor at his home, Obama blasted the police as racial stereotypers and thereby only spiked tensions.

Eventually, the unrest peaks, then abates, and the country goes back to business as usual -- a little more racially divided as we await the next predictable controversy.

Meanwhile, we might remember that the American experiment to unite various racial and ethnic groups into one culture is as noble as it is rare in history. When it has previously been tried in the modern world -- , , , , , -- it usually had failed spectacularly.

What will save us are not more elite and self-serving "conversations" about racial difference, but a new classically liberal effort to consider race irrelevant in our shared American culture. Perhaps if we started treating people as unique individuals and not as hyphenated and anonymous groups, we could deal with these tragic shootings as individual tragedies rather than collective conspiracies.