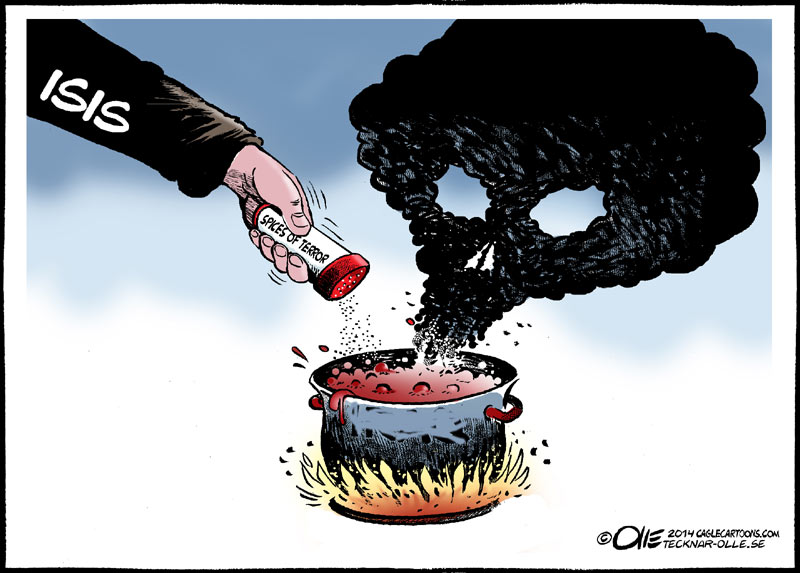 Hamas' war with Israel is not a stand-alone event. It is happening in the context of the vast changes that are casting asunder old patterns of behavior and strategic understandings as actors in the region begin to reassess the threats they face.

Hamas was once funded by Saudi Arabia and enabled by Egypt. Now the regimes of these countries view it as part of a larger axis of Sunni jihad that threatens not only Israel, but them.

The Muslim Brotherhood in Egypt, and its state sponsors Qatar and Turkey, are the key members of this alliance structure. Without their support Hamas would have gone down with the Muslim Brotherhood regime in Egypt last summer. As it stands, all view Hamas' war with Israel as a means of reinstating the Brotherhood to power in that country.

To achieve a Hamas victory, Turkey, Qatar and the Muslim Brotherhood are using Western support for Hamas against Israel. If the US and the EU are able to coerce Egypt and Israel to open their borders with Gaza, then the Western powers will hand the jihadist axis a strategic victory.

The implications of such a victory would be dire.

Hamas is ideologically indistinguishable from Islamic State. Like Islamic State, Hamas has developed mass slaughter and psychological terrorization as the primary tools in its military doctrine. If the US and the EU force Israel and Egypt to open Gaza's borders, they will enable Hamas to achieve strategic and political stability in Gaza. As a consequence, a post-war Gaza will quickly become a local version of Islamic State-controlled Mosul.

In the first instance, such a development will render life in southern Israel too imperiled to sustain. The Western Negev, and perhaps Beersheba, Ashkelon and Ashdod, will become uninhabitable.

Then there is Judea and Samaria. If, as the US demands, Israel allows Gaza to reconnect with Judea and Samaria, in short order Hamas will dominate the areas. Militarily, the transfer of even a few of the thousands of rocket-propelled grenades Hamas has in Gaza will imperil military forces and civilians alike.

IDF armored vehicles and armored civilian buses will be blown to smithereens.

Whereas operating from Gaza, Hamas needed the assistance of the Obama administration and the Federal Aviation Administration to shut down Ben-Gurion Airport, from Judea and Samaria, all Hamas would require are a couple of hand-held mortars.

Jordan will also be directly threatened.

From Egypt's perspective, a Hamas victory in the war with Israel that connects Gaza to Sinai will strengthen the Muslim Brotherhood and its Islamic State and other allies. Such a development represents a critical threat to the regime.

And this brings us to Islamic State itself. It couldn't have grown to its current monstrous proportions without the support of Qatar and Turkey.

Islamic State is obviously interested in expanding its conquests. Since it views itself as a state, its next move must be one that enables it to take over a national economy. The raid on Mosul's central bank will not suffice to finance its operations for very long.

At this point, Islamic State wishes to avoid an all-out confrontation with Iran, so moving into southern Iraq is probably not in the cards.

US forces in Kuwait, and the strength and unity of purpose of the Jordanian military, probably take both kingdoms off Islamic State's chopping block for now.

This leaves Saudi Arabia, or parts of it, as a likely next target for Islamic State expansion.

Islamic State's current operations in Lebanon, which threaten the Saudi-supported regime there, indicate that Lebanon, at a minimum, is also at grave risk.

Then there is Iran. Iran is not a member of the Sunni jihadist axis. But when it comes to Israel and the non-jihadist regimes, it has cooperated with it.

Both in Iraq and Syria, Iran and Islamic State have shown little interest in making one another their primary target. Turkey and Qatar have often served as Iran's supporters in the Sunni world.

This is the context in which Israel is fighting its war with Hamas. And due to this context, two interrelated strategically significant events have occurred since the war began.

The first relates to the US.

The Obama administration's decision to side with the members of the jihadist axis against Israel by adopting their demand to open Gaza's borders with Israel and Egypt has served as the final nail in the coffin of America's strategic credibility among its traditional regional allies.

As the US has stood with Hamas, it has also maintained its pursuit of a nuclear deal with Iran. The US's position in these talks is to enable the mullocracy to follow North Korea's path to a nuclear arsenal.

Finally, President Barack Obama's refusal to date to take offensive action to destroy Islamic State in Iraq and Syria demonstrates to Saudi Arabia and the other Gulf states that under Obama, the US would rather allow Islamic State to expand into their territory and destroy them than return US military forces to Iraq.

In other words, Obama's pro-Hamas-, pro-Iran- and pro-Muslim Brotherhood-axis policies, along with his refusal to date to take effective action in Iraq and Syria to obliterate Islamic State, have convinced the US's traditional allies that for the next two-and-a-half years, not only can they not rely on the US, they cannot discount the possibility of the US taking actions that harm them.

It is in the face of the US's shift of allegiances under Obama that the non-jihadist Sunni regimes have begun to reevaluate their ties to Israel. Until the Obama presidency, the Saudis and Egyptians felt secure in their alliance with the US. Consequently, they never felt it necessary or even desirable to consider Israel as a strategic partner.

Under the US's strategic protection, the traditional Sunni regimes had the luxury of maintaining their support for Palestinian terrorists and rejecting the notion of strategic cooperation with Israel, whether against Iran, al-Qaida or any other common foe.

So sequestered by the US, Israel became convinced that the only way it could enjoy any benefit from its shared strategic interests with its neighbors was by first bowing to the US's long-held obsession with strengthening the PLO. This has involved surrendering land, political legitimacy and money to the terror group still committed to Israel's destruction.

The war with Hamas has changed all of this.

The partnership that has emerged in this war between Israel, Egypt and Saudi Arabia is a direct consequence of Obama's abandonment of the US's traditional allies. Recognizing the threat that Hamas, as a component part of the Sunni jihadist alliance, constitutes for their own regimes, and in the absence of American support for Israel, Egypt and Saudi Arabia have worked with Israel to defeat Hamas and keep Gaza's borders sealed.

Most Israelis have yet to grasp the strategic significance of this emerging alliance. This owes in large part to the Left's domination of the public discourse.

The Israeli Left sees this new partnership. But it fails to understand its basis or significance. For the Left, all developments lead to the same conclusion: Whatever happens, Israel must strengthen the PLO by strengthening Palestinian Authority Chairman and PLO chief Mahmoud Abbas.

Failing to recognize the basis for Israel's emerging strategic partnership, led by Finance Minister Yair Lapid and Justice Minister Tzipi Livni, the Left is advocating using our new ties with Saudi Arabia and Egypt as a means of strengthening Abbas by organizing a regional peace conference.

What they fail to understand is that such a move would destroy the partnership.

Israel's strategic cooperation with Egypt and Saudi Arabia owes to their shared interests. It cannot extend beyond them. And they have no shared interests in regard to the PLO.

Threatened by the axis of jihad, no Muslim government can be seen publicly with Israelis. Asking Egyptian and Saudi leaders to have their pictures taken with Israelis is like asking them to sign their own death warrants.

Moreover, Israel's required end-state in negotiations with the PLO — defensible borders and recognition of its sovereign rights to Jerusalem — is something that no Muslim regime can publicly accept — especially now.

So far from building on our new cooperative relationship, if the government heeds the Left's advice and uses our incipient ties with the Saudis and Egyptians to strengthen the PLO, it will highlight and exacerbate conflicting interests and so destroy the partnership.

Moreover, the fact is that the PLO can play no constructive role for any of the sides in weakening our common foes. As he has for the past decade, during the current war Abbas has demonstrated that he is utterly worthless in the fight against the forces of jihad — both of the Sunni and Shi'ite variety.

At least for the duration of Obama's presidency the interests that Egypt, Saudi Arabia and Israel share in preventing Iran from developing nuclear weapons and defeating the Muslim Brotherhood/Islamic State as military and political threats can only be advanced through joint action.

The Obama administration would have forced Israel to bow to Hamas's demands weeks ago if the Egyptians and Saudis hadn't opposed a Hamas victory.

Without Israeli military action, Iran will become a nuclear power. In light of the US's backing of Iran's nuclear program, such an Israeli operation is effectively impossible without regional support.

As to Islamic State, right now the US is interested in cooperating with Iran in fighting the barbaric force.

In exchange for Iranian cooperation, the US is liable to cede Basra and the Shatt al-Arab to Iran.

Effective cooperation between Israel, the Kurds and the Sunnis could contain, and perhaps defeat, Islamic State while reducing Iran's chances of securing the strategically vital waterway.

Since the emerging partnership between Israel, Egypt and Saudi Arabia is a direct result of the Obama administration's destruction of US strategic credibility, it is fairly clear that if properly managed, it can last until January 2017. Until then, in all likelihood, the US will be unwilling and unable to rebuild its reputation.

And until then, the parties are unlikely to find alternative means of securing their interests that are more effective than joint action.

Given the stakes, and the complementary capabilities of the various parties, Israel's primary task today must be to work quietly and diligently with the Saudis and Egyptians to expand on their joint achievements in Gaza.

The Israeli-Egyptian-Saudi alliance can ensure that all members survive the Obama era. And if lasts into the next administration, it will place all of its members on more secure footing with the US, whether or not a new administration decides to rebuild the US alliance structure in the Middle East.

JWR contributor Caroline B. Glick is the senior Middle East Fellow at the Center for Security Policy in Washington, DC and the deputy managing editor of The Jerusalem Post, where her column appears.