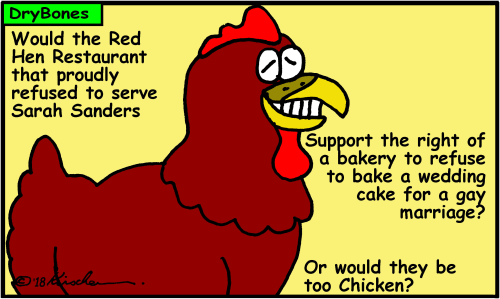 The toxicity of the resistance to President Trump has risen in recent days, with the nation's most respected newspapers publishing rationalizations for denying Trump supporters public accommodation and for doxxing career federal employees, while a journalist found himself under physical attack from the so-called anti-fascist group Antifa, which has stepped up its violent activities since Trump's election.

The justification for denying public accommodation came from The Washington Post in an op-ed by Stephanie Wilkinson, the owner of a farm-to-table restaurant in Lexington, Virginia. Wilkinson became famous in June of last year, when she refused to serve White House spokeswoman Sarah Huckabee Sanders and told Sanders and her family to leave the restaurant.

Wilkinson's staff then followed the Sanders group in protest as they tried to find another place to eat.

Wilkinson later told the press she ejected Sanders because the Trump administration is "inhumane and unethical" and because the Red Hen "has certain standards that I feel it has to uphold, such as honesty, and compassion and cooperation."


In her new column, Wilkinson discussed the case of The Aviary, a trendy bar in Chicago where a waitress recently spat on Eric Trump, the president's son. Wilkinson wrote that the incident, along with her own decision to oust Sanders, shows that in the age of Trump, "new rules apply" in public accommodations: Americans who work for the administration or support the president should stay away.

"If you're directly complicit in spreading hate or perpetuating suffering, maybe you should consider dining at home," Wilkinson wrote.

Wilkinson noted that "no one in the industry condones the physical assault of a patron," but at the same time declared that Americans should understand that a "frustrated person" -- for example, a restaurant employee -- will "lash out at the representatives of an administration that has made its name trashing norms and breaking backs." Americans should accept that such things will happen.

"If you're an unsavory individual," Wilkinson concluded, "we have no legal or moral obligation to do business with you." Better to stay home than risk the spittle. (And, of course, Wilkinson and her colleagues in the hospitality industry will decide who is "unsavory.")

The apology for doxxing came from The New York Times in a piece by Kate Cronin-Furman, an assistant professor of human rights at University College London. The article focused on the treatment of illegal immigrant children in detention centers near the U.S.-Mexico border.

Cronin-Furman discussed the detentions, as well as actions by employees of U.S. Customs and Border Protection, in terms of the Holocaust and genocides in Cambodia and Rwanda. Those are, of course, contexts which most Americans would likely dismiss as preposterous and offensive but which Cronin-Furman and the Times apparently take seriously. Her idea is that opponents of the administration should publicly identify and shame low- and mid-level Customs and Border Protection employees who care for migrant children.

Such workers would be dismayed at being publicly shamed because they are "sensitive to social pressure," Cronin-Furman wrote, "which has been shown to have played a huge role in atrocity commission and desistance in the Holocaust, Rwanda and elsewhere. The campaign to stop the abuses at the border should exploit this sensitivity."

"This is not an argument for doxxing," Cronin-Furman continued. "It's about exposure of their participation in atrocities to audiences whose opinion they care about.

The knowledge, for instance, that when you go to church on Sunday, your entire congregation will have seen you on TV ripping a child out of her father's arms is a serious social cost to bear. The desire to avoid this kind of social shame may be enough to persuade some agents to quit and may hinder the recruitment of replacements.

For those who won't (or can't) quit, it may induce them to treat the vulnerable individuals under their control more humanely.

In Denmark during World War II, for instance, strong social pressure, including from churches, contributed to the refusal of the country to comply with Nazi orders to deport its Jewish citizens."

Needless to say, that was a clear argument for doxxing.

Finally, there was Antifa's recent attack on Andy Ngo, a freelance journalist often associated with the pro-free thought cultural publication Quillette. At a demonstration in Portland, Oregon, at which Trump was a focus of dispute, Antifa fighters beat up and milkshaked Ngo, apparently because he was there and he was not on their side.

The president is not always at the center of such demonstrations, but Antifa has become an angry and violent fringe force in the Resistance. It has played an ugly role in a number of events, most notably Charlottesville, in which feelings about Trump have been central.

Shunning, shaming, doxxing, attacking. As the 2020 campaign reaches full speed, would it surprise anyone to see all of it increase? And all from people who congratulate themselves for standing against hate.

Perhaps our politics will cool down at some point in the future. But not now.