Bashing Trump On The Fourth Of July: A Tank-less Chore 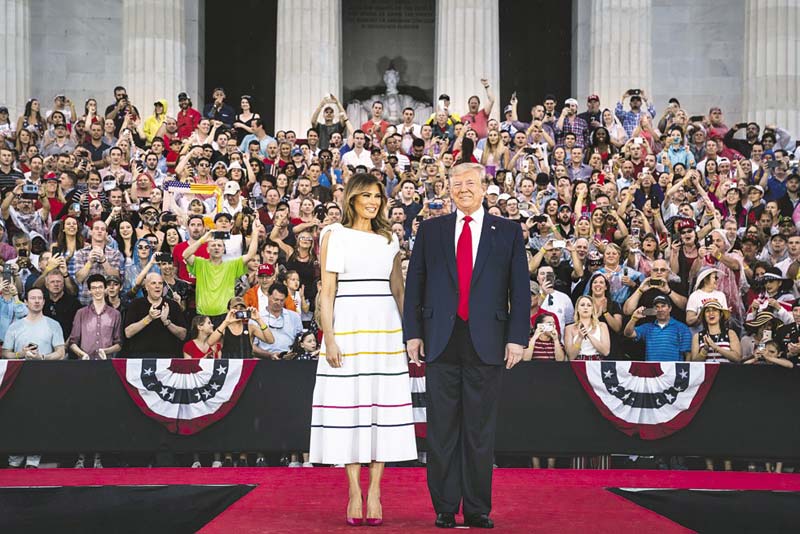 With all due respect to Bob Hope, "tanks" for the memories, America's outrage class, for Fourth of July dramatics that never should have been.

At issue: President Trump's insistence on an Independence Day  "Salute to America" parade in the nation's capital mimicking how the French celebrate Bastille Day (actually, it was more like a display of stationary military hardware, plus a flyover, rather than a traditionally passing by of forces and equipment).

As per usual, the branding of Trump as a wannabe Duce.

Plus, a question of the redirection of government resources.

And, cherry on the sundae: the argument that Trump's honoring of the nation's fighting forces somehow runs counter to American values.

I won't waste your time countering these criticisms — especially the latter point about the military being out of place at a Fourth of July celebration.


This country fought its way to independence; we didn't litigate our way out of the British Empire. Every day, American servicemen and women put their lives on the line around the world protecting and projecting freedom.

What I would like to offer instead is a friendly warning to this President's critics: it's episodes like this that only improve his re-election chances.

For these two reasons.

Hysterics Maybe Won't Be Rewarded. On the Washington outrage scale, what's a typical reaction to a Trump controversy (1 being a shoulder shrug and 10 being a call for impeachment/imprisonment)?

To the left, when Trump's not engaging in criminal conspiracies, he's making a mockery of the Constitution. This is the candidate who wasn't going to concede the 2016 election; now, he's a sitting president who supposedly won't leave the White House if defeated in November 2020.

The problem with resorting to full-throated outrage every time this White House wades into controversy? It's the boy-who-cried-wolf syndrome.

Moreover, feigned outrage cheapens what should be genuine indignation. Or maybe you think a tank parked in the shadow of the Lincoln Memorial is in the same class as migrant children living in cages at the Mexican border.

My suggestion: Democrats need to imitate what Trump did four years ago. If they're going to run on the strategy that outrage will fuel the base to turn out in record numbers, then perhaps it's smarter to a streamline that outrage as opposed to the current scattershot approach (in 2016, Trump directed his bile at Hillary Clinton, rival Republicans, the political ruling class, illegal border crossings and, of course, the media).

But the left whipping itself up in a later over a military celebration? Tanks, but no tanks, voters may say.

Start Embracing America. Every party out of power runs against the status quo — you're worse off than you were four years ago; the country's headed in the wrong direction; this election is the most crucial in the nation's history, etc.

Consider this passage from a recent New York Times video: "America may once have been the greatest but today, America, we're just okay."

The last two Democrats who won the White House — Barack Obama and Bill Clinton — did so by cleverly mixing a criticism of the nation's direction with an insistence that America's brightest days were still ahead. Both gentleman settled on the same word: "hope" (for Obama, a conceptual poster, and for Clinton his Arkansas birthplace).

If you don't think that hope is in short supply among the present Democratic field, image a Fourth of July address in front of the Lincoln Memorial by President Cory Booker — the New Jersey senator who wants reparations for slavery and, speaking of overaction, called actor Jussie Smollett's staged beating "an attempted modern-day lynching."

Whereas Trump recited the deeds of America's military branches over the decades during the celebration on the National Mall, Booker's version of American history would start with slavery, transition to Chinese exclusion, shift over to women's suffrage and swing back to Japanese-American internment camps before ending in a flourish of civil rights, gay rights, non-citizen rights, #metoo and gender neutrality.

Jussie Smollett wouldn't share the stage; Colin Kaepernick and a bevy of woke celebrities and societal "victims" likely would.

This is not to suggest that Trump is without criticism, or that the "parade" felt a little . . . well, manufactured.

Unlike the National Victory Celebration in the summer of 1991, Trump's festivities were not a salute to a recent military triumph (why the Trump campaign doesn't play up the defeat of ISIS a puzzler). Unlike the America of nearly 30 years, there is no Vietnam hangover and pent-up guilt for the rude treatment of veterans.

One other fault with what transpired Thursday in the nation's capital: Trump was not as magnanimous as was George H.W. Bush, given his chance to salute the military.

Before that June day's parade (yes, tanks were on the move back then), Bush ventured over to Arlington National Cemetery to pay his respects to the 376 members of the U.S. armed forces who died during the Gulf War. "War also deserves quiet, sober remembrance, and here in this place we can offer humble homage to young people who last summer answered their country's call and never returned," an emotional 41 said during a memorial ceremony in the cemetery's amphitheater.

Such humility wasn't on display in this year's parade. Nor did the day have the same vibe as in 1991, when Bush 41 referred to "a new and wonderful feeling" — a wave of patriotism and respect for military sweeping the land. Moreover, Bush didn't engage when the loyal opposition engaged in sour grapes about the celebration.

Then again, that "feeling" abandoned the elder George Bush 17 months later, when voters replaced him with Clinton — a bad economy not the stuff of a victory parade.

Will Trump suffer the same fate as Bush 41?

At the time of 1991's National Victory Celebration, Bush's approval rating clocked in at 73% (Gallup had him at 89% four months earlier); Trump's approval runs about 30 points lower.

On the other hand, America's economy slowed and entered a recession in 1991; Trump presently governs amidst a 121-month period of economic expansion.

And . . . there's not a Bill Clinton in the current field of presidential hopefuls.

That is to say: a Democrat of prominence, with an actual shot at the nomination, willing admit that his party has flaws and so politically adroit as to coopt issues from the other side of the aisle (in Clinton's case, he latched on to wealth reform, capital punishment, free trade and middle-class tax breaks).

In the final analysis, that may be this president's trump card. Absent that "new and wonderful feeling", he can fall back on a strong economy and a string of opponents who don't know when to lay off the pessimism.

Even on the Fourth of July.