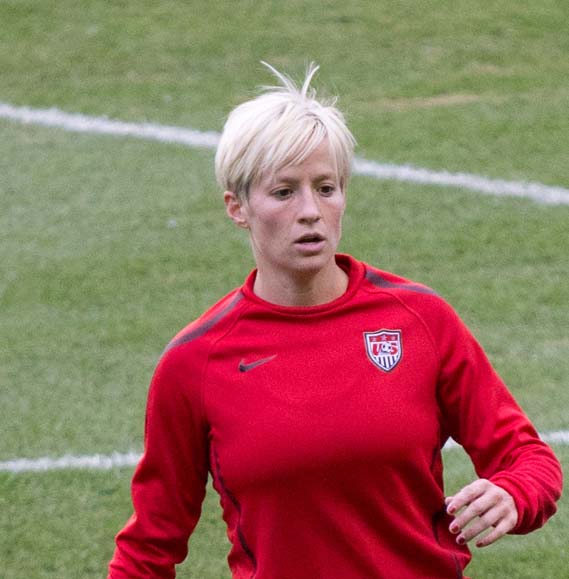 Nike has withdrawn a new Independence Day-themed shoe featuring the Revolutionary War-era flag after former NFL quarterback and Nike-endorser Colin Kaepernick complained that the flag was a symbol of the slave era, according to the Wall Street Journal. Nike offered a lame excuse that it had removed the shoe from retailers because "it featured an old version of the American flag."

In fact, it featured the American flag that was actually in use in 1776 on the original Fourth of July, and it is named for the pioneering Founding Mother to whom its design is commonly attributed, Betsy Ross. As it happens, a version of that very flag was carried into battle by Union troops fighting to (abolish slavery during the Civil War.

Sadly, Kaepernick, who blew up his NFL career by refusing to stand for the national anthem at games, is not alone in his hostility to patriotic symbols.

Megan Rapinoe, the co-captain of the U.S. national women's soccer team, refuses to place her hand over her heart with the rest of her team when the national anthem is played at the World Cup in Lyon, France.

She says she is taking a stand against President Trump -- sending an "F you" to his administration. But she started protesting the anthem in solidarity with Kaepernick in September 2016, before Trump was elected, when she played for the Seattle Reign in the National Women's Soccer League.


Let's be clear: Rapinoe is an amazing athlete. Her heroics in the quarterfinal against France were a wonder to watch. And she has every right to express her displeasure with the Trump administration. Many Americans have legitimate grievances with the president.

But Rapinoe is not playing for the Trump administration; she is playing for the United States. It's one thing for a professional athlete to protest the national anthem, but quite another for a member of Team USA to do it. Rapinoe is protesting the Stars and Stripes while wearing the Stars and Stripes. That's not okay. Representing your country is a privilege, not a right. If she really feels she can't show respect for the U.S. flag and anthem, then she shouldn't wear the U.S. jersey.

Here's the worst part. What she's doing is selfish. Her protest comes at a time when the U.S. women's team has taken an important stand against gender discrimination. They are suing the U.S. Soccer Federation because, despite being more successful on the field than the men's team, and bringing in more revenue, they are paid significantly less than the men. They have a point, and the World Cup is a chance to rally the country behind their cause.

But instead of unifying Americans behind her team's admirable fight for gender equity, Rapinoe is dividing Americans with her anthem protests. Untold numbers of Americans who might have been inspired to support the team's cause have been alienated by its leader.

In 2017, at the height of the NFL anthem protests, polls showed that 64% of Americans said athletes should "be respectful during the national anthem," while just 24% disagreed. Considering that only 42% of Americans approve of Trump, that means there are millions of Americans who, like Rapinoe, don't like the president, but also don't like athletes protesting during the anthem. Why drive these Americans away? How does that help the cause of gender equity in sports? Answer: It doesn't.

Rapinoe has also said that if Team USA wins its fourth World Cup title, "I'm not going to the f -- - White House." Good for her. Lots of athletes have refused White House invitations from Republican and Democratic presidents alike. She has every right to stay home if she wins. But she does not have the right to protest the U.S. national anthem when playing for the U.S. national team.

During the World Cup of Hockey in 2016, U.S. coach John Tortorella announced that "If any of my players sit on the bench for the national anthem, they will sit there the rest of the game." Asked why, Tortorella told ESPN: "It is probably the most disrespectful thing you can do as a U.S. citizen." He noted that "there are men and women that give their lives for their flag," and those who have suffered "traumatic physical injuries, traumatic mental injuries." Their service and sacrifice, Tortorella said, make it possible for athletes to play a game for a living.

He was right. The coaches of Team USA should deliver a similar message to Rapinoe before Sunday's final.