The reason the debt is so high? The US is at war --- with itself 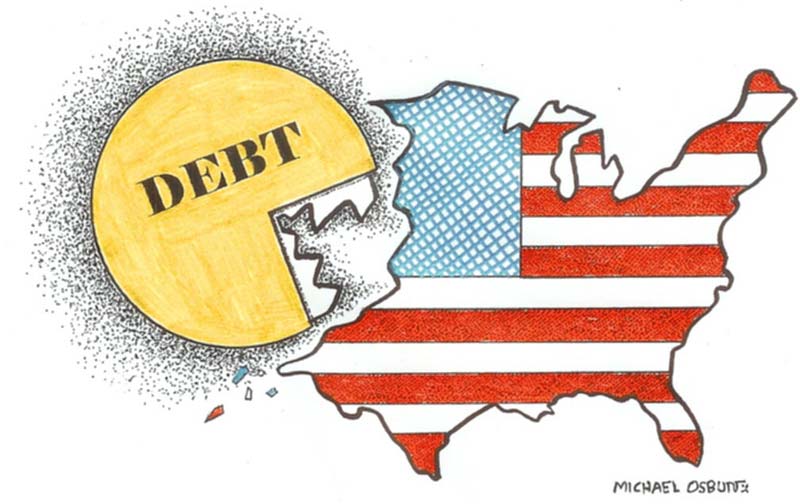 Represented as a line graph, historical statistics on the public debt of the United States look like a jagged mountain range.

There are peaks where the debt grew to pay for each of the nation's wars or international conflicts, from the fight for independence to the late Cold War arms race under President Ronald Reagan.

The subsequent peace dividends appear as debt-decline valleys. Major increases also occur during the Great Depression of the 1930s and the Great Recession of 2008-2009.

What accounts for the current ramp-up in the debt, at a time of relative peace and steady if unspectacular economic expansion? On June 25 the Congressional Budget Office reported that, under the most politically realistic forecast, the debt will hit 105 percent of gross domestic product by 2029, a level not seen since World War II.

Obviously, federal spending exceeds revenue, as it has every fiscal year since 2002. On a deeper level, though, the explanation is that the United States is at war - with itself. It is manifestly not a shooting war such as the one between 1861 and 1865, which drove the federal debt to a then-record of just over 30 percent of GDP.

Yet polarized and mutually distrustful Republicans and Democrats are engaged in a Cold Civil War, and have been for years, even before the Trump presidency. The impasse has rendered impossible the compromises and trade-offs - tax increases and spending cuts, or some combination thereof - needed to adjust the existing array of government programs to modern priorities, and to available national resources. Two such deals in centrism's last heyday, the 1990s, helped create a balanced budget from fiscal 1998 through fiscal 2001, the first and only ones of the past half-century.

In more recent years, however, politicians keep the government more or less going via short-term deals (usually increasing outlays on existing programs and priorities) and borrowing, borrowing, borrowing - to the tune of 42 out of every 1,000 dollars the U.S. economy will produce in the current fiscal year, according to the CBO.

Who fired the first shot? Certainly Republicans have demanded tax cuts and Democrats have protected every dollar of Medicare and Social Security, with near-equal ferocity.

At the moment, however, Republicans seem especially blameworthy; following President Donald Trump's lead, they used their 2017-2018 majority in Congress to cut taxes by $1.5 trillion over the next decade, while boosting defense spending and abandoning their supposed interest in entitlement reform.

Republicans claimed, as usual, that tax cuts would produce enough new economic growth to offset increased debt. The CBO says that hasn't happened and probably won't, but the combination of higher spending and lower taxes over the past year has goosed the economy, so Americans aren't inclined to worry about deficits.

A January Pew Research Center survey found that 48 percent of Americans said reducing the federal deficit should be a top policy priority, down from 72 percent in 2013, at the start of President Barack Obama's second term. The decline was slightly greater among Republicans.

No wonder the Democratic candidates to replace Trump feel justified in proposing huge new tax increases and huge new programs on which to spend them, ignoring deficit reduction. CBO's latest deficit projections did not even come up at their debates last week.

The "budget constraint" - economic jargon for the need to fit spending priorities within limited resources - has become a non-factor in American government and politics. Unless and until some outside force reimposes it, the budget constraint may not come back.

Once upon a time, fear of "bond market vigilantes," who might stop buying Uncle Sam's IOUs without crippling interest-rate hikes, kept tax-cutters and free-spenders in check.

The CBO report duly warns that the nation's debt path may "increase the risk of a . . . situation in which the interest rate on federal debt rises abruptly because investors have lost confidence in the U.S. government's fiscal position."

Current reality, though, is that the global financial markets are swimming in savings and that foreign investors are eager to buy Treasurys, seeing them as a less risky alternative to other investments, according to a June 13 Wall Street Journal report.

Foreign holdings of U.S. debt have grown from $1 trillion to $6 trillion over the past two decades, even though purchases by the biggest holders, Japan and China, have started to level off.

Maybe the United States now exports financial safety the way other countries export cars. Wealthy people in emerging markets get their BMWs from Germany - and their "money good" promises-to-pay from the Treasury Department. If we can get away with funding our government this way, why not?

A less upbeat interpretation, however, is that foreign financing is enabling the United States to indulge its penchant for dysfunctional political warfare, leaving the federal government committed to old, suboptimal policies and, over time, undermining the stability and rule of law that make this country a financial haven in the first place.