The census belongs to the president. He needs to get it back. Here's how 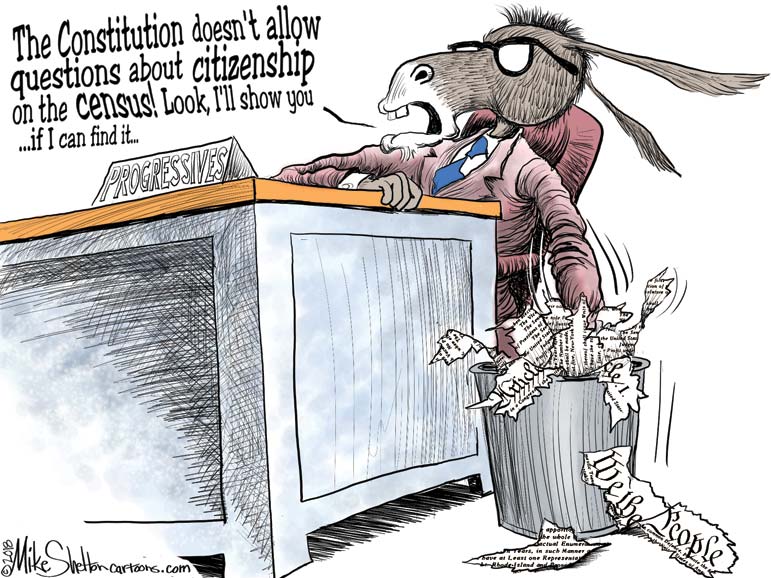 Cheered by the clear victory for the Constitution in this week's redistricting case, I did not spend much time grieving a single question stricken about citizenship from the census survey.

Until, that is, the "senior man in the area" when it comes to the defense of the Constitution - one no longer bound up by robes and thus free to explain to me the decisive moment the census question presents - former federal judge J. Michael Luttig, sounded an alarm.

A former judge on the U.S. Court of Appeals for the 4th Circuit, Luttig sounded the klaxon about that single question being remanded by the Supreme Court for further proceedings in the district court, proceedings that could be mooted with quick action by the president, the attorney general, the commerce secretary and possibly Secretary of State Mike Pompeo.

In a back-and-forth with me via email, Luttig wrote, "This constitutional moment is, in principle, for the Article II Executive, what it would be, in principle, for the Article I Legislature, were the President himself to draft legislation declaring war on behalf of the United States, purport to enact it and sign it into law, and immediately thereafter commit the United States to war through the launch of inter-continental ballistic warheads."

So it is not merely "a single question on the 2020 census" decision. It is the question: To which branch does the Constitution commit which powers? Get that wrong, and the walls of separation are down, the checks don't balance. It's open season, one branch upon the other.

The census belonged to the president. Until this past Thursday it did. He needs to get it back.

The chief justice and the four "liberals" on the court did not bar the door to such questions on the census. The chief justice's controlling opinion in fact suggests that the court need not agree with the executive's rationale for such questions to defer to their inclusion in the census, only that a majority of the court cannot actively disbelieve the factual basis of the rationale offered.

The commerce secretary has a robust power to direct the makeup of the census, the chief justice notes, and the right to add the question. He must merely not contradict himself and the record in explaining, however briefly and brusquely, his reasons for doing so.

The way forward is thus both obvious and urgent: President Donald Trump, Attorney General William Barr, Commerce Secretary Wilbur Ross and Pompeo ought to have a meeting when the president returns from the Group of 20 summit, and decide if such questions are necessary and, if so, why.

If yes, then Barr should commit the conclusions to writing and prepare an executive order for the president's signature directing the commerce secretary to add any such questions, and be prepared to defend the questions on the grounds discussed in the meeting. Nothing more is required.

Whatever the motives of the secretary in the past, there are now new, obvious, compelling arguments for not one but at least three questions in the census on citizenship and immigration status.

Given this week's Democratic debates, which included near-unanimous agreement about extending Medicare to all (it is currently open only to of-age legal immigrants of five years legal residence), new questions on the census are actually compelled by the congressional budgeting process.

The only Democratic debate participant to dissent from the proposed massive expansion of Medicare to legal residents not here five years or longer and to immigrants who are residing here without the permission of the federal government was former Maryland congressman John Delaney. He was my radio guest on Friday morning.

"What would Medicare-for-all cost?" I asked him.

"Wow" was my studied response

"I know," the former congressman added. "It kind of takes your breath away a little bit, doesn't it?"

It does, and it also underscores that if Congress is going to legislate this sort of expansion for a vast new group of immigrants, both legally resident but here less than five years and those without permission, Congress - and specifically the Congressional Budget Office - is going to need to know exactly how much the marginal cost of such expansions might be.

These are factual inquiries, but they depend on data as to the size of the population to be covered. Congress might well reject a plan to include recent immigrants, legal or illegal, if the price tag is clear.

The obvious, compelling need for such a data set is of the sort that will quickly persuade the chief justice and perhaps every justice who watched any or all of the debates this week of the necessity of these questions. And if included in the census form via the direct, transparent process described above, the concerns about the past mixed, and apparently contradictory, motives of the commerce secretary will be mooted.

If Pompeo participated in this conversation and affirms what I suspect to be true - that hard data on the number of people who have entered the country illegally, via a border crossing or an overstay of a visa, and of their country of origin, would be of vital importance in negotiations with foreign governments over their response to the crisis at our border and the security threat posed by visa overstays - the constitutional argument for the president's authority to mandate the questions becomes impregnable.

So one big win for the Constitution this week, and one road map provided on how the executive branch must act if it is to retain the enormous deference on the census it is owed by the Constitution.

Within months, the conservative critique of the court on this account could vanish, even as the vindication of the framers' design on legislative districting sinks in.