It all seemed clear after that Harris-Biden moment in Miami. Today, things look muddier 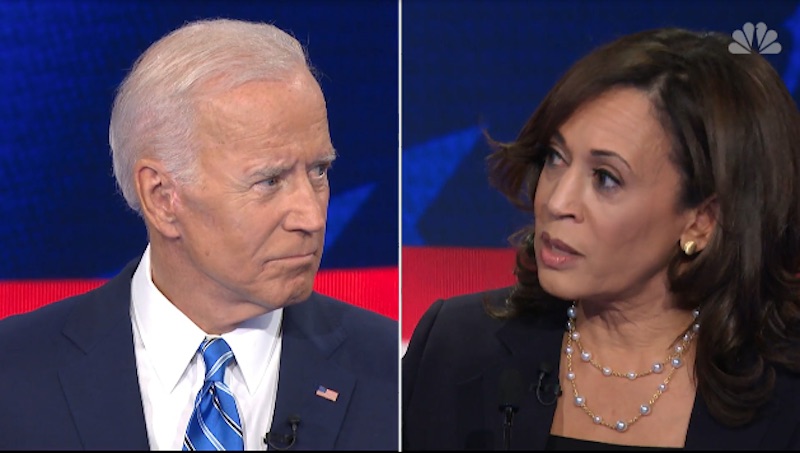 In the moment and in the hours after, it was must-see TV: a clash between a rising black female senator and a former vice president. Kamala Harris won the Democratic debate encounter with Joe Biden and left Miami on a wave of positive reviews. But today, things look a little more complicated.

What happened that Thursday night in Miami is an example of how politics operates today. As President Donald Trump has shown again and again, performance and showmanship matter. Every moment can become magnified, but only a few things stick for very long, especially when the questioning starts. Was the Democratic nomination battle fundamentally changed by the first debate? We'll see.

Several polls suggest the answer is yes, that Harris' confrontation with Biden over his past opposition to mandatory school busing and his comments about working cooperatively with segregationist senators a generation ago gave her a bounce big enough to make her Biden's chief rival for the party's presidential nomination.

A recent survey by The Washington Post and ABC News offers a somewhat different perspective - a judgment by Democrats that the senator from California was the standout performer in the debate but that she still trailed Biden and Sen. Bernie Sanders, I-Vt., and tied with Sen. Elizabeth Warren, D-Mass.

Biden was hurt by what transpired in Miami. He might still have more overall support than any other Democrat, but his performance has prompted questions about whether he is fully ready for the campaign ahead. Harris certainly gained something from her exchange with Biden, but it was not cost free.

The Biden and Harris camps have spent some of the past 10 days squabbling with one another about the meaning of Miami.

In the debate, Harris talked about herself as a beneficiary of school busing as a child and attacked Biden's past position. She has since made clear that, while she believes busing should be available as a tool for local school districts dealing with issues of integration, she does not favor busing mandated by the federal government.

To which the Biden forces ask: Well then, why was she criticizing the former vice president for opposing mandatory busing in his state of Delaware back in the early 1970s when he was a young senator? What was that attack about if the two currently share the same position on mandated busing? To which the Harris camp responds: The real issue is whether Biden regrets "working with segregationists against busing in the 1970s." Does he have any regrets about the position he took then?

Biden's campaign has tried to turn the war of words to the question of whether Harris has consistent positions on this and other issues, seeking to portray her as opportunistic rather than principled.

It points also to her position on the question of eliminating private insurance as part of a Medicare-for-all health-care system. Harris has been criticized for appearing to take both sides on that question at different times during the campaign.

During the debate she raised her hands in answer to a question about giving up private insurance, but there was confusion because of the wording of a question.

Her support for Medicare-for-all means that, eventually, private insurance could be eliminated. But she says she would accept some supplemental insurance under a government-run system.

Harris was pressed on that issue immediately after the Miami debate, and the Biden campaign eagerly sought to amplify the charge that she was changing her position.

That prompted the Harris campaign to point to Biden's recent shift on one aspect of the abortion debate. The former vice president long supported the Hyde Amendment (which prohibits the use of public funds for abortion). Now, he says he would support its repeal.

Harris's moment in Miami was well-planned and well-executed against the top Democrat in the field.

Biden told CNN's Chris Cuomo he was prepared to be a target but was not prepared for Harris to be the one who hit him hardest. "She knew [my late son] Beau," he told Cuomo. "She knows me."

So, Harris threw him off balance and he responded ineffectively, resulting in an exchange that has plunged the Democrats into a discussion about race and busing that few would have anticipated. If there was to be a discussion about race among the Democrats, presumably it would have been focused on criticizing Trump's record and rhetoric. Instead, Democrats are in a family fight.

The conversation about race highlights the changing terrain of a new Democratic Party. Biden argues that his overall civil rights record of 40 years is one of which he is justly proud. His support among older African Americans - including some politicians who rose from the civil rights movement - is testament to how he is viewed by many in the black community. That's the traditional view of the party, shared by many.

Harris is the embodiment of a new generation of Democrats, especially those of color, who see the world differently than those of Biden's generation and will judge him through a different lens. To them, his position on busing in the 1970s was wrong, and on the wrong side of history, regardless of what people think about the use of busing in school districts today.

The Miami debate was much more than the Harris vs. Biden exchange, and other candidates have sought to take advantage of, or recoup from, what happened. Warren continues to chart her own path and is tightly focused. Sanders is Sanders, little changed from 2016 and determined.

Like Harris, Julian Castro, the former secretary of housing and urban development, got a boost in attention after challenging former congressman Beto O'Rourke on immigration. South Bend, Ind., Mayor Pete Buttigieg has shown he can raise big money and hopes to turn that into more support.

The Democratic candidates are mostly watching one another, but the two nights of debate highlighted potential general election vulnerabilities for a party that has pushed leftward since Biden and former president Barack Obama left the White House. Trump and the Republicans have seized on the collective positioning of the Democratic presidential field as revealed in the debate: in favor of providing health care to undocumented immigrants; mostly in favor of decriminalization of the borders; and in a serious argument about the future of private or employer-based health insurance as part of a government-run health-care system. The Democrats will be back on the debate stage in a few weeks, this time in Detroit, to answer more questions about those and other issues. There will be some unfinished business from Miami with which to deal, especially if Harris and Biden are again onstage together. Even if they aren't, both will find the lights hotter than in Miami.