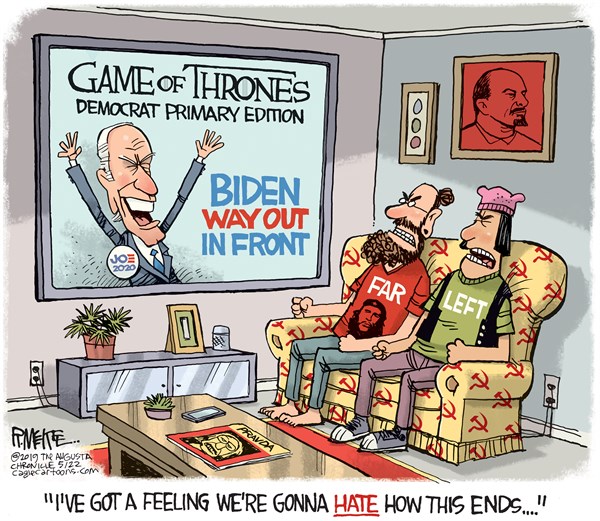 Former vice president Joe Biden leads his Democratic rivals in the campaign to win the party's presidential nomination, continuing to show broad support despite coming under sharp attack from Sen. Kamala Harris of California and others in last week's debate in Miami, according to a Washington Post-ABC News survey.

Democrats judge Harris as the standout performer among the 20 candidates who debated over two nights, but she ranks behind Biden and Sen. Bernie Sanders, I-Vt., in preferences for a nominee to challenge President Trump in the 2020 general election.

Biden is the leader among Democrats in two separate measures, the first when those surveyed were asked to volunteer the name of a candidate they would support at this point as well as in a more traditional question that identifies the list of those running and asks respondents to select from among them. The former vice president's position is buoyed by perceptions that he is the most electable Democrat in a general election and by his support among African American and older Democrats.

When asked to identify their preferred candidate, without being prompted with a list of names, Biden is cited by 21 percent of Democrats and Democratic-leaning independents, a gain of eight points since late April. Sanders runs second at 13 percent, up four points since April. Harris and Sen. Elizabeth Warren of Massachusetts are tied at 7 percent, both up three points.

Among the others, only South Bend, Indiana, Mayor Buttigieg, named by 3 percent, gets above 1 percent in this ranking. Meanwhile, 41 percent of Democrats did not volunteer a preferred candidate, down from 54 percent in April.

When presented with the names of 22 Democrats running for the nomination, Biden is slightly favored by 29 percent to Sanders's 23 percent. Harris and Warren are again tied, at 11 percent. Buttigieg runs fifth, with 4 percent, and is tied with former housing secretary JuliĂˇn Castro, who staked out a position calling for decriminalization of the border that framed the discussion of the immigration issue in both debates.

When second-choice preferences are added to first-choice selections, Biden remains atop the field, with 50 percent of Democrats saying he is either their first or second choice. Sanders stands at 40 percent in the combined ranking, followed by Warren at 25 percent and Harris at 24 percent.

The Post-ABC survey shows a clear stratification of the large Democratic field, based on a combination of first and second choices. In that grouping, four candidates - Biden, Sanders, Warren and Harris - are chosen by at least 20 percent as the first or second choice of Democrats and Democratic-leaning independents.

The event in Miami was the first time Americans could see nearly the entire Democratic field onstage together, albeit split over two nights. Harris's attack on Biden over his past position on school busing and his comments about working in the Senate with segregationist senators provided the most electric moment of either night and gave the campaign of the senator from California a jolt of energy in the aftermath.

Biden in recent days sought to recoup from his performance in Miami, where he was also challenged to yield to a younger generation and struggled at other times. During an event before the Rev. Jesse Jackson's Rainbow PUSH organization in Chicago on Friday, Biden offered a vigorous defense of his overall civil rights record of more than four decades while arguing that the nomination battle should not be about the past.

Other national polls taken after the debate show Biden with a more tenuous advantage. A CNN poll released Monday showed him with 22 percent of Democratic-leaning voters' support, closely followed by 17 percent who backed Harris, 15 percent for Warren and 14 percent for Sanders. The survey found Biden's support had fallen 10 points since May, while Harris gained nine points. A Quinnipiac University poll showed similar overall results.

The Post-ABC poll underscores what has been the case from the time Biden entered the race in April: While he is the leader in the Democratic field, he is by no means a commanding front-runner. There are also signs in the poll that those who watched either of the two nights of debating came away with impressions of the candidates that were different from those Democrats who watched neither night.

Health care stands out as a key issue for Democrats, with 29 percent saying it's one of the most important factors in their 2020 general election vote. But climate change (25 percent), immigration (24 percent) and gun violence (23 percent) also rank highly.

Meanwhile, 20 percent of Democratic-leaning adults say issues of special concern to women are a top issue, with 18 percent apiece saying the same of the economy and abortion. Fewer say foreign policy (12 percent) and taxes (10 percent) are an important factor.

One fault line among the candidates during the debates came over the issue of whether the party should replace the Affordable Care Act enacted during the administration of former president Barack Obama with a government-run health system like Medicare.

The new survey finds strong support among Democrats for a government-run plan, with about 3 in 4 saying that is their preference. Two in 3 Democrats say they would support such a system even if it meant an end to private insurance.

Sanders long has advocated moving to a Medicare-for-all system and has been joined by others in the field. But Biden and other more moderate candidates have resisted embracing Medicare-for-all, preferring to add a public option to the Affordable Care Act instead. Interestingly, Sanders and Biden rank first and second as the candidates most trusted to deal with the issue of health care.

Warren has staked her candidacy in part by issuing a flurry of policy initiatives. She and Sanders are tied on the question of which candidate has the most new ideas (27 percent each), with 26 percent saying the same of Harris. Biden, Buttigieg and Castro follow those three.

The competition for the Democratic nomination remains fluid.

Biden's biggest advantage is on the question of who can beat Trump in the general election. Forty-five percent of Democrats and Democratic-leaning independents name Biden as the candidate best positioned to do that. Sanders runs a distant second at 18 percent, followed by Harris at 9 percent and Warren at 7 percent. No other candidate gets above 2 percent on the electability question.

Whatever Biden's standing overall, his debate performance did not impress Democrats as much as did that of two other candidates. Harris was the standout, with 41 percent saying she did an especially good job in Miami. Next is Warren, at 26 percent. Biden, meanwhile, is cited by 21 percent, Sanders by 19 percent, Buttigieg by 13 percent, Castro by 12 percent and Sen. Cory Booker of New Jersey by 10 percent.

African Americans are the most loyal constituency in the Democratic Party and a key to the nomination contest. Currently, Biden maintains a plurality advantage, supported by about 41 percent of black Democrats. Sanders runs second at 23 percent, followed by Harris with 11 percent. Warren trails significantly with this voting bloc, with just 4 percent support, the same as Booker.

Given the current discussion about busing and race that swelled during the debate, the preferences among black Democrats will be closely watched, as Harris and other Biden rivals attempt to cut into the advantage he currently enjoys.

Although moderate and conservative Democrats make up a larger share of the party overall, liberals have made up the majority of Democratic voters in past primaries and caucuses. There is spirited competition for their support.

This Washington Post-ABC News poll was conducted by telephone from June 28 through July 1 among a random national sample of 1,008 adults, with 65 percent reached on cellphones and 35 percent on landlines. The margin of sampling error among the sample of 460 Democrats and Democratic-leaning independents is plus or minus 5.5 percentage points.