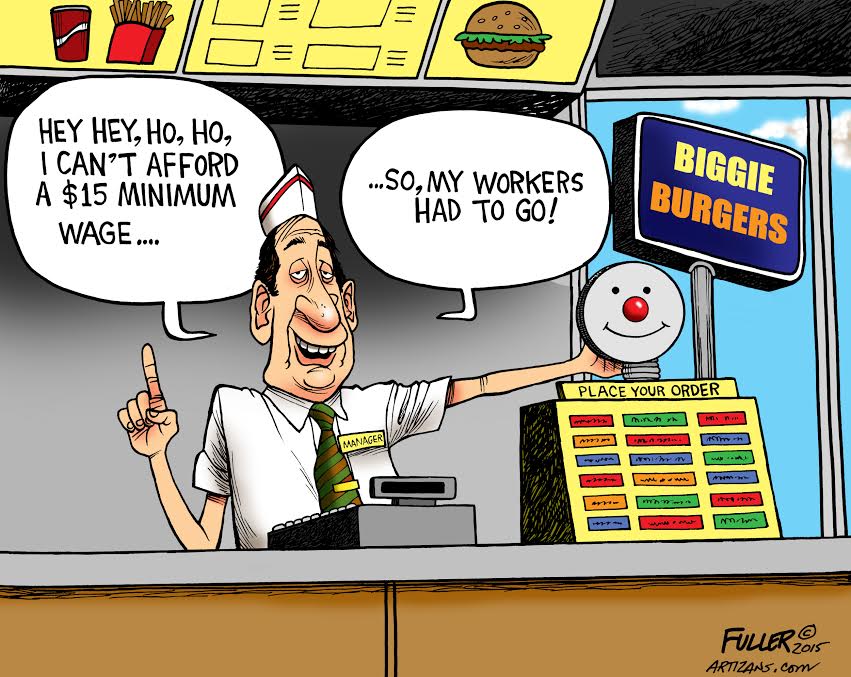 Promising you things is what politicians do. It's how they get elected. "A chicken in every pot! A car in every garage!" That slogan helped send to the .

A year later, we had the Great Depression. People not only didn't get chickens, they lost their pots.

So when congresswoman throws out the idea of a $20-an-hour minimum wage, she's merely doing what politicians do. And naturally, many people cheered. Hey, if you're making $8 an hour now, $20 sounds great -- especially if your employer has to give it to you, whether your work merits it or not.

got lots of headlines. And maybe that was the point. But while raising people out of poverty should be a top priority, getting folks excited about a $20-an-hour minimum wage is not only irresponsible, it's not well thought out. And since we are encouraging our leaders, especially our President, to be more thoughtful before declaring things, let's consider the following:

You can force businesses to raise wages, but you can't force them to keep workers. And study after study, expert after expert, shows that, eventually, the higher the wages demanded, the fewer positions there will be.

Follow this to its logical conclusion, and at a certain point, if a business can't afford to pay the minimum salary to the minimum workers it needs, it closes.

In which case, even more jobs are lost.

THE RUB WITH THE RAISE

With that in mind, let's skip the headline-grabbing sound bites and look at some facts.

In , which is moving towards a $15 minimum wage by 2021, a study conducted by the last year showed employers were already reducing hours, with a net effect of reducing low-wage employees' earnings by $84 a month.

Take note: Higher minimum wage can turn to fewer hours, which turns to less money. It's an important equation to keep in mind.

Meanwhile, the found that a $15 minimum wage would pull 1.3 million workers out of poverty, but at the cost of between 1.3 million and 3.7 million jobs.

You don't need a degree to see that's a bad tradeoff. Up to three jobs lost for every one person pulled out of poverty?

According to the , the CBO also concluded that the Raise the Wage Act, the Democratic bill that just passed through the -- which would raise federal minimum wage to $15 an hour by 2025 -- would actually "reduce real family income by $9 billion" once it was phased in.

SO WE'D GO BACKWARDS? BY 9 BILLION?

These are but a few examples of real-world studies that show the difference between a rousing "Let's get paid!" and how it actually plays out. And these examples are for $15 an hour. Can you imagine if it was suddenly raised another 30%, to $20 an hour?

Do the math. At $20 an hour, a 40-hour work week would cost employers about $42,000 a year. Most people, I think, would say that's high for certain minimum wage jobs -- especially in small towns. All work is important, but if every entry level or support position pays a $42,000 salary, how long do you think people with more experience and more complicated jobs are going to stand for making close to the minimum wage?

Everything will go up. And as we've already seen, as workers' salaries goes up, businesses have three choices: raise prices, lose workers or close shop.

Now, it may be popular to say "just take it out of the obscene profits the business owners are making." But again, this is headline-grabbing, class warfare stuff.

The truth is, 98% of American businesses are companies with fewer than 100 people, according to the . About half of American workers are employed by small businesses.

These are not businesses where the owner flies private jets and golfs around the world. They are restaurants, car repair shops, lawn services, carpet installers. They are the local food market, the neighborhood clothing store, the bowling alley.

Owners of small businesses are often just trying to stay above water, much like their workers. They frequently have thin profit margins. They take out credit lines to stay afloat.

If you suddenly increase parts of their payroll by 100%, or, at $20 an hour, 150%, you likely devastate them. They'll cut hours. They'll lose workers. Or they'll throw in the towel.

"Ah," the critics will scream, "but what about the Amazons and McDonald's of the world? They can afford it!" Perhaps they can. But they won't want to. Their mandate is to keep earnings high to keep stock prices high.

So what will they do? How about investing in technology that will never demand a raise? There's a reason why McDonald's is moving towards robots behind the counter. Why Amazon is exploring drones. Why is experimenting with lockers, where you buy online and pick up by tapping a locker door -- no human interaction required.

And we haven't even mentioned how much those pizzas and french fries will cost with massive minimum wage increases. It's basic economics. Higher costs lead to higher prices. And if the alternatives -- the local mom and pop hamburger joint -- have gone out of business, what's your choice going to be?

ONE SIZE DOESN'T FIT ALL

Now, none of this means we shouldn't increase the federal minimum wage, which hasn't moved since 2009 and currently stands at $7.25. That should absolutely be higher. But in many places it already is. More than half of the states in this country have minimum wages above the federal level. (In Michigan it's $9.45 an hour.) And remember, it's "minimum" wage, meaning the least you can pay someone. Many places start entry-level people at more than that.

Why do you think that happened without a federal push? Because pay levels reflect many things, including supply and demand, and the cost of living in certain areas.

The truth is, it doesn't cost the same to live in as it does in rural . And salaries aren't close to the same. So why should an artificially high federal wage be like a stretchy sock, one size fits all?

Local manipulation of the minimum wage makes more sense. But it won't get you national headlines. A slow introduction of gradual increases would mean less roil for the economy, but it's not as news-making as saying, "We want it now!"

So the House passed the Raise the Wage Act. It made news. But the won't take it up. The has said it's against it.

Which means, for now, the move was merely symbolic, like Tlaib's call for $20 an hour. It might sound good. It might make us feel good. But we'd be better off living in the real world.