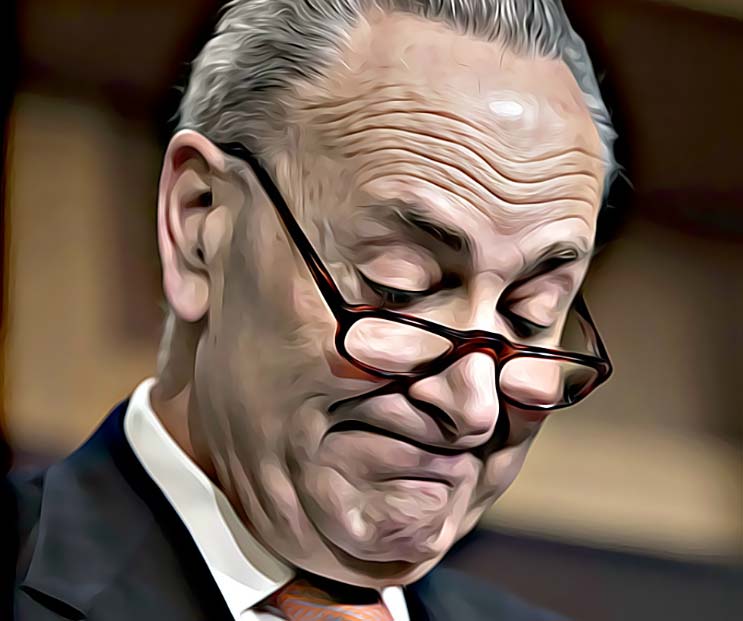 WASHINGTON - The top Democrat in the Senate has vowed to fight President Donald Trump's Supreme Court nominee with everything he's got. Just don't expect him to crack down on his red-state Democrats who go rogue and back Judge Brett Kavanaugh.

"Punishment is not how this place works," Senate Minority Leader Charles Schumer, N.Y., said in an interview this week.

Schumer is trying to stay upright on a nearly impossible political balance beam he has wobbled across throughout Trump's presidency, caught between his party's demanding left flank and centrist Democrats whose survival in November's midterm elections will decide the Senate majority. No other congressional leader has experienced dueling pressures so acutely.

Although anger against Trump has reached a fever pitch in the Democratic Party and activists are clamoring for all-out war against Kavanaugh, Schumer has opted not to use hardball tactics to pressure moderates from Republican states to join the resistance.

The strategy reflects the pragmatic instincts of the 67-year-old Brooklyn politician, who 12 years ago helped sweep the party into power by recruiting and propelling several red-state Democrats to victory. But the decision also exposes him to a possible backlash from the liberal base if the Senate confirms Kavanaugh.

"He's always mindful of not only the Democratic Caucus position, but the impact it has on individual members. And of course, the highest priority are those that are up for reelection in tough states," said Illinois Sen. Richard Durbin, Schumer's top deputy.

While Schumer has won widespread respect from his caucus, there is a collective sense that there is little he can do to twist arms on major votes such as a Supreme Court nomination.

Just how much influence does Schumer have over North Dakota Sen. Heidi Heitkamp's decisions?

"None," said Heitkamp, who last year backed Trump's choice of Justice Neil Gorsuch and faces reelection in a state the president won in 2016 by 36 percentage points.

Schumer's caucus includes potential presidential candidates like New Jersey Sen. Cory Booker , who says Kavanaugh supporters are complicit in "evil," and West Virginia Sen. Joe Manchin, who says it is "extremely disrespectful" for senators not to at least meet with the nominee.

Tensions were evident in a leadership meeting this week, Schumer recalled, when a moderate senator clashed with a liberal lawmaker over whether to summon the translator from Trump's recent meeting with the Russian President Vladimir Putin to Capitol Hill.

The Kavanaugh fight is a potential defining battle for Schumer, after an up-and-down 18 months. The Democratic leader, who boasts of knowing the personal phone numbers of his caucus by heart, held them together last year against the failed GOP push to repeal the Affordable Care Act and the successful Republican revamp of tax laws. But divisions this year over a banking bill and the confirmation of Gina Haspel to head the CIA left a bitter taste in the mouths of some Democrats.

Moments after Trump announced his pick, Schumer was at the forefront of the Kavanaugh resistance. "I will oppose Judge Kavanaugh's nomination with everything I have, and I hope a bipartisan majority will do the same," he tweeted on July 9.

Since then, he has tempered expectations for defeating the nominee. Republicans hold a razor-thin 51-49 majority, with one absent as Sen. John McCain remains in Arizona battling brain cancer, and Kavanaugh needs only a simple majority to take a seat on the high court.

Not only does Schumer need to unite all Democratic senators against Kavanaugh to defeat him; he needs a Republican to cross over and join them.

"Look, it's an uphill fight, but I think we have a chance," Schumer said in the interview, sitting in his office steps from the Senate chamber.

He has pressed the Democratic argument that the Senate should see the extensive writings and documents of the nominee, sending a letter to former President George W. Bush on Friday with the request for Kavanaugh's White House-years material. Republicans have accused the Democrats of delaying the inevitable with their demands.

Schumer has told his caucus he does not want to meet with Kavanaugh now, as he seeks an agreement with the GOP for documents from Kavanaugh's past. "Most of the caucus has gone along and maybe one or two haven't," said Schumer. "That's fine."

Manchin plans to meet with Kavanaugh next week. Indiana Sen. Joe Donnelly, another Democrat facing a tough reelection fight in a Trump-friendly state, plans to do so in August. Both have voiced openness to voting for him.

"He's trying to make sure that as he leads, he doesn't try to dictate. In any legislative body, that's a challenge," Sen. Robert Casey, D-Pa., said of Schumer.

Some party activists prefer to see a more unified front against Kavanaugh who, if confirmed, would replace Justice Anthony Kennedy and move the court farther right for a generation.

"Senate Democrats should publicly declare that they have lined up 49 votes against Kavanaugh as quickly as possible so that they can shift into a full-court pressure campaign against their vulnerable Republican colleagues," Adam Jentleson of Democracy Forward wrote in a recent Washington Post op-ed.

Schumer summed up his message to the red-state Democrats this way: "Let's see who this nominee is and let's see where he stands on these important issues." Schumer has raised concerns that Kavanaugh could vote to roll back health-care and abortion rights, and has too broad a view of the presidency.

There are no major signs so far that a Republican senator will break ranks and oppose Kavanaugh, leaving Schumer to contemplate the prospect that he will fall short of stopping him.

He sounds confident that he will not absorb much blame in that scenario.

"Everyone knows we're not in charge," said Schumer. "People want to see that you've made the fight and done it in a smart way."

After the retirement of Nevada's Harry Reid, Schumer ascended to the top of the Senate Democratic ladder in 2017. But Trump's surprise 2016 win and the downballot Republican success meant he would spend at least two years in the minority.


At first, Schumer voiced openness to working with Trump on infrastructure. Later, he was heard boasting on a hot microphone that Trump liked him.

Trump's controversies mounted and party leaders faced pressure to aggressively resist his agenda. Schumer pushed for concessions on immigration in a spending debate, leading to a brief government shutdown in January that created frustration at both ends of the Democratic spectrum.

Some progressives were later upset over the passage of a bill easing banking regulations and Haspel's confirmation. Schumer voted no but didn't try to stop centrist Democrats from voting yes - a strategy that bears a resemblance to his approach to Kavanaugh.

"The goal of the leader is to do things that don't divide the caucus so why would you divide the caucus?" said one Senate Democratic aide, who spoke on the condition of anonymity to be candid.

In the interview, Schumer said his priority for the rest of the year is the spending bills to keep the government operating.

Schumer's place in the party beyond the midterms is uncertain. Democrats appear to have a better shot at winning back the House than the Senate, giving Minority Leader Nancy Pelosi of California or another House member the opportunity to become the most powerful Democrat in Washington.

Some Democratic Senate candidates in red states have kept Schumer at arm's length. Arizona Rep. Kyrsten Sinema said she would not support him for leader. In Tennessee, former Gov. Phil Bredesen said he is undecided.

Sen. Brian Schatz, D-Hawaii, one of the youngest and most liberal members of the Senate, likened Schumer to an effective "passing point guard" in basketball, who excels at assisting others.

For now, though, the court fight looms largest for Schumer. Few are predicting a smooth road ahead.

"He starts with the deck stacked against him," Durbin said. "And even holding all of his own becomes a major challenge."