An everyday encounter made brighter by a good question: 'Do you have a story for me?' 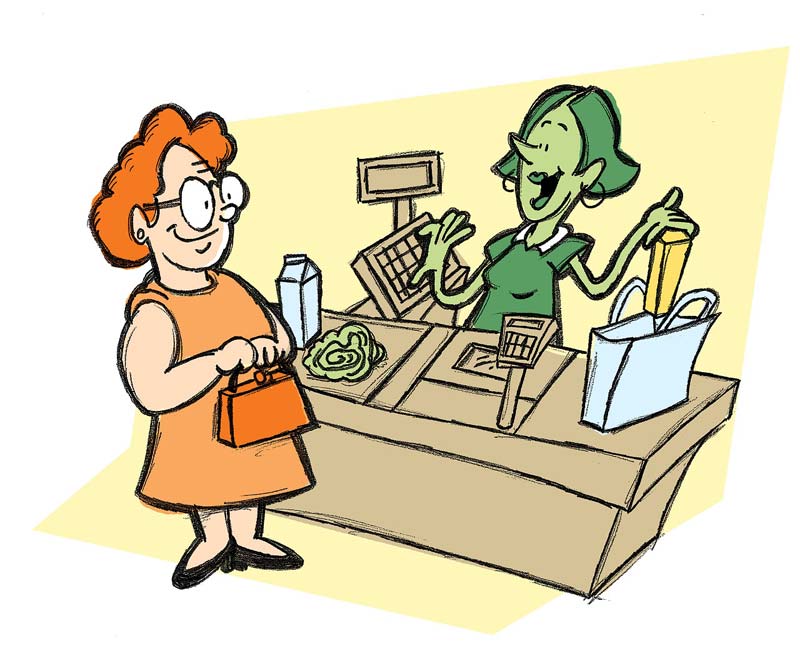 The cashier at the had a question.

It wasn't a purely transactional question, about whether I needed a bag or whether I'd like to donate my bag credit or whether I wanted a rubber band around the olives.

"Do you have a story for me today?" he said

For a moment I was stumped. What kind of question was that?

There are certain questions from a cashier that can feel as stressful as a pop quiz on advanced physics. One I've often been asked at the cash register is, "Any big plans this weekend?"

I've heard that at stores of various kinds, from the clothing shop to the grocery, and whenever I don't have big plans for the weekend -- which is a lot of the time -- I feel pressured to make my life sound more thrilling than it is.

I mean, does everybody else have big plans? Every weekend? Am I the world's most boring customer? Are other people exaggerating to the cashier just to avoid the embarrassment of saying, "Nope, no big plans"?

The Big Weekend Plans question is a relative of other stressful questions I've been asked at checkout counters.

"Going to any great holiday parties?"

"Going on any exciting vacations?"

"Having a great summer?"

These questions are well-intentioned and sometimes seem genuine. Other times they seem rote, as if they're in the store training manual.

Mostly they're variations on the standard "How's it going?" and yet they carry a greater burden of expectation, and I don't recall any of them ever launching a memorable conversation.

But this question was different.

"Do you have a story for me today?"

That was a good question. It doesn't demand proof of an exciting life. It just called for a story. Everybody's got one of those.

The cashier's name was Pedro, or so I deduced from his name tag, and I knew I wasn't the only customer whose stories he was soliciting.

He'd asked the woman in front of me for a story. Hers involved going to the gym and as he efficiently did his job, they had a spirited conversation about working out.

Now it was my turn.

"I do have a story!" I chirped, and as Pedro slid the lettuce, tomatoes and cheese across the belt, scanning and pecking at his keyboard, I surprised myself by telling him I was stocking up on food for my brother, who was coming to visit from his home in .

"!" Pedro said, then spoke a few words of Russian, which he told me was all the Russian he knew. I told him it was more Russian than I knew. Where had he learned his?

"Movies, videos," he said, adding that he learned snippets of lots of languages that way.

As he continued to scan and bag -- with impressive multitasking talent -- he told me he speaks three languages for real. When I asked which ones, he said Spanish, English and French.

English was obvious. Spanish I might have guessed. But French?

We chatted in French for a while, and by the time he said, "Do you want your receipt?" the day felt brighter, and all because he'd asked for a story.

When the writer composed her famous line, "We tell ourselves stories in order to live," she wasn't thinking of cash registers and grocery stores.

But the stories we tell ourselves and each other make it easier to live, often in unlikely places and moments, like the checkout line. My conversation with Pedro left me thinking about how much more interesting any encounter is when you elicit someone's story.

One reason Pedro's question worked on me was that it seemed genuine.And he didn't just ask. He listened. He responded.

"You must get a lot of interesting stories," I told him.

I pushed my cart away thinking that the world would be better -- calmer, more interesting -- if more of us followed his example.

Try it. Ask someone, "Do you have a story today?"

As for Pedro, I hope he keeps asking the question and keeping notes. He's got the makings of a novel. He could call it "Grocery Stories."