Why is Rand Paul, of all people, Trump's biggest defender on Russia? 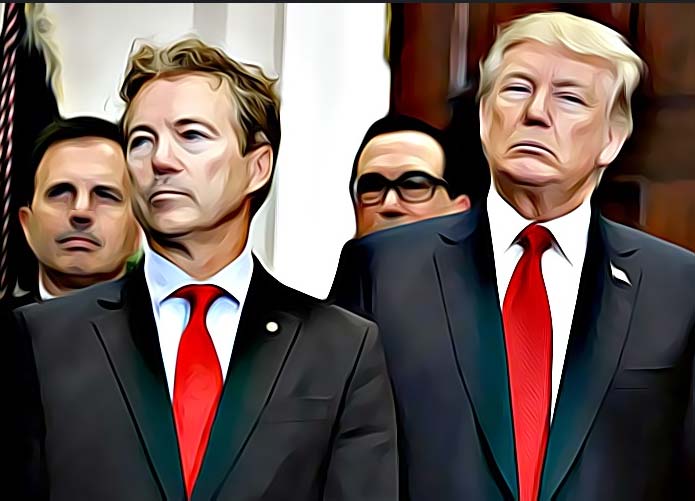 Coming off his summit with Russian President Vladimir Putin, President Trump has just a handful of defenders back home, even within his own party. Of those defenders, no one has been more vocal -- and seemingly more out of the blue - than Sen. Rand Paul, R-Ky.

Paul has given nearly a dozen interviews over the past several days championing Trump's decision to meet one-on-one with Putin. He has maintained his support for that decision even as Trump appeared to defer to Putin over his own intelligence agencies on whether Russia meddled in the 2016 election.

In an interview Monday with CNN's Wolf Blitzer, Paul refused to answer the same question Trump got: "Who do you trust [on election meddling], the American intelligence community . . . or Putin?"

"What I would say is that all power needs to have checks and balances and I think our intelligence community has way too much power," Paul said. (This interview happened before Trump tried to claim Tuesday that he misspoke when he gave Putin the benefit of the doubt.)

Paul is not among Trump's top defenders on a daily basis. The two aren't known to be close. Paul ran against Trump to be the Republican presidential nominee in 2016. Last summer, Trump singled Paul out as an antagonist during the Obamacare repeal debate. So why is Paul, of all people, defending the president in one of Trump's most controversial moments to date?

The answer seems to come down to two factors for Paul:

First: The end justifies the means. By that, I mean Paul would much rather have the United States and Russia talking to each other to try to solve big issues -- North Korea, Syria, nuclear nonproliferation - than not talk to each other. The way Paul sees it, Trump's diplomatic mistakes on the world stage are less important than the fact Trump and Putin are talking. Paul, a noninterventionist with a strong libertarian streak, believes engaging with pariah global powers is more productive than punishing them. And everything, even the special counsel's Russia investigation into election meddling, pales in comparison to that goal.

"I think it's a good idea for us to have conversation even with our adversaries," he told "PBS NewsHour's" Judy Woodruff in an interview that aired Monday.

That's pretty much word for word what Trump said Monday alongside Putin: "Too often, in both recent past and long ago, we have seen the consequences when diplomacy is left on the table," Trump said.

Second: The stars are lining up for Paul in a way they haven't before. His noninterventionist beliefs are typically way outside the mainstream in Washington. Suddenly, they align with none other than those of the president of the United States. So why not take full advantage of this moment to elevate his worldview? And the best way to get attention is by doing what no one else is: Defending Trump. All the better if that interview creates some controversy.

That could explain why, in many interviews, Paul not only agrees with Trump's foreign policy approach, but he seems to goes out of his way to defend Trump from what he says are partisan attacks:

"I think there's a bit of Trump derangement syndrome," Paul offered to Blitzer.

Paul also repeatedly says he and Trump share the same level of skepticism of U.S. intelligence agencies, which is probably the most eyebrow-raising thing Paul could have said after defending Trump.

To many Trump critics, the fact that the president appeared to side with Putin over his own government on Russia meddling was the most egregious part of the whole summit.

Paul is a senator who marches to the beat of his own drum. He's a wild card on any number of critical votes in the Senate, as prone to stage a filibuster as fall in line and vote for something. In February, the government shut down for a night as Paul filibustered a spending bill that nearly every other Republican had agreed to.

Now, Paul could be a deciding vote on whether Trump's Supreme Court justice nominee, Brett Kavanaugh, gets approved. Republicans can only afford one or two defections if all Democrats stick together, and Paul is out there saying he is "very worried" about Kavanaugh's previous rulings on national privacy, another top Paul issue.

Paul is also extremely adept at getting the media's attention.

In May of last year, he went on a somewhat quixotic crusade across the Capitol, dragging a copy machine and a horde of reporters with him, to find a closely guarded piece of legislation in the House to repeal Obamacare.

When you consider Paul's penchant for controversy, savvy ability to get media attention and inclination to seize a rare moment to elevate his own views, it's less surprising he's Trump's biggest defender on Russia.

But what Paul's critics say the senator misses in the process is that Trump isn't just attempting to reset relations with Russia, like Paul wants. Inadvertently or not, Trump is completely upending the world order -- and the United States's position near the top of it, they argue. Paul is nearly alone in Washington in thinking that those means are worth what Trump did Monday.