Want to be a pundit, Comey? Be careful what you wish for 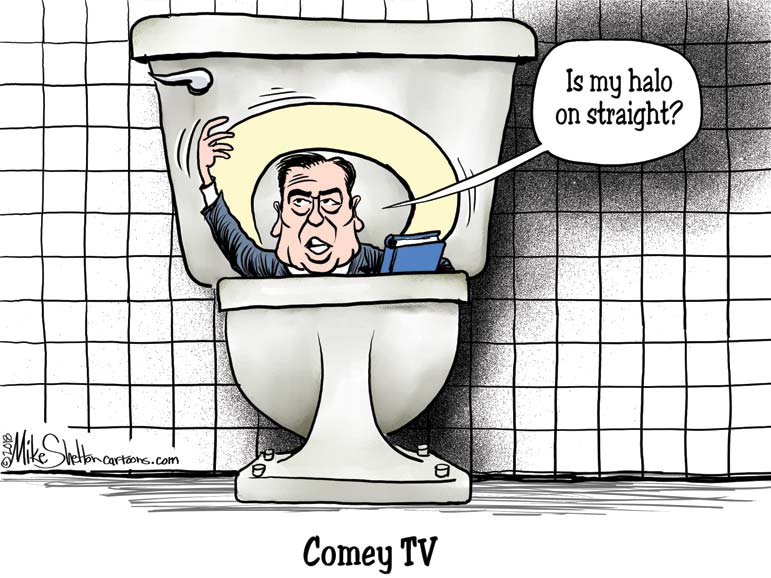 It's abundantly clear the former director of the Federal Bureau of Investigation missed his calling.

Instead of America's top detective, what James Comey really wanted to be was a political consultant, or some other job (pundit, maybe?) that involves adjusting the dials of public opinion.

A Comey tweet on Sunday advised Democrats - for whom he tweeted a midterm election endorsement a week earlier - "don't lose your minds and rush to the socialist left." That would only play into the hands of "this president and his Republican Party," Comey warned.

The tip was less than well received among left-wing Dems, who pointed out that the last time the former G-man tried to manage the electorate's thinking was in 2016, when he produced a pair of ill-advised statements about FBI investigations of Hillary Clinton.

The man does have a knack for zigging when what he really needs to do is zag. In fairness, though, it's hard to control the urge to kibitz when so much is on the line in American politics.

And it's easy for an amateur to feel qualified to do it, when political professionals themselves seem even more than normally clueless about how to proceed.

Before the campaign gets even more fevered, it might help to step back and consider how and why the impending midterm elections figure to be more consequential than usual, and to be waged under conditions of greater-than-usual uncertainty.

What's at stake in 2018 goes beyond control of the House, Senate and statehouses, important as that is. Up for grabs as well is our basic understanding of how American politics works now.

By now, everyone has a theory about why this particular bolt of lightning struck. Some of these revolve around what you might call conventional factors: overreliance on flawed data by the Clinton campaign, the candidate's own voter-repelling foibles, even Comey's interventions.

If you're a Democrat and you attribute Trump's victory to conventional causes, you might tend to rely on conventional campaign tools this year: Bank on Trump's historically low approval rating, plus the fact that the president's party almost always loses House seats in his first midterms, stake out a broad anti-Trump message and get your voters to the polls.

If, however, you're a Democrat and you have a different theory - that Trump won because he offered voters a combination of unabashed white identity politics and magical cures to economic woes- your job gets simultaneously easier and harder.

You're liberated to offer voters Medicare for all, free college, a $15 minimum wage - the full Bernie - in the hope the goodies add "white working class" support to your base of women, Latinos, African Americans and the LGBT community. The problem: What if Comey is right, and that agenda is too radical for what he called "America's great middle"?

If Democrats come up empty again in 2018, not even retaking the House despite so many "blue wave" forecasts, epic demoralization and desperation may set in.

On the Republican side, the dilemma is less acute, in that it's increasingly clear to Republicans how to motivate the party base: Stick with Trump.

All that requires GOP candidates to do is sell out what's left of their party's principles. If these candidates lose, they will have sold out for nothing but at least will have recovered the chance for some independence from Trump. If Republicans win - well, they will be Trump's political lackeys, and their party will be Trumpism's ideological vehicle.

The 2016 election destabilized both political parties. The two institutions we have relied on, for decades, to vet candidates, formulate mainstream ideology and organize citizen participation were revealed as having lost their ability to perform those functions. Trump conducted a successful hostile takeover of the GOP, and Bernie Sanders came close in the Democratic primary.

This happened because the electorate itself had been destabilized by a 21st century marked by terrorism, war, financial crisis, media upheaval, drug addiction epidemics, mass immigration and rapid cultural change.

Political consultants don't get paid to admit, publicly, that they're at sea; that admission comes out only in private. Their predicament resembles that of the Hollywood moguls in screenwriter William Goldman's memoir: "Nobody knows anything. Not one person in the entire motion picture field knows for a certainty what's going to work. Every time out it's a guess - and, if you're lucky, an educated one."

For now, the parties are making their guesses uneducated by anything but the results of the 2016 election, whose meaning, like the polls conducted since, remains open to interpretation. Was it an aberration or the start of a new normal? Fresh data, in the form of real votes, arrives on Tuesday, Nov. 6.