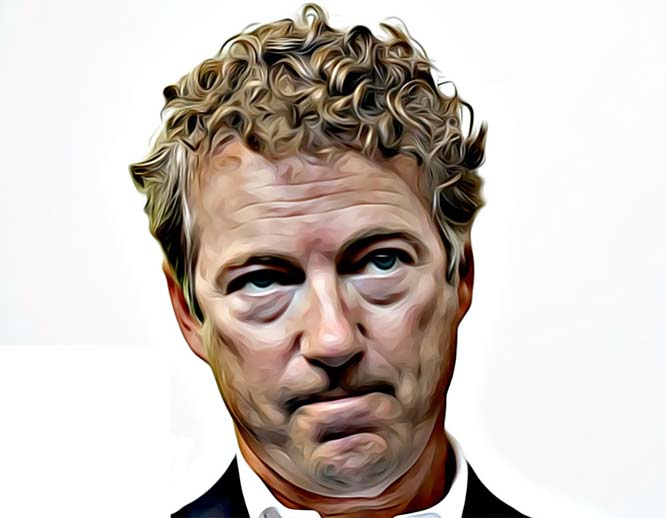 Sen. Rand Paul of Kentucky is taking a load of grief for being one of the few Republicans standing up for President Donald Trump over that steaming mess in Helsinki.

Now even Trump doesn't stand up for Trump, lamely walking back his controversial comments after taking a merciless, and deserved, whipping in the media.

As Trump stood next to Putin at the summit in Helsinki, reporters asked him if Russia had meddled in the 2016 election. American intelligence services and Congress have determined that yes, the Russians meddled.

On Monday in Helsinki, Trump said he did not see why Russia would have meddled. On Tuesday, he offered this pathetic excuse.

"I said 'would' instead of 'wouldn't,'" Trump said in a failed attempt at sincerity, like when he was pretending to care about corrupt onetime Illinois Gov. Rod Blagojevich on "The Celebrity Apprentice."

Yet, even during the Trump beatdown, Paul remained undaunted in supporting Trump for reaching out to Russia.

"I think that it is a good idea to have engagement," Paul told CNN. "And I think that what is lost in this is that I think there's a bit of Trump Derangement Syndrome."

Paul noted similarities with how President Barack Obama tried to push a "reset button" with Russia early in his first administration in an effort toward better relations with Russia. "And I think it's lost on people that they're a nuclear power. They have influence in Syria. They're in close proximity to the troops in Syria. They are close to the peninsula of North Korea and may have some influence that could help us there," Paul said.

Putin's Russian oligarchs are being squeezed by U.S.-backed economic sanctions. That puts pressure on Putin. A worried bear is a dangerous bear, especially when it has a nuclear arsenal.


Paul stubbornly defied Trump's angriest critics, from those on the far left to former leaders of the so-called "intelligence community" and those of the Republican establishment who want to expand NATO and push that bear around. Paul dismissed them simply as "people who hate the president."

I disagree with Paul on one key point.

Trump's public equivocation in Helsinki was disgusting and obsequious. It was also shocking, coming from a man who built his public persona on being unequivocal.

While the left suffers Trump Derangement Syndrome, the Trumpian right is infected too, deranged in believing Trump plays 3-D chess while the rest of the world plays checkers.

Stop it. Trump humiliated himself. Stop defending it.

But Rand Paul's stubbornness on Russia also reminded me why I wanted him to win the Republican presidential primary. I hoped Paul would defeat the war-party neo-con enablers who've led us into needless, tragic and costly wars.

The GOP establishment loathed Paul, painting him as a "dangerous isolationist." They were amused by Trump at first, thinking they could use Trump to flatten the field and insert Jeb Bush. They were wrong, as they were about Iraq.

And by the time they figured things out, Trump, the orange vulgarian, was at their establishment's gates.

The thing about Paul is that he hates being stampeded. And that's what's happening here, with Trump and Russia, a media/political stampede.

Putin would skin you alive to keep power. The ruthless former KGB thug is the author of misery from Ukraine to Syria. His agents allegedly hacked Democratic National Committee servers to hurt Hillary Clinton's campaign.

But Clinton didn't lose the election because of the Russians. She lost because she was a lousy candidate.

Trump's sin is that he defies the foreign policy establishment and neo-cons who dangerously seek to expand NATO, pushing confrontation with Russia. That's heretical.

With so many disparate voices shrieking that Trump is a traitor, Paul let fly his stubborn streak.

"I've said this before, and I'll say it again," Paul told CNN. "Any country that can spy, does, and any country that can meddle in foreign elections, does. All countries are doing this. But we've elevated this to a higher degree, and we have made this all about the sour grapes of Hillary Clinton losing the election and it's all about partisan politics now. This is truly the Trump Derangement Syndrome that motivates all of this."

Helsinki was a gift to the president's domestic political enemies, among Republicans and on the left, sending a thrill up and down their legs.

Is there good reason to critique master intriguers such as former CIA boss John Brennan, a bad actor, and onetime National Intelligence Director James Clapper, who lied to Congress about surveillance of the American people? Yes.

But Helsinki wasn't the place to do it. In Trump world, it's all about Trump, and all about insisting he had nothing to do with the Russians in 2016, all about defending himself from the charge that his presidency was illegitimate.

In Helsinki, his task was to put the nation first. He put his wounded ego first.

And still, there is that stubborn Rand Paul.

"I think people have gotten over top on this and lost the big picture. The big picture is that we should be engaged with Russia," Paul said. "We have serious conflicts in various parts of the globe. It would be a mistake not to have open lines of communication with them . . . to make sure that we don't accidentally stumble into war."

Paul isn't magnetic. He has terrible hair. He purses his lips when listening to idiots. A personality cult won't be built around him.

But he is one stubborn man who won't be stampeded.