How to maintain the republic? Originalist justices like Brett Kavanaugh 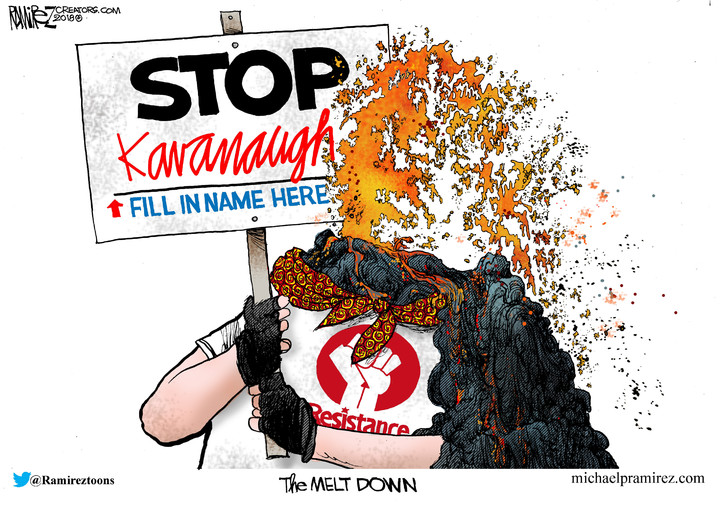 The best argument for the necessity of constitutional originalists on the is right before our eyes.

You can see it in the news, in our political discourse; you hear the shrieks of it everywhere: It's the hysteria of the American left over the loss of power over the nation's highest court. And now they've finally become quite unhinged.

President nomination of conservative judge has pushed them over the edge.

Not all liberals are hysterical. Some are trying to be intellectually honest, in thanking those most responsible for Trump being able to shape the court: Like , the former Democratic majority leader from . And former President , Democrat from .

It was Reid who blew up the old filibuster rules to help Obama pack the federal courts with liberal judges.

Liberal Bloomberg pundit advised to "look in the mirror."

" set the stage for their powerlessness to affect the court choice," Hunt wrote the other day, "and their reaction just deepens their political anguish."

When he was in the and his party was in control of , Obama couldn't resist rubbing it in, like some political boss in a roomful of broken elbows. And he set the stage for all this a few years earlier, in a closed-door meeting with when had the power.

"Elections have consequences," he snapped, "and at the end of the day, I won."

And breaking established precedent to serve short-term political goals like packing the lower courts with liberal judicial appointees has consequences, too. And now hold the .

These days, as gnash their teeth and pull their hair and their media friends announce the end of the world is at hand, there's only one thing missing: an inscription carved in stone, under the faces of Obama and Reid, with a line from a poem we read as children:

"Look on my works, ye mighty, and despair!"

I would lift a glass to such a touching monument. It would be a dry martini made of liberal tears. On the rocks, with three jalapeno/garlic olives -- shaken, not stirred.

So tasty. But only one. Moderation in all things is best.

Unfortunately, moderation is an unknown concept to many now. But their outrage over the Kavanaugh appointment can be entertaining political theater, like those protesters who dressed up in costumes from "The Handmaid's Tale."

They wore those ridiculous potato chip bonnets and warned that the will soon transform all American women into breeders controlled by bloodless patriarchs.


Just a little bit over the top? Perhaps. Roe v. Wade isn't going to be overturned anytime soon. Just screaming it out doesn't mean you understand how things work. At least those potato chip bonnets were nice.

But there's another side of the face of the left, a face of rage worthy of . And it howls that America is a monstrous nation and that an orange-haired demon has turned us into the country of the damned.

The rage is driven by the realization that Trump, who, without a conservative bone in his body, is governing as a conservative, with cuts to taxes and government regulation and a strict enforcement of borders.

And he's shaping a conservative that may last for generations, thanks to the Harry Reid rules that Democratic senators, from of to of , were only too eager to use when they had juice.

All this is just too much for the left. It has finally dawned on them that they've lost the .

For decades, the left couldn't get what they wanted through legislation, so they used activist courts to push their agenda instead.

Kavanaugh was the safe choice, a child of , a loyalist in the George W. Bush , a conservative recruited by liberal Justice to teach the law at . And he was an altar boy, and has a beautiful family, and feeds the poor.

Good luck, . Perhaps you can ask Kavanaugh if he, too, is an "orthodox Catholic."

When Kavanaugh is confirmed, the left will no longer be able to rely on demigods in black robes to make law from the bench.

Instead, will have to push policy agendas the old-fashioned way, through legislation in statehouses and in , after convincing the American people of the rightness and reason of their policies.

Once they get legislation passed, they'll have to get it signed into law and hope such law is consistent with the .

What's wrong with that? Nothing.

I don't want the to give me a victory over those with whom I disagree. All I want is for the court to interpret the as it was written, as it was intended, to protect all our liberties, not just those on one side or the other depending on the political whims of the moment.

The is what protects us from our own passions and politics. Isn't that what's best for the country?

Persuading your fellow Americans to join you in pursuit of legislation -- hashing things out, compromising and building consensus so that half the country doesn't feel it has been tricked and betrayed -- is the best way.

It is the way our republic was designed. Our republic, if we can keep it.