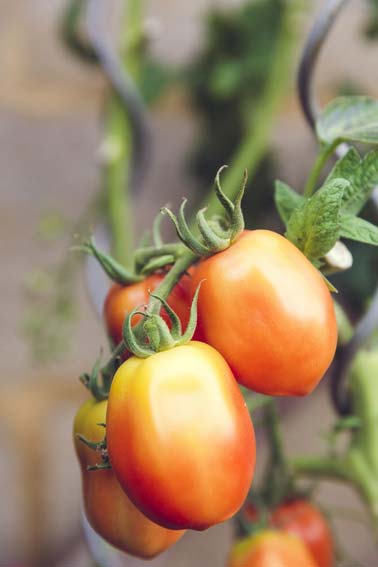 Out in the backyard tomato garden, I keep things simple and apolitical:

Tomato tape in one pocket, clean scissors to prune the suckers, a hoe, a few old bamboo sticks to help train the cucumber vines back up the trellis where they belong.

A trellis is the best way for cucumbers. You can see the cucumbers, they're easy to pick. And they're not hiding under the leaves on the ground, where a forgotten can go to seed and shut down the vine.

Tomatoes? Cage or stake them. Onions in a row. Basil, too. All I need is to find an anchovy tree -- who doesn't like anchovy in a tomato-and-onion salad?

Out back where I go in the mornings, the birds are singing, but there's one thing I don't hear:

Tomatoes aren't big on virtue signaling. The onions don't complain about hate mail. They don't whine about something the basil said. The cucumbers? They go where they're told.

What they won't do is mob up and demand that the Supreme Court ignore the law -- just so they'll get what they want -- and turn the garden into some chaotic weed patch.

That I will not abide.

I am the chief justice here. Water, fertilizer, a few words of encouragement and care is what they get. But the law is the law. And at the end of the law, there is a sacred clause that allows me to eat them.

So they wait for me, the man in the floppy hat, in the mornings.

A few weeks ago, I found a wilding and let it live, for am I not merciful? It must have sprouted from a fallen seed.

A colleague whose father is a farmer gave me one of his heirloom tomato plants last year. I planted it in the front row. The wilding might be one of these.


Meanwhile, Zeus the Wonder Dog keeps the rabbits at bay. This year's rabbit horde is large, meaty and especially stupid. One exceptionally stupid rabbit began digging a nest right in the middle of the yard.

It just sat there in the shallow hole in the grass and kept returning again and again, though I repeatedly warned it away. Zeus is a good neighbor. He's careful to mark the borders of his domain so there won't be any misunderstandings among the animal friends.

But this was a willful rabbit.

And the thing is, pride and rabbits just don't mix. It just sat there, stubbornly, as Zeus stalked it, silently. would have illustrated a story with a happy ending. But I'm not . Watercolors are not my metier.

That wilding I told you about is growing well. The seed landed inches beyond the garden fence. I'll probably help it along. You can't grow enough tomatoes.

The truth about tomatoes is that as you tend them, your thoughts tend to wander through a procession of chores.

You trim the suckers or hoe a few weeds, leaving the wild purslane alone for salads, and odd ideas come and go and topics for possible columns, like:

What does the murder of the Princess de Lamballe tells us about the politics of the mob?

And is that Rep. real hair?

Other issues of vital concern, like what kind of rub will I use on those ribs for ?

Maybe an authentic chocolate soda, with homemade syrup and the soda from a real soda machine. It's a forgotten art.

Or a fine Red Haven peach.

And port and a good cigar in the twilight and quiet to smoke it in.

winning the World Cup, with invited to the for cake baked and paid for by .

Not to be greedy, but I'd also very much like to have the good manners to send me a handwritten thank-you note. I sang a song of civility to her on my podcast, "."

What I'd really like is a standard email reply button for readers off their meds. Just press it and these words appear:

All I really wanted out of the presidential campaign was a one-on-one race between (liberty) and (big rock candy mountain).

Your servant in all things.

I'm not done. I want that beleaguered Red Zebra tomato plant in the back of my garden to live long and prosper until I eat it.

There are 23 tomato plants back there not counting the wilding: Red Brandywine, Beefsteak, Early Girl, Cherokee Purple, , Polish Linguisa, and more.

Betty thinks I may have overdone it.

They're all doing fine except for that Red Zebra. We've had buckets of rain lately and the water just pooled around the vine. The pool lingered for days. Then more rain came. The vine drooped off to the side. The leaves wilted.

Thursday's intense heat brought it back. The dirt around it is moist but not sodden. The leaves are perkier, the vine no longer droops.

As a famous gardener named Chauncy once said, "As long as the roots are not severed, all is well. And all will be well, in the garden."

Soon it will be time for the tomato, bacon and lettuce sandwiches. A garden may be apolitical, yes, but there's got to be a payoff.