What Are Democrats Running On? 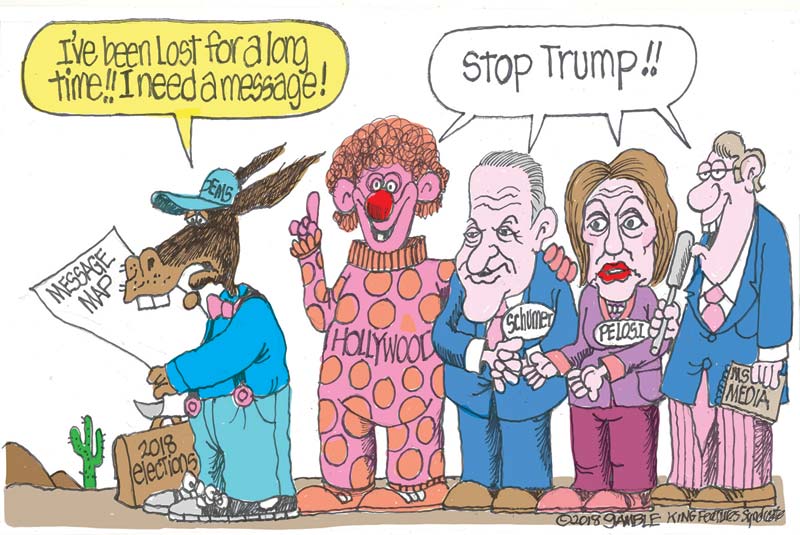 The 2018 midterms are fast approaching, and Democrats are still crowing about the coming "blue wave." If past is precedent, I suspect that this is just media-fueled propaganda. (Remember Hillary Clinton's 98 percent certainty of winning the presidency?) There has been recent news about how Democrats lead Republicans in voter registrations by a significant margin. But the larger question is not whether Democratic voters will turn out, but what it is they are being asked to vote for. What does the Democratic Party stand for these days?

We can look at the headlines for clues.

The latest Democratic wunderkind is 28-year-old Alexandria Ocasio-Cortez, a self-proclaimed "democratic socialist" (emphasis on "socialist") who has stretched the truth about her background, is explicitly anti-capitalism, and who has displayed remarkable ignorance about unemployment and about Israel despite degrees from Boston University in economics and international relations.

Democrats — once a reliable bastion of support for First Amendment rights — have largely abandoned them. (At least for conservatives.) In place of litigation and legislation to protect speech, Democrats now use their political power to silence speech they don't like and compel that which they do. You don't approve of gay marriage? Too bad. Democrats would — if they controlled the Supreme Court — force you to bake that wedding cake or arrange those flowers. Morally opposed to abortion and trying to offer pregnant women one of those much-heralded choices? Alas, you'd be forced to promote and advertise for abortion. Dare to stand up for your rights of free speech or free exercise of your religion? You'll find yourself accused of "weaponizing the First Amendment."

And the left has long since given up on the Second Amendment, which they now call to be repealed.

The left's callous disregard for the ability to defend one's self brings up Democratic positions on crime, homelessness and immigration. San Francisco is a bastion of leftist governance; the news is filled with headlines about its exploding homeless population, and corresponding problems with trash, used drug needles, and human urine and feces and all over the streets.

Baltimore — described by The Washington Post as a "Democratic stronghold" — has endured "years of record-breaking homicide rates" rivaling those of Chicago — another city run for decades by Democrats.

As recently as 2009, Democrats at the highest levels of government, including Barack Obama, Hillary Clinton and Charles Schumer, proclaimed the need for border enforcement. Now, the party's platform is to "Abolish ICE" and embrace de facto open borders.

Nearly 70 percent of Americans identify as Christian (another 7 percent expressly identify with another faith), but Democrats notoriously booed God (at least, reference to Him in their party platform) not once, but three times, at their 2012 national convention.

And Democrats' political hypocrisy is off the charts. The party stopped caring about personal character in its national candidates decades ago — Bill Clinton is the most salient example — but pretend to be outraged because Donald Trump has a potty mouth. They profess to want civility and truth in politics, but routinely lie about political opponents (and judicial nominees of Republican presidents).

Their latest Kabuki outrage is calling Trump a "traitor" for his statements at a press conference following a meeting with Russian President Vladimir Putin in Helsinki on July 16. But they never blinked when Obama sent $1.7 billion in cold hard cash to Iran — one of the largest sponsors of terror on the planet.

I get it. Democrats hate Donald Trump. But that is not a platform. Elizabeth Warren, Cory Booker, Kamala Harris and Bernie Sanders are all reportedly gearing up for a 2020 presidential run. Warren claims she'll "clean up the mess" Trump will have left behind. What mess is she referring to? Record low unemployment for blacks and Hispanics? Massive job creation? Reduced taxes for taxpayers (but record receipts for government)? Defeat of ISIS in the Middle East? (Defeating its ideology is admittedly another matter.)

Democratic politicians count on the party loyalty of third- and fourth-generation Democratic voters. But those voters — and others — are figuring out that the party left them a long time ago. The party, for its part, doesn't seem to get this. Voters expressed their discontent with Democrats in the 2010, 2014 and 2016 elections. In response, Democrats are doubling down on their worst impulses, and the Pravda press is dutifully reporting that they're really gonna clean up in November

No wonder the #WalkAway movement is gaining such steam.