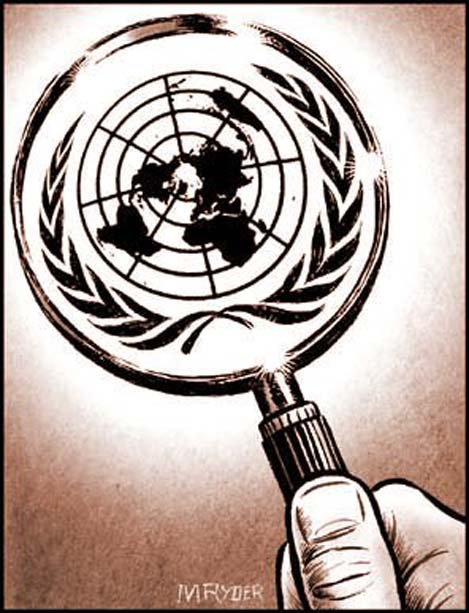 On Monday, seven former US ambassadors to the UN sent a letter to US Secretary of State Mike Pompeo insisting that the administration restore full funding to UNRWA, the UN agency that funds so-called Palestinian refugees.

Since UNRWA was established in 1949, the US has given nearly $5 billion to the agency tasked with perpetuating refugee status among descendants of Arabs who left Israel in the 1948-1949 pan-Arab invasion.

In January, then-secretary of state Rex Tillerson informed the UN that the US was slashing its assistance to UNRWA by 50%, from $260 million to $130 million.

The issue of UNRWA, and the US’s involvement with the group, hasn’t received much attention in the intervening months. But now that the former ambassadors have brought it up, it is worth taking a second look at UNRWA and considering whether they are right, and what their bipartisan position tells us about the bipartisan consensus that controlled US policy toward Israel and the Palestinians until President Donald Trump took office.

UNRWA and its supporters present the agency as an organization dedicated to supporting Palestinian refugees. But this is a lie.

UNRWA is a political warfare organization that deliberately perpetuates the misery of innocent people.

It indoctrinates them from the cradle to the grave to support and engage in terrorism and genocide against the Jewish state and its people. It exists not to help the descendants of Arabs who left Israel at its inception, it exists as a tool of political warfare in the never-ending war to annihilate the Jewish state. As then-Egyptian President Gamal Abdel Nasser said in 1960, “If the refugees return to Israel, Israel will cease to exist.”

UNRWA’s distinctively non-humanitarian purpose is baked in. Refugees worldwide are helped by the UN’s High Commissioner for Refugees. UNHCR targets its services to real refugees – people who meet the definition of the Refugee Convention of having lost their state home due to persecution. UNRWA targets its services to people of Palestinian descent it calls “refugees” for political reasons; fewer than 1% of the UNRWA refugees would actually meet the Refugee Convention definition.


The UNHCR is responsible for helping refugees find asylum and settle in another country. Today it cares for nearly 66 million refugees worldwide. It has one staffer for every 6,000 refugees.

Over the past 70 years, UNHCR has permanently resettled tens of millions of refugees. It found permanent homes for 189,300 refugees in 2016 alone.

UNRWA has resettled no refugees in its 69-year history.

It is now responsible for the fifth generation of descendants of the Arabs who left Israel in 1948-49.

Every dollar the US transfers to UNRWA is a dollar used to perpetuate this misery. And it is arguably a dollar spent in breach of US law. According to the US Law on Derivative Refugee Status, spouses and children of refugees can apply for derivative status as refugees. Grandchildren are explicitly ineligible for that status. But by funding UNRWA, the US funds an agency that has required the perpetuation of refugee status of the Arab refugees from 1948-49 for five generations.

Rather than reveal the number, which is estimated to stand at 20,000, or 1% of the number UNRWA claims, the State Department classified the figure in 2015. It still refuses to release it.

Former president Barack Obama’s administration’s position was to accept UNRWA’s numbers as true. The Obama State Department insisted that any accounting for the actual number of refugees or attempt to remove the millions of “refugees” who have been Jordanian citizens for most of the past 70 years from its refugee rolls, would be detrimental for chances of peace.

That is, despite the fact that during the 2008 presidential race Obama said he did not support the Palestinian demand that UNRWA’s “refugees” be permitted to immigrate to Israel and, as Nasser said, cause Israel to “cease to exist,” his administration’s actual policy was to legitimize this position. By refusing to reveal how many Arabs who left their homes in Israel in the 1948-49 pan-Arab invasion of Israel receive support from UNRWA, Obama enabled the Palestinians to insist that more than 5.2 million people, all but 20,000 of whom have never stepped foot in Israel and have no ties to the country, should be permitted to enter Israel as citizens and so destroy the Jewish state.

UNRWA’s existential rejection of Israel’s right to exist is not the only reason it is a deeply problematic, indeed, toxic organization. On a daily basis, UNRWA personnel and facilities are used to advance the physical annihilation of Israel.

UNRWA schools and clinics in Gaza have been used repeatedly by Hamas to store missiles and rockets and to launch projectile attacks on Israel. Several of their employees are senior Hamas terrorists. In the past year and a half, two senior UNRWA employees in Gaza were elected to senior leadership positions in Hamas. Funding UNRWA funds Hamas.

As multiple researchers have copiously documented over decades, UNRWA schools indoctrinate Palestinian children to hate Israel and Jews and to seek their annihilation. UNRWA employees throughout the Middle East praise terrorists, praise Nazis, and call for the annihilation of the Jewish people. By funding UNRWA, the US pays their salaries.

This brings us to the seven US ambassadors and their letter to Pompeo.

Oddly, they think this is a bad thing.

But it is a good thing.

Consider the case of Hamas terror master Suhail al-Hindi. Hindi was elected to a senior leadership position in the terror group in 2011 and reelected in 2017.

During this entire period, Hindi worked as principal of an UNRWA high school and chairman of the teachers’ union for UNRWA schools in Gaza.

UNRWA only fired him from his position as principal in 2017. For six years the agency ignored the problem hoping everyone would forget or not notice.

Why do the former ambassadors want US taxpayers to support a school system run by the likes of Hindi? Then there are the clinics they express such concern for.

During the course of Hamas’s 2014 war against Israel, on July 31, a team of commandos from the Maglan unit entered an UNRWA clinic in Khan Younis to seal an attack tunnel that was dug out from its floor.

Three soldiers, St.-Sgt. Matan Gotlieb, St.-Sgt. Omer Chai and St.-Sgt. Guy Algernaty, were killed when the clinic exploded on top of them. Twenty other soldiers were wounded in the blast.

The IDF discovered afterwards that Hamas-UNRWA constructed the clinic not only as the starting point of an attack tunnel, but as a booby trap. Twelve barrels, each containing 80 kg. of explosives were built into the walls.

Why do the ambassadors wish to build more UNRWA clinics? This then brings us to the question of the seven former envoys’ motivation in writing the letter in the first place. The seven wrote that ending US financial support for UNRWA will have “national security ramifications for our closest allies, including Israel and Jordan.”

This is true enough. But at least in Israel’s case, those ramifications would be positive. The less money UNRWA has, the less damage it can do to the Palestinians and to Israel. With less money, UNRWA can teach fewer Palestinians that they should strive to become suicide bombers. With less money, they can build fewer booby trapped clinics and fewer attack tunnels under the floors of their examination rooms.


With less money, UNRWA becomes a less attractive option for millions of Arabs for whom accepting cradle-to-grave welfare payments from UNRWA has substituted work as an economic model. “Employed” on the UNRWA dole, they have been able to take low paying jobs as terrorists.

Obviously, as former UN ambassadors, the seven signatories know all of this. So obviously, they weren’t motivated to write due to some sort of deep seated desire to improve the welfare of the Palestinians. They were also clearly not motivated by genuine concern for Israel’s security, much less for the cause of peace between Israel and the Palestinians.

Indeed, given what we know – and what they know – about UNRWA, it is impossible to attribute any positive justification to their actions. Rather, the only logical explanation for their decision to sign and send the letter to Pompeo is that they want to perpetuate US assistance to UNRWA because they like what it does. They think it is a good idea to doom Palestinians to perpetual misery and ensure that they will never, ever accept Israel’s right to exist in secure borders unmolested by war and terrorism and demonization.

That is, like UNRWA, the seven former senior diplomats were motivated by rank hostility to Israel. This is remarkable.

Power, Rice, Pickering, Perkins, Albright, Richardson and Negroponte represent the top tier of Washington’s bipartisan foreign policy clique. Together, they have played key roles in shaping US policy towards Israel for 30 years. And they like UNRWA.

Furthermore, Pompeo should declassify the data on the actual number of Palestinian refugees and he should call for their cases to be dealt with by the UNHCR, without prejudice. And then he should announce that out of concern for the welfare of the Palestinians and in the interests of peace and regional security in the Middle East, the US believes the time has come to shut UNRWA down completely.