What we know about what Trump and Putin agreed to 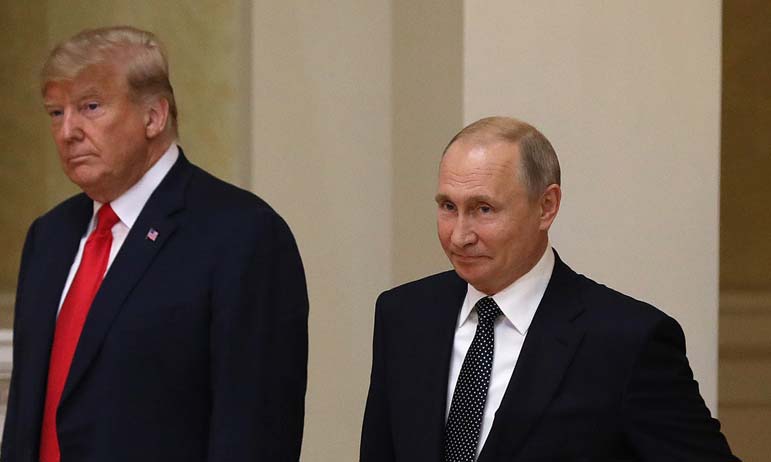 For two hours on Monday, President Donald Trump and Russian President Vladimir Putin met in private, with only interpreters there to hear their conversation. No aides, no press - just the two leaders and their translators, discussing who knows what.

This tete-a-tete was viewed as problematic well before it took place. When it was announced that the two leaders would meet alone, it immediately struck many observers as unusual, particularly given the outstanding questions about the relationship between the two during the 2016 election. The White House told CNN that there were a few reasons that Trump wanted it this way: To assess Putin better, to avoid interjections from more hard-line staffers and because "he didn't want details of their conversation to leak."

So far, they haven't. We have only hints of what the two leaders discussed in private, gleaned from their news conference and from interviews with each that followed.

The result is that tweets like this from the Russian Embassy in Washington are particularly cryptic:

"The Russian Defense Ministry @MoD_Russiais ready for the practical implementation of agreements in the area of global security reached in Helsinki between Russian President Vladimir Putin and US President Donald Trump," the embassy wrote on Twitter.

We looked at three transcripts to suss out what's been made public. They are:

• The Bloomberg Government transcript of the post-meeting news conference

• The transcript of Fox News's Chris Wallace's interview with Putin

• The transcript of Fox News's Sean Hannity's interview with Trump.

They are identified below as [CONF], [WALLACE] and [HANNITY]. (Trump's interview with Fox News' Tucker Carlson that aired Tuesday didn't address the conversations between the two leaders to a large extent.)

We are taking at face value the presentations each leader made: If Putin said something at the news conference that wasn't challenged by Trump, in other words, we're assuming it was discussed and agreed upon.

What we know Trump and Putin discussed:

• "[S]trategic stability and global security and nonproliferation of weapons of mass destruction," according to Putin, who said he gave the U.S. "a note with a number of specific suggestions." [CONF]

• Non-placement of weapons in space, per Putin - probably a response to Trump's push for a "space force." [CONF]

• Reestablishment of a joint working group on terrorism. [CONF]

• "A plethora of regional crises," including Syria, North Korea and Ukraine. Putin suggested that the U.S. should push Ukrainian leaders to implement the Minsk Agreements of 2016. [CONF]

• The Iran deal and the U.S.' withdrawal from the agreement. Trump said he emphasized the importance of putting pressure on Iran. [CONF]

• Creation of "an expert council that would include political scientists, prominent diplomats and former military experts from both countries who would look for points of contact between the two countries and would look for ways on putting the relationship on the trajectory of growth," per Putin. [CONF]

• Sales of natural gas from Russia to Europe, including the transit of gas through Ukrainian pipelines. [CONF]

• The humanitarian crisis in Syria and the two countries' joint efforts there. [CONF]

• The annexation of Crimea, which Trump asserted was illegal (according, oddly, to Putin). [CONF]

What we know Trump and Putin agreed to:

• Protection of the border between Syria and Israel and a return to the 1974 agreement on disengagement. [CONF] --Creation of "a high-level working group" of business leaders from each country. [CONF]

Maintenance of lines of communication aimed at combating terrorism. [CONF] This included the eradication of the Islamic State. [HANNITY]

• A commitment by Putin to work with the United States on North Korea. [CONF]

• A follow-up meeting including members of each country's security councils. [CONF]

• Putin will "look into" the allegations against 12 intelligence officers, indicted by Special Counsel Robert Mueller's grand jury. [CONF] Trump embraced Putin's suggestion that Mueller be allowed to come interview those individuals - though Putin said that, in exchange, Russia should be allowed to interview Americans it accuses of crimes. [CONF] Trump didn't commit to that, but said he was "fascinated by it." [HANNITY]

In the days since that summit, Russia has moved forward on this contentious idea, including announcing plans to charge several Americans, including former Ambassador Michael McFaul, with financial crimes. During the news conference after the summit, Putin made reference to his longtime nemesis Bill Browder - a reminder that those the Russian government most wants to charge with crimes are often those who are the sharpest critics.

Speaking of the treatment of critics of Russia, it's also worth noting what wasn't discussed during the two-hour private conversation, according to those later reports.

What wasn't discussed or wasn't mentioned:

• No mention was made of any discussion about the poisoning of former Russian intelligence official Sergei Skripal and his daughter. The attack, which took place on British soil, is seen by the U.S. allies as an egregious event. It spurred the expulsion of Russian officers from the U.S. and other Western countries earlier this year.

• No mention was made of any discussion about the sanctions imposed by the United States following the annexation of Crimea.

That Trump reiterated the American position on Crimea suggests that they subject was unnecessary. But this is a critically important question: Discussion of lifting those sanctions has been an undercurrent to the question of whether the Trump presidential campaign colluded with Russia's interference efforts in 2016.

With no one else in the room for those two hours, we may never know if and how the subject was broached.