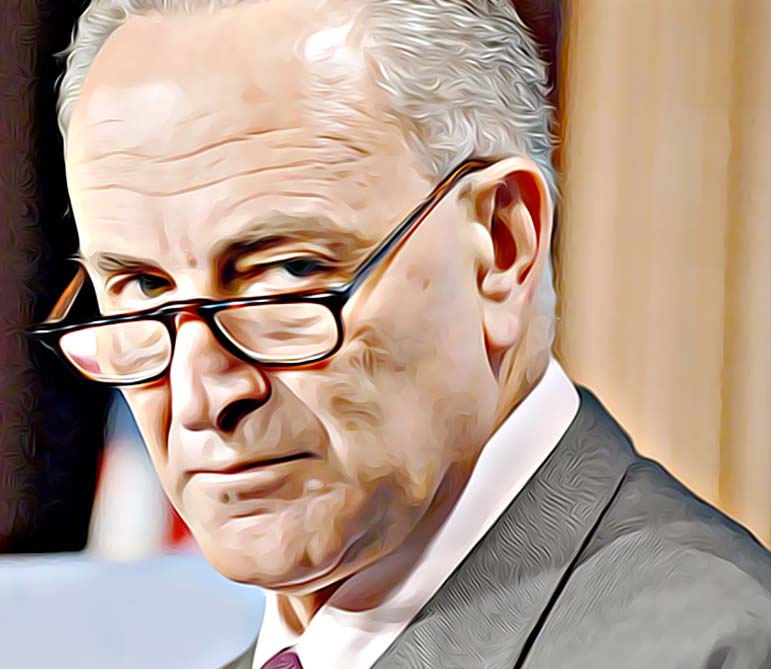 Those are not words I ever expected to write. The leader of the Senate Democrats is a smart cookie (perfect SAT score: just ask him!) from Brooklyn back when Brooklyn was Brooklyn, before the arrival of manbuns and artisanal cheese.

He's the son of an exterminator, pronounced 'stermunatuh. Clearly, Schumer has plenty of brains and street savvy to take care of himself; the last thing he needs is pity from the sort of person who uses a semicolon.

But what a fix he's in with President Donald Trump's nomination of federal judge Brett Kavanaugh to the Supreme Court. The donors and activists of his party's base are pushing him to maintain a united front against the conservative nominee. But if Schumer delivers, he might forfeit his chances of leading a Democratic majority in the foreseeable future.

That's quite a prediction, given that the guy needs only two additional seats to take possession of the majority leader's magnificent office with its sweeping views of the Mall - and control of the Senate's business. Last year's implosion by Alabama's wackadoodle Roy Moore cut the Republican advantage to a mere 51 to 49.

But Schumer's tide may be going out. The coming midterm elections, less than four months away, could hardly be less favorable for Senate Democrats, whose incumbents are defending 10 seats in states that went for Donald Trump in 2016. Only one Republican incumbent is running in a state carried by Hillary Clinton.

Now the likely timing of the Kavanaugh confirmation vote - Majority Leader Mitch McConnell, R-Ky., is promising to get it done in September - adds to the peril for Democrats in toss-up races on red turf. Claire McCaskill in Missouri, Heidi Heitkamp in North Dakota, Joe Donnelly in Indiana, Joe Manchin in West Virginia, even Bill Nelson in Florida and Jon Tester in Montana, could really use a pass from Schumer to escape the no-win dilemma of choosing between the demands of their party and the leanings of their constituents.

And make no mistake: A vote against Kavanaugh will be highly controversial in those states. Kavanaugh, 53, has impeccable credentials after 12 years of service on the second-most-powerful court in the land, the U.S. Court of Appeals for the District of Columbia Circuit. The worst thing Democrats can honestly say about him is that he is a strong conservative. That's praise in Trump Country.

What's more, the White House rolled out the selection with a degree of polish and skill hitherto unseen in this administration. The president himself was the impresario, using suspense to build a prime-time audience for an unveiling worthy of "The Bachelorette."

After an extended standing ovation from the hand-picked East Room audience, Kavanaugh targeted his simple and effective speech directly at Republican and independent women - the keys to any faint hope Schumer might harbor of swaying Republican Sens. Susan Collins of Maine and Lisa Murkowski of Alaska to help block confirmation. The judge portrayed himself as the son of a strong mother, husband of an accomplished wife, father of spirited daughters and fan of women's basketball to boot.

Schumer knows deft messaging when he sees it. And if the sight of a smooth-running Trump operation wasn't enough to convince him that Kavanaugh won't be stopped, a headline in his hometown newspaper ought to have. "A Liberal's Case for Brett Kavanaugh," by the influential Yale Law School professor Akhil Reed Amar, was a doubly strong endorsement by virtue of its appearance in the New York Times.

Despite these signals to move cautiously, Schumer leaped to Twitter to declare war: "I will oppose Judge Kavanaugh's nomination with everything I have. . . . The stakes are simply too high for anything less."

This was a mistake.

A wise leader preserves options - including the option to fall back and fight another day on more favorable ground. Schumer's base-pandering makes strategic retreat nearly impossible. If, in a few weeks, Kavanaugh's nomination is humming along, a leader with room to maneuver could give cover to those endangered Senate Democrats by joining them in supporting the fait accompli. Instead, Schumer has left them high and dry in hostile territory.

Should Schumer ultimately lose three, four, five seats in November, he will have a very hard time making them up. Democrats are in danger of losing at least one seat in 2020, when Alabama Republicans will try to undo the damage of the Moore fiasco. As for chances to gain seats, pickings appear slim in 2020 and slimmer in 2022.

The irony here is that Schumer's base is only hurting itself. If a doomed stand against Kavanaugh strengthens the GOP's hold on the Senate, conservative judges will be easier to confirm - and liberal ones more difficult, should a Democrat capture the White House. Perhaps there's still time for Schumer to think long term. As they used to say in Brooklyn: Wait till next year.